“Contractors should not be surprised if nonresidential construction materials prices bounce back significantly over the next several months.” —ABC Chief Economist Anirban Basu. 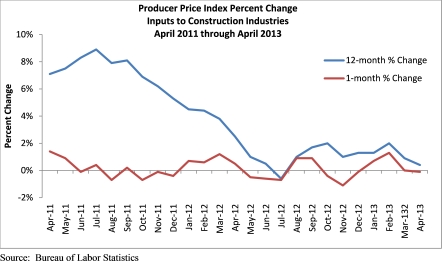 Nonferrous wire and cable prices dropped 3.5 percent for the month and are down 4.2 percent on a year-over-year basis. Prices for plumbing fixtures and fittings slipped 0.5 percent compared to March, but are 0.8 percent higher than April 2012 prices. Prices for fabricated structural metal products decreased 0.4 percent for the month and are down 0.9 percent compared to one year ago. Iron and steel prices slipped 0.3 percent in April and are 9.3 percent lower from the same time last year. Steel mill product prices are an exception to the trend for metal prices, as they increased 0.4 percent for the month but remain 8.9 percent lower than the same time last year.

In contrast, crude energy prices increased 3.7 percent as natural gas prices jumped 15.5 percent. Year over year, crude energy prices are up 8.4 percent. Softwood lumber prices continue to climb and are up 2.5 percent for the month and 33.1 percent during the past 12 months. Prices for prepared asphalt, tar roofing, and siding increased 2.1 percent in April and are 6 percent higher compared to the same time last year. Prices for concrete products increased 1.1 percent compared to last month and are 3.2 percent higher from one year ago.

“However, beneath the headline numbers is some emerging volatility that should concern contractors,” said Basu. “This volatility is not necessarily associated with rising prices, but rather with expanding monthly fluctuation that may render bidding projects more difficult.

“In the most recent month, materials prices would have actually fallen significantly except for an increase in energy prices,” Basu remarked. “In recent weeks, commodity prices have generally been weaker, a reflection of a soft global economy still prone to bouts of weakness.

“Economic growth in China now appears to be firming and Japanese economic activity is accelerating, which would tend to be consistent with future materials price increases,” added Basu. “In addition to a shifting global outlook is the impact of central bank policy around the world. Many central banks are now following the lead of America’s Federal Reserve by lowering interest rates and increasing money supplies—a policy environment that is more likely to be associated with both volatile and rising materials prices.

“Only time will tell if materials prices generally remain lower,” said Basu. “However, contractors should not be surprised if nonresidential construction materials prices bounce back significantly over the next several months.”