Reports are beginning to come in that construction projects are on sale and that companies hungry for work are cutting prices to try to win the first round of public works projects that are being funded by stimulus dollars.

According to reports, some of the projects are being let 25 percent below the projected or expected bid. While this can be good for us as tax payers and the states, because they can get more done with fewer dollars, let’s hope it doesn’t turn around and bite us.

Hopefully, the low bids are a reflection of an overall drop in prices for materials and supplies, fuel, transportation and labor. Then this is good. More work means more jobs, and more jobs means more money flowing back into the economy. If this is the case then we should see the economy rebounding quicker than expected.

But, this does cause one to consider what the heck is going on since the stock market did a dip rather than a blip – down not up. Why?

A couple of construction stocks that I watch (actually there is a list of 30 companies but not daily) regularly have gone down when they should have gone up. It appears that my old barometer isn’t working the way it did just a few months ago. 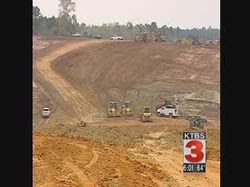 According to the New York Times, Pennsylvania officials said contractors competing for their first round of road and bridge projects had offered bids 15 percent lower than the state had expected. Utah officials said some of their bids were coming in 25 percent lower than expected. And a bid to build a 4.7-mile extension of Interstate 49 (pictured) from Shreveport, LA toward the Arkansas state line came in at $31.1 million, about $4.7 million less than the Louisiana Department of Transportation and Development had estimated the project would cost.

“The bids are coming in lower than we would have imagined,” U.S. Department of Transportation Secretary Ray LaHood said in an interview, adding that the low bids should provide good value to taxpayers. “I think there’s a huge appetite for these projects, and people are raring to go. There’s pent-up demand for people to get these bids and get the work.”

If the low bids keep coming and the price of construction material stays low, the Utah Department of Transportation (UDOT) hopes to get more work done with the stimulus money than expected, said Nile Easton, a spokesman for the agency. “We’re hoping that we can actually stretch that money,” he added.

The low bids do reflect the obvious lack of work in the industry. It is a buyer’s market, but it has been for a while. Contractors are eager to get back to work. Realistically, if a contractor owns equipment and it isn’t working, it is costing. The fixed costs like insurance, storage, depreciation and even maintenance continue even though a machine isn’t running. So, contractors will bid to win, but if the contractor doesn’t make any money on the job …

It sounds great, being able to get more for less, but there is a point when this could be tragic rather than beneficial. Bankrupt contractors won’t do the economy any good.

“I think it’s a good deal for taxpayers, and taxpayers need a good deal right now,” Patrick Cooney, a spokesman for the Oregon Department of Transportation (ODOT), said last week after coming back to work from a furlough day to save the state money.

Some argue that low bids should raise red flags. Barry B. LePatner, a construction lawyer, said that unless states performed independent estimates to find out the true costs of their projects, they risked awarding contracts to companies whose low bids did not reflect the true cost of the work. In such cases, he said, it is common for a company to try to undercut its competition with a low bid and then, once it has won the job, try to eke out a profit by putting in numerous change orders that drive up the price and delay the project.

If this is the case, there is always the prospect of getting the materials at a lower cost or saving some other way.

States are gearing up to begin work now that spring and the construction season are at hand. By last week, 34 states had been given the go-ahead for nearly 1,000 projects worth $3.4 billion, transportation officials said.

Officials in many states see the low bids as a sign that they are in a buyer’s market. A few years ago transportation officials in Utah, concerned that there was little competition for their construction work, put together a team to try to entice more companies to bid for the jobs. Now, as the first stimulus projects get under way, they are getting a half-dozen bids for each job — and many are coming in at 25 percent below their estimates.

“Boy, it’s a great time to be putting projects out,” Mr. Easton said.