The nonresidential building construction sector added 2,100 jobs for the month and 4,900 jobs from the same time last year, with employment standing at 662,700. 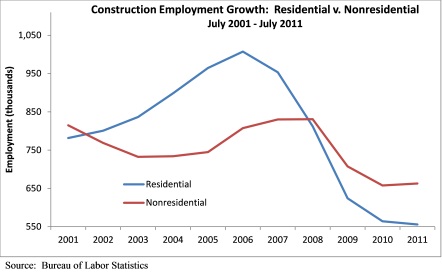 Overall, the nation added 117,000 jobs in July with the private sector adding 154,000 jobs and the public sector losing 37,000 jobs. Year-over-year, the nation has gained 1,258,000 jobs, or 1.0 percent. The national unemployment rate remains virtually unchanged from the previous month and now stands at 9.1 percent.

“Today’s jobs report is certainly viewed as good news,” said Associated Builders and Contractors Chief Economist Anirban Basu. “Many economists – including myself – feared the worst, with some predicting that today’s numbers would indicate that the nation lost jobs in July.

“Instead, the employment numbers easily exceeded expectations and reflected a greater level of economic momentum than has been recently perceived,” Basu said. “More importantly, these gains were reflected in the U.S. construction sector, which also added jobs at a somewhat surprising clip, with the nonresidential building construction subsector adding more jobs in July than during the past four months.

“Unfortunately, the jobs report is backward looking and does not reflect the impact of the recent market downturn and associated loss in confidence,” said Basu. “In other words, the jobs momentum may not continue through August and into September, including in the nation’s construction industry.

“The recent economic slowdown, combined with the chilling effects of the debt ceiling stalemate, Europe’s economic woes, and other factors is likely to have slowed hiring more recently,” Basu said. “The key going forward may be consumer spending since that is now essentially the only part of the economy that can push the economy forward briskly.”