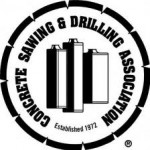 The start of 2012 marks the 40th anniversary of the Concrete Sawing & Drilling Association (CSDA), and the future is likely to be as exciting and event-filled as the past 40 years.

The association was formed in 1972 with just 18 charter members. Today, CSDA has almost 500 member companies from around the world and continues its mission to promote the selection of professional sawing and drilling contractors and their methods. Membership includes contractors, manufacturers, distributors and affiliate companies in the concrete sawing and drilling industry.

“CSDA has made tremendous progress in its first 40 years and is positioned to build on that success for an even brighter future,” says CSDA Executive Director Patrick O’Brien.

The knowledge and experience of its members has enabled CSDA to produce 33 industry Specifications, Standards, Tolerances and Best Practice documents. In addition, the association has created the CSDA Safety Manual, a 208-page comprehensive safety document, and has 100 Toolbox Safety Tips in circulation to increase hazard awareness to its membership and enhance operator safety.

CSDA has also developed an extensive range of training options to equip sawing and drilling operators with the necessary skills to handle any concrete cutting job. The association launched Cutting Edge, an entry-level course for inexperienced operators, in 1993. Close to 800 students have graduated from this class. Several hands-on classes followed for major cutting disciplines, and in 1996 the association introduced the CSDA Operator Certification program for skilled and experienced students. Training has also shifted from the classroom to the home or office. The CSDA Online Training program was launched in 2007. The program boasts 29 online classes, which have been completed by over 1,700 students.

The association continues to align itself with established organizations, while supporting the growth of other associations and industry events. CSDA has been a cosponsor of the annual World of Concrete exposition for 35 years and is currently in its sixth year of an Alliance partnership with the Occupational Safety and Health Administration (OSHA). In addition, the association is part of several other organizations and helped create the International Association of Concrete Sawers and Drillers in 1995.

Other achievements for the association include the development of Concrete Openings—the official magazine of CSDA—from a 4-page photocopied newsletter circulated in 1975, to an 80-page trade publication that reaches 17,000 industry professionals each quarter. CSDA has also seen the election of the first female president in 2005 and the formation of the CSDA Next Generation group in 2010 for future industry leaders.

CSDA will be celebrating 40 years with several events planned for 2012. For more information about CSDA or its 40th Anniversary events, visit www.csda.org, email info@csda.org or call 727-577-5004.