Governor C.L. “Butch” Otter (R) said Thursday that he decided not to reject the federal government’s economic stimulus money, but to accept it “reluctantly and cautiously” to help Idaho residents get through the recession.

Most of Idaho’s legislators never wanted it, but the stimulus money is there. So, now, Division of Financial Management Administrator Wayne Hammon, wants the governor’s recommendations for spending Idaho’s stimulus to be crystal clear.

Gov. Otter discussed what his recommendations are for the $1.24 billion geared for Idaho from the federal Stimulus Package. He mentioned that a little more than $200 million is dedicated to highway infrastructure with another $60 million headed to other infrastructure.

“The quickest way we can get shovels in the dirt, get people using their shovels is giving back to the infrastructure needs that have already been underlined,” Otter said.

Gov. Otter wasn’t able to give an exact number for the amount of jobs his stimulus recommendations would create, but early forecasts stated that 3,000 jobs would be created in transportation alone, if only $120 million was spent on highway and bridge projects. Since Otter proposes to set aside over $200 million, it’s likely even more construction jobs will be created.

Hammon spent over an hour Thursday explaining the plan and answering questions during a meeting of the Joint Finance and Appropriations Committee.

“Our first priority is to create and protect jobs. And that is something that is stated in the very front of the stimulus bill itself, but also when it comes to the governor’s philosophy,” explained Hammon.

When it comes to job creation, 16 percent of the money would go to fund transportation, creating highway, bridge and public transit projects.

One of the eight transportation projects statewide receiving money includes the US 93 Twin Falls Alternate Route. This route heads south to connect with the existing highway 93/30 junction.

Pam Lowe, director of the Idaho Transportation Department (ITD) says, “You’ve got a very, very nice state highway out there dumping into a largely insufficient local road system and we have worked with the local jurisdictions and spent a lot of time, effort and money holding the local road system together.

Lowe says it will help with traffic and remove ongoing maintenance.

In addition to that, many small town drinking water and waste water facilities would see improvements, priorities most committee members seemed to agree with.

“Obviously infrastructure and transportation is very important and so are the clean water, and waste water treatment facilities, and the construction projects that will occur there,” said Sen. Dean Cameron, (R-Rupert).

Rep. John Rusche, (D) House Minority Leader said, “We are pleased he accepted the stimulus money to help Idahoans and not just in transportation, but in other areas.”

“If you don’t have that infrastructure in place then how do you expect to grow the economy,” stated Rep. Darrell Bolz, (R-Caldwell).

Many committee members expect to make some changes to the governor’s plan, but say it’s a good place to start.

“I hope that suggests the urgency of our infrastructure (needs) in Idaho,” Otter said.

While Astec Industries, the Chattanooga, TN-based road-building equipment maker, could profit significantly from the $787 billion federal stimulus, it won’t be as much or as soon as most people think, company officials say.

“The industry is very aware, the infrastructure portion of this stimulus bill is relatively small,” Dr. J. Don Brock, chairman and CEO of Astec said. “Highways and bridges are less than 4 percent, but yet there is a whole lot of press talk about stimulus infrastructure helping it. I think the highway departments are really aware and on point that they better spend this quickly and show that it will stimulate the economy, which I believe it will.” Dr. Brock said Astec, which builds asphalt plants and road construction equipment, likely will benefit from the Stimulus Package, but the company isn’t counting the big dollars yet.

His view is similar to that of other Chattanooga companies that are set to gain business from the American Recovery and Reinvestment Act. Construction equipment manufacturer Komatsu and Aerisyn, the wind turbine tower manufacturer, may benefit from the Stimulus Package, but it’s a wait-and-see proposition, officials said.

Dr. Brock admitted that he already is seeing an increase in the number of orders for asphalt plants, but it likely won’t have the desired financial benefit until later in the year. Astec was recently named one of the top companies to benefit from the stimulus plan by the financial column, The Motley Fool.

“I think you’ll see a benefit in the second quarter, and you’ll see a stronger third and fourth quarter than we normally have on an annual basis,” he said.

Like other manufacturers, Astec’s business has slowed in the past year. The company’s fourth quarter sales were down 13 percent from the same period the year before. In total, Astec Industries has made layoffs at seven of its 14 companies, a workforce reduction of 17 percent.

For Astec and Komatsu, however, the really big money may be coming later from a highway construction bill now making its way through Congress. The stimulus plan earmarks $29 billion for modernizing roads and bridges, but Dr. Brock said the Federal Highway Trust Fund bill expected later this year will be a bigger boost to Astec and the economy.

“There seems to be probably the best opportunity in my lifetime to see a major rebuilding of our highways and our bridges and our infrastructure coming up in this next bill,” he said. “There’s talk of it being as much as 80 percent to 100 percent larger than the past one — in the $450 billion to $550 billion range.”

Rep. James Oberstar (D-MN), chairman of the House Transportation and Infrastructure Committee, met recently with mayors from across the nation and called the Stimulus Package a “dress rehearsal” for a new six-year highway bill that likely will include about $450 billion for roads, bridges and transit projects.

“The stimulus bill is very nice, but if we don’t get the highway bill the money we get on the stimulus will be a one-shot deal that will not keep employment high,” Brock said. “So whatever we do now we will be giving back nex
t year unless we get a pretty good highway bill.”

In 2005, former President George W. Bush signed a $286 billion transportation bill that is set to expire this year.

Many have suggested that Komatsu also may benefit from the road and bridge improvement portion of the stimulus plan, but company officials said they are not sure the company will feel any effects. 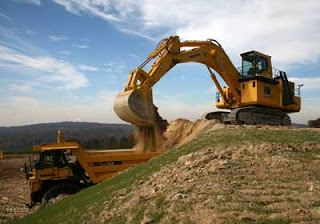 “We are not expecting any short-term benefit, especially here at the local facility,” he said. “We believe there will be some positive benefit, but it is probably 18 months away.”

The stagnant economy forced Komatsu to halt production at the end of 2008, but the company continued to pay its full-time employees while they performed community service in the area.

Company officials said they’d like to see the stimulus plan kick-start their business, but they are aware the road improvement portion of the stimulus plan is focused on improving existing roads, while much of Komatsu’s equipment is designed for new road construction or housing development.

“We’re not expecting an immediate turnaround,” Mr. Riddell said. “What we need is a recovery in the housing market.”

Mike Hohl, president and chief executive for Aerisyn, said the wind turbine tower manufacturer likely won’t benefit directly from the stimulus either, but extending the production tax credit, which gives energy production companies tax credits once they begin producing energy, should give the entire renewable energy sector a boost. President Obama wants to extend the credit to 2012.

“Renewable energy is real high on the president’s agenda,” Mr. Hohl said. “This will be helpful to our industry.”

Randall Swisher, executive director of the American Wind Energy Association (AWEA), said 116,000 jobs and $19 billion in investments are at risk if the federal government hedges on its commitment to wind energy.

According to information provided by the AWEA, the industry suffered steep drops in production during 2000, 2002 and 2004, declines that the AWEA attributes to a tax credit that expired in the preceding years.

“The credits are a critical element of a long-term federal policy to support this vibrant, fast-growing industry,” Mr. Swisher said.

Aerisyn, like the rest of the wind energy industry, had been growing, but Mr. Hohl said the company took a big hit in the fourth quarter of 2008 when customers began to pull back orders by about 50 percent. Aerisyn was forced to cut production and lay off more than 50 employees, he said.

“We’ve already started bringing some of them back,” Mr. Hohl said.

He is hopeful the production credit will give the entire industry a boost, but he knows 2009 still will be a difficult year, he said.

“The biggest obstacle to our industry is banking and credit. Wind power projects still require financing,” Mr. Hohl said. “We still believe renewable energy is the right field to be in. We believe that especially after the change in administration.” 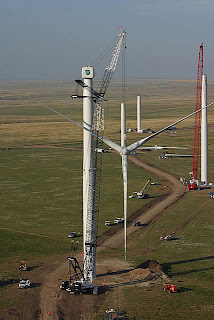 “It can have a huge impact on the future of our company,” Mr. Fischer said.

Mr. Ector said the package includes some provisions that may provide grants for wind power projects. He said the Tennessee Valley Infrastructure Group had a record year in 2008, but the industry came to a “screeching halt” during the credit crunch when financing for wind energy dried up.

“We think and certainly hope it is going to (increase business),” Mr. Ector said of the recovery plan. “We keep hearing it will free up some projects, but we haven’t seen it yet.”