Obama To Lay Out Plans For High-Speed Rail

Thursday, President Obama is expected to share his vision for high-speed rail (HSR) in the United States after unexpectedly adding $8 billion to the economic Stimulus Package for high-speed train travel, a concept that in the past has had mixed political support and little public funding.

“I am always jealous about European trains,” Obama said recently in Strasbourg, France. “And I said to myself, ‘why can’t we have high-speed rail?’ And so, we’re investing in that 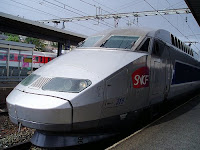 America is miles behind. In Japan, the bullet train can wisk passengers from one city to the next at nearly 200 mph. It’s the same on France’s TGV train, where passengers can get from Paris to Lyon in a little less than two hours. A dozen countries around the world enjoy high-speed rail, and some even enjoy maglev transportation, but America is not one of them.

“The announcement underscores the President’s high regard for high-speed rail and its ability to create jobs and mobility for the United States,” said The Honorable Rod Diridon, Sr., executive director of the Mineta Transportation Institute (MTI).

White House and transportation officials have spent the past several weeks weighing plans for developing at least six high-speed corridors. The ultimamte goal is as many as 11 high-speed corridors on both coasts, the midwest and deep south, using $8 billion dollars of economic stimulus money as a down payment…. and billions more later.

High-speed rail initiatives are in various planning stages in California, Florida, Nevada, the Carolinas, the Midwest and the Northeast. States are already formulating how to use the large appropriation for high-speed rail projects in the American Recovery and Reinvestment Act (ARRA).

California voters recently approved a $9.95 billion bond measure to build a high-speed rail system between Los Angeles and San Francisco. Those funds, coupled with the $8 billion in HSR funds from the ARRA, help to make the California high-speed rail project a reality.

In February, Congress included $8 billion for rail development in the stimulus bill and Obama has included another $5 billion for the efforts in the White House’s proposed budget.

“Some of these plans are 20 years old,” said U.S. Department of Transportation Secretary Ray LaHood.

LaHood said the $8 billion in stimulus money will “jump-start” the process, but rail advocates and transportation officials agree that financing high-speed rail nationally will cost significantly more. “I think you are going to find the development of TRUE high speed rail in certain corridors in the country where you are going to see high-speed rail at over 200 mph.”

The plan to be released on Thursday is required by the stimulus act, but Karen Rae, acting head of the Federal Railroad Administration (FRA), said it will “reference the broader rail agenda that is out there.”

“It will be broad and strategic,” Rae said about the initiative described by officials as President Obama’s top transportation priority. “It’s going to talk about how we begin to create this new vision for high-speed and intercity rail.”

Rae said she hopes her agency beats the next deadline set by the act on June 17 to provide guidance on how the competitive grants in the stimulus bill will be evaluated.

Government financing for passenger rail has been a contentious political issue for years although supporters have long touted its popularity in Europe and Asia. The U.S. government defines high-speed rail as “intercity passenger rail service that is reasonably expected to reach speeds of at least 110 mph.”

“I believe Missouri and the other states in our region present a compelling and united case to the Obama Administration to fund these projects,” Governor Jay Nixon (D-MO) said. “Our states have been working on this rail initiative for more than a decade, and we will aggressively compete for these Recovery Act funds specifically designated for high-speed rail projects.” 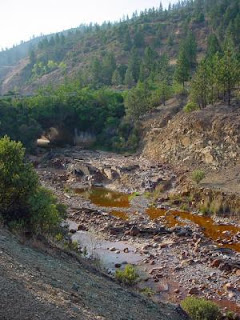 On Monday, the U.S. Environmental Protection Agency (EPA) announced $10 to $25 million in new funding through the American Recovery and Reinvestment Act (ARRA) for the Iron Mountain Mine Superfund site near Redding, CA (pictured is acid mine drainage in Spring Creek downstream from the Richmond Mine, part of the Iron Mountain Mine Superfund Site nine miles northwest of Redding, CA. Microbes inside the mine eat pyrite to produce sulphuric acid, creating the most acidic groundwater ever measured. Spring Creek flows eventually into the Sacramento River – photo by University Of California – Berkeley). The money will accelerate the hazardous waste clean up already underway at the site. It is also expected to jumpstart the local economy by creating jobs in the Redding area. This ARRA funding is part of the $600 million that Congress appropriated to help clean up Superfund sites across the nation.

“EPA has an answer to these challenging economic times,” said EPA administrator Lisa P. Jackson. “Under the Recovery Act, we’re getting harmful pollutants and dangerous chemicals out of these communities and putting jobs and investment back in.”

This funding will cut in half the time needed to dredge, treat and dispose of sediment in the Spring Creek Arm of the Keswick Reservoir. Removing this contaminated sediment could also produce $3 to $6 million of additional peak power by removing constraints on the Central Valley Project so it may free up resources currently needed to prevent contaminated sediment releases.

“In less than a month, the community will see hundreds of additional green jobs and a greatly accelerated cleanup at Iron Mountain Mine due to this infusion of Recovery Act funding,” said Laura Yoshii, EPA acting regional administrator for the Pacific Southwest.

The federal Superfund program to clean up uncontrolled hazardous waste sites that pose unacceptable risks to human health and the environment began in 1980 after 22,000 tons of toxic waste were discovered dumped in the Love Canal neighborhood of Niagara Falls, NY. The image of toxic wastes bubbling up from the ground shocked people across the country, directly spurring Congress to pass the Comprehensive Environmental Response, Compensation and Liability Act of 1980.

The Superfund program is implementing new or expanded cleanup actions at 50 sites around the country and since it began, the program has completed construction of remedies at more than 1,060 of the 1,587 sites on its National Priorities List.

By starting or speeding up cleanup at Superfund sites, Recovery Act funding is also increasing the speed with which these sites are returned to productive use. When a Superfund site is redeveloped, it can offer significant economic benefits to local communities including future job creation.