There are a number of questions that the Stimulus Bill raises or perhaps these issues should be termed problems that it creates. One of them is the “Buy American” clause. Jim Owens, Caterpillar CEO, raised the question, as did Senator John McCain, about how damaging this clause could be if it starts a trade war…and it could. As defined by the bill: “None of the funds appropriated or otherwise made available by this Act may be used for a project for the construction, alteration, maintenance, or repair of a public building or public work unless all of the iron, steel, and manufactured goods used in the project are produced in the United States.”

Where do you draw the line? If the bill excludes products from some countries how can it include products from others? What do we do about currently existing trading partners? Can we afford to isolate or alienate ourselves?

I’m all for keeping as much money working domestically as is possible even if we do manage to irritate some countries. But you really do have to ask if this is the solution to the problem when you consider the fact that the number one selling car in the United States is a Japanese car.

Two other questions that are begging for answers are: How do we pay for rehabilitating our infrastructure? and Does the bailout go far enough?

According to a recent survey of 1,000 Americans commissioned by HNTB Corp., 68 percent said they would pay more taxes to help fund highway and bridge maintenance and new construction. Six years ago, when the current Highway Bill, SAFETEA-LU was up for reauthorization, polls had been run showing basically the same thing, that Americans were willing to pay 10 cents per gallon more in gas taxes to improve the maintenance of roads and bridges. Congress didn’t hear well back then and refused to increase the gas tax or even add indexing.

The Highway Bill is up for reauthorization again this September and getting it passed with increased gas taxes and alternate methods of funding is going to take a concentrated effort by voters convincing their senators and representatives that it is OK to vote for increased user fees for our transportation infrastructure.

The HNTB survey also showed that four in five (81 percent) respondents say making sacrifices to pay for infrastructure improvements now will make the difference between a more prosperous or a more difficult future for the next generation.

The average American would pay $22 a month to cut down on the time they spend in traffic by 20 percent, says the survey.

“These survey results show people understand the value infrastructure projects have in advancing job creation and economic competitiveness,” said Paul Yarossi, president of HNTB Holdings Ltd, in a statement. “By making it easier to deliver goods and services and respond to natural and man-made disasters, America will prosper.”

When asked about infrastructure spending in the economic stimulus package, 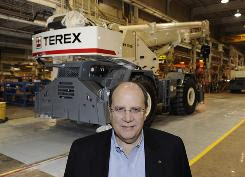 On February 15, 2009, Terex CEO Ron DeFeo, spoke to USA TODAY management reporter Del Jones, about why the infrastructure portion of the $787 billion package is a good start but is only a tiny percentage of what is needed to make the country competitive. Following are excerpts, edited for clarity and space.

Q: The stimulus isn’t enough to create jobs and steer the economy toward recovery?

A: I’m delighted that we have $150 billion for infrastructure. But it’s a reaction, and we need a broader vision for the country’s prosperity. We have spent so much effort on the information superhighway that we have forgotten that what we do on the information highway in large part still has to be moved on the real highway. We tolerate congestion. If you combine technology with the hardware of an economy, the ports, waterways, roads, energy infrastructure, you are going to end up with a stronger economy.

Q: There are two arguments regarding the stimulus package. One, it’s a lifeline for the economy. Two, the debt creates a long-term anchor. What’s your view?

A: I don’t think it’s an anchor, because we have roads, bridges, highways that have been crumbling. But we’ve failed to make the argument that America’s prosperity is dependent on its infrastructure investment, and therein lies the challenge for leadership. We need ideas like when the Erie Canal was put in place, and the railroad connected East and West. We could have commerce corridors that just move freight at high speed, a high-speed rail to move freight between California and North Carolina at 150 miles per hour. We’d (make) the Panama Canal (obsolete), with a commerce corridor between China and Europe that we could charge for. I want people to laugh at ideas because with that they will figure out how to make it work.

Q: More likely, they would choke on the cost. You’re talking trillions of dollars.

A: If $1trillion produces $2 trillion of returns, that’s what will get prosperity working. You think the Panama Canal doesn’t produce a return? Our ports produce returns, but our ports are obsolete. Do you think China is putting in ports to put workers to work? Or do you think they’re investing? We have to stop thinking of this as pork and start thinking of it as business decisions.

Q: That requires long-term planning. Won’t much of the infrastructure spending in the stimulus bill be hurriedly wasted or spent down the road when it will kick in too late and may contribute to inflation?

A: Again, it’s necessary, but the infrastructure spending doesn’t solve the problem. We have been neglecting our infrastructure for 30 to 40 years. The 18-cent gasoline tax was last raised in 1993. Inflation-adjusted, the effective rate is about 11 cents per gallon today, so it’s been cut in half, and the cost of repairing roads and bridges has dramatically gone up. We react when a bridge falls into the water.

Q: We have so many needs, like health care.

Q: Any time the government spends a lot of money on anything, including Medicare, corruption and fraud are close behind. There are billions of dollars missing in Iraq. Won’t a lot of dishonest people get rich?

A: I’m with you. That’s why I would put it in the hands of public/private partnerships with boards of directors, approved projects, rates of returns that are audited. There is always fraud, but I think there is a way of managing it. I accept waiting at LaGuardia Airport 45 minutes on the runway. Everybody accepts it, but there is a huge cost. We tend to accept delays and congestion, but we can control congestion.

Q: What kinds of jobs are created by infrastructure spending? Will they be largely blue collar?

A: It’s not just the construction worker digging a hole. That is the tip of the sword. It begins with ideas, and jobs are created in banking, in architecture, at all the suppliers. The conventional wisdom is that for every $1 billion in infrastructure spending, 28,000 jobs are created. More than that, infrastructure unlocks the opportunity to access markets. A new road goes in, and a lot of services crop up. It’s axiomatic. When you invest in infrastructure, people and jobs follow.

Q: Remember the Big Dig in Boston, the poster child of infrastructure projects? How do we keep from starting projects that balloon in cost? How do we prevent bridges to nowhere?

A: That’s the fear of the American people, that we will do projects for the pride and legacy and not for the economic success. A bridge to nowhere is a bad bridge, and they’re all over the place. We must look at the projects and ask, what is the economic return and what is the environmental impact? We’ve got to be disciplined. Sometimes, you can never imagine the possibilities of something until you begin to unlock them. That spirit is lost in this country. It’s not there. I don’t want people to think: “We’ve got infrastructure done. Let’s cross it off our list.”

Q: With all this infrastructure spending coming down the pike, why has the stock of Terex fallen?

A: Infrastructure spending is good news long-term. But the stimulus bill has been built in for a long time, and the current economic conditions are outweighing it. Globally, we’ve cut 5,000 of 21,000 jobs. Some more cuts are coming.

Q: What should other companies unrelated to infrastructure projects be doing to position themselves in the next six to 12 months?

A: Manage your business for cash. The predictability of future earnings is hard; survivability is the key. Eliminate waste. Waste comes disguised as productive work.

GOMACO’s GT-3600 high-production curb and gutter machine now features a control system for the world’s languages. The GT-3600 with the optional G22,was on display for the first time at World of Concrete 2009.

The G22’s new graphical display provides the operator with an easy to understand interface to the machine’s controls. Newly designed icons and screens with pictograms reduce the operator’s learning curve to a minimum. The brightly colored graphics and full text explanations provide the ultimate user-friendly operator experience. The G22 has a dual-language feature with the ability to operate in English or a second language. It also offers the choice of metric or imperial measurements. The GOMACO control systems team has developed the G22 screens for the major languages of the world. Advanced system diagnostics on the G22 automatically pinpoint and identify electrical circuit opens, shorts and fault codes to aid in troubleshooting. Faults are identified and a full explanation of recommended actions are given. That means less downtime and a quicker uptime on service because the G22 actually helps eliminate costly service time searching for system problems. 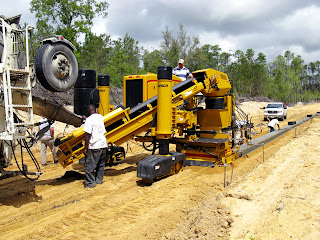 Leg diameter on the new generation GT-3600 was increased by 15 percent and features the same quality and durability as the GOMACO Commander III legs. The new trimmerhead is directly driven with a radial piston hydraulic motor in a closed loop hydraulic system. The motor provides an increase in torque for more power and a faster tooth-tip rotational speed, which moves the material out of the trimmerhead at a higher rate. The new lightweight, molded fiberglass shroud allows easy removal or access to the engine components.

The control system also has a selective steering dial for five different modes of controlling the three tracks. This provides a choice for negotiating job-site conditions and loading for transport. The crab steering selection gives a quick approach and coordination to the stringline. The GT-3600 can easily reverse steer on-line to within 1/8 inch tolerance for a quick start. High-production performance through radii is accomplished with the control system’s tight radius software and the ability to toggle steering control from the lead sensor, eliminating continued manual sensor adjustments. Every circuit on the GT-3600 is electronic-over-hydraulic for easy, accurate adjustments and an instant, controlled response. Smart hydraulic steering cylinders, interfaced with the G22, allow push-button steering setup. The programmable cylinders also allo
w steering parameters of the tracks to be set with the touch of a button. Optional auto-transition and slope compensation software is available to automatically transition in and out of “catch” or “spill” gutter. It automatically compensates for mold position in relationship to the stringline as a result of slope change.