Guest Blog from the TROWELMASTER

After more than three months of touring, nearly 15,000 miles on the road, dozens of dealer events and contractor job site visits, it all came down to a heated Trowel Challenge finals competition on Thursday afternoon. Shortly after 3 p.m. Vegas time, hundreds of spectators gathered around the slab in Wacker Neuson’s outdoor Silver Lot booth #O30239 to cheer on the top 10 finalists 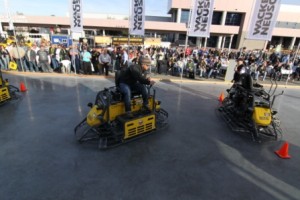 Prior to Thursday’s final three qualifying rounds, only the top two qualifiers – John Dekryger and Nick “The Kid” Scripture – registered times below 35 seconds. During the 10:30 a.m. round of qualifying, Power Concrete Finishing’s Grant Ostridge set the top mark with a blazing course time of 33:27 seconds. The number of lightning-fast times throughout Thursday’s qualifying sessions eclipsed those from previous rounds, as contractors in and close to the top aggressively competed for the top 10 final positions.

Names like Dorn, Smith and Knockwood fell off the leader board throughout the day on Thursday as Ricky Ruiz, Lee Hadenfeldt and Josh Hadenfeldt all posted times below 35 seconds. After the final 1:30 p.m. qualifying round, 9 out of the 10 qualifiers ran sub 35-second times. Only one final qualifying time did not crack the 35-second threshold, Rick Scripture, who entered the finals at 35 seconds flat.

But that didn’t phase Rick in the least. He kicked off the finals competition with a personal-best time of 33:49 seconds through the course, setting the stage for an electrified competition. Five of the 10 competitors posted sub 34-second times in the finals. Slater & Son’s Ricky Ruiz ran a finals-best 33:48-second time, while H & H Concrete’s Lee Hadenfeldt crossed the finish line at 33:66 seconds. 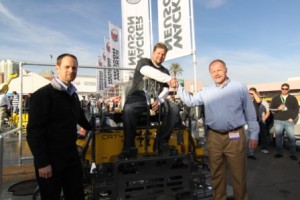 After nine of the final timed trowel rides, it all came down to Grant Ostridge, who held the best qualifying time at 33:27 seconds. He needed to run a 34:88 or better to capture the title. However, a couple of costly penalties added precious seconds to his time, resulting in a 39:10 finish in the finals.

We thank all who visited the Wacker Neuson outdoor exhibit at World of Concrete. We congratulate the hundreds of contractors who stepped up to take the Trowel Challenge. While only one could take home the customized trowel grand prize, you are all winners in our eyes.
Don’t forget, the next Trowel Challenge is less than a year away! What will Wacker Neuson do next?