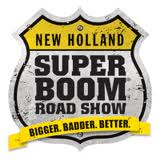 Franklin Equipment is hosting the New Holland Super Boom® Road Show Competition at its Columbus, OH branch on May 13. This event is one of several held at New Holland dealerships throughout the U.S. during the year at which heavy equipment operators compete for a chance to win a 2011 New Holland skid steer loader at the North American New Holland Super Boom® Road Show Championship Event later this fall. The winner from each local show will be awarded a trip for two to the national event, to be held at the 2011 Green Industry and Equipment Expo in Louisville, KY in October 2011. Each local winner will also receive $500 cash and a commemorative New Holland Road Show belt buckle. The new 200 Series skid steers and compact track loaders will be on display, and show specials will be available, along with equipment demonstrations.

“The competition is a terrific opportunity for operators in the area to show off their skills, represent us in the national show, and win some cash,” says Tony Repeta, general manager and managing partner of Franklin Equipment. “We are looking forward to hosting the show and hope to see a big crowd that includes customers, neighbors, and anyone interested in heavy equipment.”

Both second and third place winners at each rodeo will receive a commemorative New Holland Road Show belt buckle and a certificate recognizing their achievement. Second place is also awarded a cash prize of $250 and third place, $100. All participants walk away with a New Holland Super Boom® Road Show hat and t-shirt. Entrants may compete individually or in teams of two and can only compete in one Road Show event at one dealership location during the year.

Franklin Equipment has been selling, servicing and renting heavy machinery since 2008. The Columbus branch is located at 915 Harmon Ave.