Skip to content
We may be one nation, but our geography has created regional differences that are becoming very noticeable as the money from the stimulus plan starts to generate work in different areas. The approach on applying funds to projects is varying from state to state. Each state evaluating their needs, uses the funds in such a way that it achieves the intended goal of the bill, create jobs and stimulate the economy.

In our sidebar, we’ve added a state-by-state listing of how states propose to spend the stimulus dollars they ultimately get. Not all of these figures have been agreed upon; some are still subject to negotiations. The listing of proposed projects is very comprehensive. I am sure President Obama is not pleased that over half the states still do not have reporting websites linked to Recovery.gov so that citizens can see where all their tax dollars are going in his effort to bring transparency and accountability to government. As more states become available, we will add them to the list. The following is a sampling of what is going on across the country.

Kansas will widen U.S. 69 to remove a bottleneck outside Kansas City, along with a few other expensive projects. Maryland will spend its money in smaller pieces, resurfacing dozens of rutted roads and highways. Colorado will build an interchange on Elk Creek Road in Jefferson County, complete with an underpass for the elk. 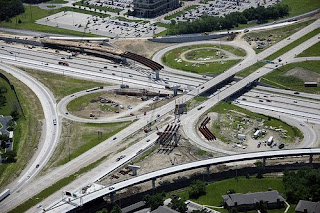 There is nothing monumental in President Obama’s plan to revive the economy with a coast-to-coast building spree, no historic New Deal public works. The goal of the American Recovery and Reinvestment Act is to put people to work quickly, and so states across the country have begun to spend nearly $50 billion on thousands of smaller transportation projects that could employ up to 400,000 people, by the the President’s estimates.

More than a dozen states have now said how they plan to spend at least some of their transportation money, giving the clearest picture yet of how one of the President’s signature programs is playing out around the country. Beyond all the money for Medicaid and unemployment benefits in the huge bill passed last month, this will be the face of the country’s stimulus program: a bridge will be painted on a rural road, a new lane added on a suburban highway, a guardrail installed on a median strip and a stretch of rough road resurfaced.

They may be old plans that the recession had forced a state to shelve, but multiplied by thousands, they will quickly get bulldozers rolling again and paychecks flowing. On the highway projects alone, the White House said last Tuesday that 150,000 jobs would be created or saved.

Some states are taking radically different approaches with their transportation money. While Kansas is using it on a few big marquee projects to expand capacity on several highways, Maryland has adopted a fix-it-first policy, and plans to use its money to repair dozens of roads and bridges instead of building new ones.

The work, however mundane much of it is, cannot come too soon for a construction industry buffeted by an unemployment rate that has risen to twice the national average as many states cut back on building. Mike Gibson, the executive director of Associated Contractors of New Mexico (ACONM), a trade group, said his state had lost 4,500 highway construction jobs in the last year.

“We have lost the equivalent of a plant closure,” Mr. Gibson said. “When you lose 10 jobs here, 100 jobs there, it adds up very quickly.”

States have tremendous latitude in how they spend the money, and in some places that is leading to pitched political battles — battles that must be waged quickly, since the states must begin spending the money in 120 days. Regional politics is playing a role in some states, as local lawmakers fight to get money sent to their districts.

Since the stimulus law provided much less money for transportation than many states had expected — less than $50 billion, which is about what the federal government spends on transportation every year — the competition for those dollars can be fierce.

A fight in Washington State is emblematic of the questions facing state lawmakers across the country: Who decides how the money is spent? Is it better spent on a few big projects or many smaller ones? Should the bulk of the money go to metropolitan regions where the majority of the population and economic activity are, or should it be spread out evenly to suburban and rural areas across the state?

Seattle, in one of the most ambitious building projects in the nation, plans to tear down the aging, unsafe elevated highway that blocks off its waterfront and replace it with a tunnel. Seattle’s mayor, Greg Nickels, and Washington’s governor, Christine Gregoire, both Democrats, wanted to jumpstart the project with around $75 million in stimulus money to help the city replace two major roads.

The state’s Democratic-controlled Legislature had other ideas. It drew up a list of how it wanted to spend the $341 million in transportation money — and none of it went to Seattle. Lawmakers said they had decided to spend the money on roads that the state controlled and on projects that they had 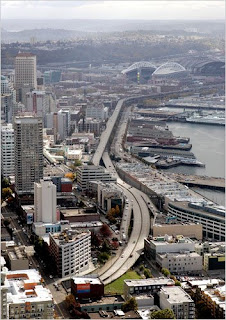 been forced to put off because of fiscal constraints.

“There’s not a single project in Seattle (photo on right by Elaine Thompson/AP) on the entire list,” Mr. Nickels said in an interview, arguing that the Seattle road projects would continue to stimulate development and create jobs long after the last asphalt was spread. “The fact is that the 100 largest metropolitan areas in this country generate 75 percent of the gross national product, so if you’re going to create jobs, that’s where you’re going to do it.”

But lawmakers argued that the money should be spread out to other regions in the state. State Senator Mary Margaret Haugen (D-Camano Island), and chairwoman of the transportation committee, said the state had fallen behind on its planned construction projects as the economy worsened, and she saw this as an opportunity to begin catching up.

“I think everybody thought there was going to be more money,” Sen. Haugen said. “Had it been double, we might have made our decisions differently.”

In Texas, a proposal to use $181 million of the federal money to help build a toll road that will eventually form part of an outer ring around Houston has drawn criticism from some transportation advocates who warn that the project will spur more sprawl.

Two schools of thought are emerging as states decide what to do with their shares.

Kansas decided to concentrate its money on a few new projects that its transportation secretary, Deb Miller, called “game changers.”
So it will spend nearly a quarter of its money building the next leg of a project to expand U.S. 69 in Overland Park, a bustling suburb of Kansas City. It will rebuild an interchange in Wichita in an area where developers want to put more retail space, rebuild a rural highway in Grove County that has heavy truck traffic, and complete a 10-year project to improve a corridor in McPherson County where work was stopped because the money had dried up.

“We wanted to build projects that would have a lasting impact, so that 20 years later people could look at them and see what we did,” said Ms. Miller, who added that the department was considering making plaques to show that the projects had been paid for by the American Recovery and Reinvestment Act of 2009.

Others argue that the money should be used to fix the crumbling infrastructure that already exists. They note that for years, many states have put off much-needed maintenance to save money, and that repair projects can be done quickly. In the absence of a broader policy discussion about the future of transportation — which would involve wrestling with questions about sprawl and how to reduce dependence on foreign oil — these states have decided it is better to fix existing roads than to build new ones that would only attract more cars.

Maryland is taking the fix-it-first approach — and calls the $638 million it will receive in stimulus money most welcome, given that the state was forced to defer $2.1 billion worth of construction and repair projects when the economy soured. John D. Porcari, Maryland’s transportation secretary, said the state would quickly put some 10,000 people to work resurfacing dozens of roads, painting and repairing bridges and putting in guardrails.

“It’s like maintaining your car; if you neglect the relatively easy periodic maintenance, you’re building up to a very big bill — and eventually replacing it,” Mr. Porcari said. “Instead of having one or two or three mega-projects, we have literally dozens and dozens of projects in every corner of the state, which maximizes the ability of local firms to compete for them.”

Now contractors across the country — many of which have had to shed workers as construction slowed to a halt — are gearing up for more work. Jim Andoga, the president of Austin Bridge & Road, which does heavy highway work in Texas, said his firm had mothballed one of the asphalt plants it owned and let go about 50 workers. Other companies have had to lay off up to half of their workforce, Mr. Andoga said.

Mr. Andoga predicted that with so many companies desperate for work, the government would get some bargains on early bids.

“I’ll tell you,” he said, “the first round of the stimulus, I think the work’s going to go pretty cheap.”

There may be bargains, but if we can put people back to work and start growing the economy, it can be viewed as an investmentand not a fire sale.