In a full committee mark-up session, the House Committee on Transportation and Infrastructure approved on March 5 a key bill authorizing $18.7 billion in new investment to the nation’s clean water infrastructure.

The committee approved H.R. 1262, the Water Quality Investment Act of 2009. This bill is similar to legislation that passed the House in the 110th Congress, H.R. 720. It was introduced on January 30, 2007, reported by committee on February 7, 2007 and passed the house on March 9, 2007. It never became law. Sessions of Congress last two years, and at the end of each session all proposed bills and resolutions that haven’t passed are cleared from the books. Members often reintroduce bills that don’t come up for debate under a new number in the next session.

The committee also approved its budget Views and Estimates for Fiscal Year 2010. The Committee provides views and estimates on budgetary issues for programs under its jurisdiction to the House Committee on the Budget each year to help guide the development of the year’s budget resolution.

Committee Chair James L. Oberstar (D-MN), said, “The bills we approved take us another step toward creating jobs and strengthening the economy through federal investment in public infrastructure.”

The Views and Estimates statement lays out the committee’s position on the budget proposed recently by the Obama Administration. It calls for the committee’s priorities to be fully funded. These include selected provisions of the Clean Water Act and the Comprehensive Environmental Response, Compensation, and Liability Act (CERCLA); reauthorization of the U.S. Coast Guard and the Federal Emergency Management Agency; and consideration of a water resources development act.

The Water Quality Investment Act of 2009 (H.R. 1262), was approved by the House March 12. It renews the federal government’s commitment to clean water by authorizing $19.8 billion over the next five years for wastewater infrastructure and other efforts to improve water quality.

The legislation, originally written to authorize a $1.8 billion grant program, was amended to authorize an increased $2.5 billion for municipalities and states to invest in the modernization of aging sewer infrastructure affected by wet weather events. Under the legislation, states will also be required to set aside twenty percent of the funding for projects that utilize “green” technology.

As approved in the House, the Water Quality Investment Act would authorize a $2.5 billion dollar grant program over five years to control combined sewer overflows (CSO’s) and sanitary sewer overflows (SSO’s). Under the grant program, funding would be allocated directly to municipalities during the first year. The following four years of funding would be allocated to states on a need-based formula.

The centerpiece of The Water Quality Investment Act is the authorization of $13.8 billion in federal grants over five years to capitalize the Clean Water State Revolving Fund, the principal source of federal funding for meeting the nation’s wastewater infrastructure needs, and provide low-interest loans to communities for wastewater infrastructure.

States would use such grants along with their own funds to make low-interest loans to communities and grants to Indian tribes to construct wastewater treatment facilities and related projects.

It amends the Clean Water Act to provide a national standard for public notification of overflows, and increases the authorization of appropriations to $150 million for each of the fiscal years 2010 through 2014.

“Despite the obvious need for clean, potable water, federal funding for Clean Water SRF’s has been dramatically cut in recent years, but that is about to change,” said Oberstar.

“Investing in our wastewater infrastructure is a critical priority, both for Congress and the Obama Administration, that will have a significant beneficial impact on the quality of the nation’s waters and environment, as well as the protection of public health,” he said.

“This legislation needs to be enacted quickly not only to address the nation’s staggering water infrastructure needs, but also to provide economic relief to thousands of unemployed or underemployed workers, said Oberstar. “H.R. 1262 calls for the use of products and materials that have been manufactured in America, and it could create and sustain 680,000 jobs over the next five years.”

“This bill will help make it safer to swim in our nation’s lakes, streams and rivers,” said Nancy Stoner, co-director of the Water Program at the nonprofit Natural Resources Defense Council.

“Congress has taken a step to protect public health and improve quality of life, and, if properly funded, this bill could create hundreds of thousands of jobs that can’t be shipped overseas,” Stoner said. “By including green infrastructure solutions in the bill, the House is making it clear that we can no longer afford to waste water – our most precious resource – o
r threaten our communities and waterways with polluted storm water.”

“Over the past several decades, we have made significant progress in the improving the quality of our water. Unfortunately, much of this progress is now at risk,” said Rep. Eddie Bernice Johnson (D-TX), who chairs the Subcommittee on Water Resources and Environment.

“Today, approximately 40 percent of rivers, lakes, and coastal waters do not meet state water quality standards, and the problem is getting worse. Based on Environmental Protection Agency estimates, without significant additional investment in our nation’s system of wastewater infrastructure, discharges into U.S. waters could reach levels not seen since 1968 – four years before the enactment of the 1972 Clean Water Act.” 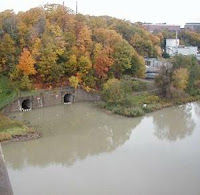 “Without significant investment now,” said Johnson, “this could have dire consequences for human health, aquatic ecosystems, and our overall quality of life.”

Finally, the bill ensures that there is a preference for American steel, iron, and manufactured goods in the construction and repair of wastewater treatment systems with a “Buy America” provision.

The Senate is expected to begin consideration of its version of the bill in the next few weeks.

Senator Frank Lautenberg (D-NJ), the Senate sponsor of the legislation, stated, “We need to make a serious commitment to restoring our sewer systems, which are a critical part of the nation’s infrastructure. This investment is needed to ensure our waters are safe for drinking, swimming, fishing and other uses.”

Prior attempts to pass this legislation as H.R. 720 have not been successful. Odds of it going through the current senate are more favorable than they have been in the past.