Post the non-taper move in September; our outlook is for no Fed action for the rest of this year, as economic growth remains sub-par and inflation well below the Fed’s 2 percent target.

Is the Unemployment Rate Relevant? Inflation?

From March to May 2013, the unemployment rate was unchanged at 7.6 percent while the Fed ramped up its rhetoric on tapering during the May and 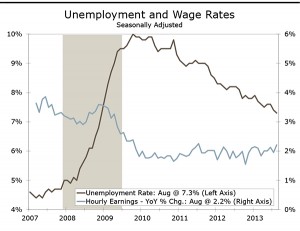 June period. From June to August, the unemployment rate fell to 7.3 percent from 7.6 percent and yet, the Fed decided not to taper in its QE3 asset purchases. Meanwhile, the inflation outlook did not change as inflation indicators remained well below the 2 percent target.

In reality, the non-taper was in line with the pace of growth in the economy and the below-target rate of inflation. However, this decision was out of line with the rhetoric of both hawks and doves, members of both the Fed Board and a number of regional presidents. Forward guidance became counterproductive. This policy decision suggests that the funds rate will remain low for some time in the future and that the yield curve will steepen over the next few years. 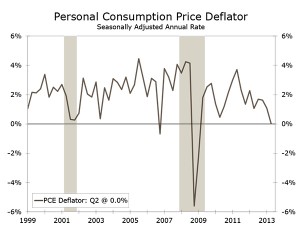 The fed funds rate is an administered interest rate and not subject to market pressures given the excess supply of reserves relative to demand. In this way, the decision to raise the funds rate is independent of the decision to taper. However, intermediate and long-term interest rates will rise with any expectation of tapering because the tapering alters the supply/demand balance in the Treasury market and, not surprisingly, interest rates will rise with the withdrawal of Fed demand—especially given that the Fed is the majority buyer of Treasury debt today. Moreover, as indicated in the Fed’s release, the expectation from the Fed is that the year-end funds rate will be 0.5 percent-1.0 percent at year-end 2015 and 1.5 percent-2.0 percent at year- 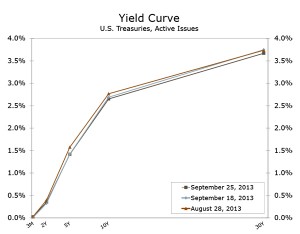 end 2016. These increases must be discounted by investors along the yield curve and, therefore, interest rates will rise.

Given these parameters, we expect the yield curve to continue to steepen modestly. For savers, the bad news is that financial repression continues as the current inflation rate of 1.5 percent on the CPI exceeds the return on Treasury notes out to five years, thereby producing a negative return after inflation and before taxes. This will provide an incentive for some savers to seek alternative investments.

For bond investors, the willingness of the Fed to purchase Treasury and mortgage-backed security assets in the short-term is a comfort, but the expectation that inflation remains below 2.0 percent out to 2016 strikes us as a bad bet. Policy appears geared much more to growth in the short-run, while accepting the risk that, over time, inflation may rise faster; however, this is not the Fed’s. A steeper yield curve appears in the offing with our bias that market rates may rise faster than currently discounted.