On June 26, 2006, Texas Governor Rick Perry cut the ribbon and formally opened the I-10 Katy Freeway Expansion. He thanked and recognized the elected officials who played a critical role in securing the funding for such a massive project. He also recognized the sensitive aspects of road construction in a major city where even the smallest road construction project can ignite the short anger fuse on tempers that can, and often do, explode into violent road rage.

He said, “I have to say, I have never heard more positive feedback about a road construction project than what I have heard from people in West Houston and Harris County concerning the Katy Freeway expansion. That’s because people can see progress by the day, and only three years into this project, nearly ten miles of expanded freeway is now open to the public. This is a tremendous accomplishment that is a credit to an innovative approach that involves a mixture of federal, state and toll revenue dollars to accelerate construction and completion of this much needed widening. 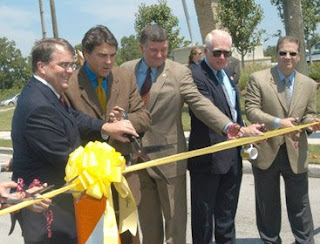 “From the Fort Bend County line to just west of State Highway 6, capacity on I-10 is now greatly expanded, making it a safer highway and a friendlier commute during rush hour. When the entire project is done in a couple years, it will not only cut down on congestion and accidents, it will help reduce pollution from idling vehicles, expand the local economy and provide a more efficient corridor for hurricane evacuations.

“In the past, this type of project would have taken more than a decade, not less than six years. But we are doing things differently. By leveraging toll revenues in addition to gas tax dollars, we have infused this project with funding up front rather than building it one piece at a time as state and federal revenues become available.

“And as the maintenance demands of the existing highway system in Texas utilize almost all state gas tax dollars, it is clear we have to look to other sources of funding to keep up with growth so we can expand highways and build needed new ones.” The Governor concluded his remarks saying, “Texas is serious about building additional highway capacity, and the Katy Freeway expansion is exhibit A in that quest. This massive construction and jobs project is about restoring sanity, opportunity and a better quality of life to those who depend on this highway to move their products and families safely.”

Two-and-a-half years later the project is given the recognition it deserves by being selected as one of IRWA’s Top Ten Infrastructure Projects of the past 75 years. When you consider the construction projects that have been completed over this time period it is indeed an honor to be included in this prestigious top ten list.

The I-10 Katy Freeway Expansion was a 40-mile section of I-10 from downtown Houston to the Brazos River. It was originally constructed in the 1960’s with a design capacity of 79,200 vehicles per day with a pavement design life of 20 years. From an economic standpoint it was a brutal having maintenance cost $49,375 per mile.

The Katy Freeway reality was that it carried 207,800 vehicles per day creating 11 hours daily congestion with the result that motorists were subjected to the “joys” of traveling on a 30 to 40 year old pavement. Annual maintenance costs of $197,500/mile were four times normal highway maintenance costs.

After years of negotiating and some serious lobbying, TxDOT ended up with a 23 -mile section from I-610 to Fort Bend County line; 8 main lanes, 2 managed lanes, 6 feeder lanes.

Construction was scheduled to run six years, from 2003 – 2009. The project was going to be let in 10 Sections beginning at east and west ends working to center. The first construction contract was awarded June 11, 2003. 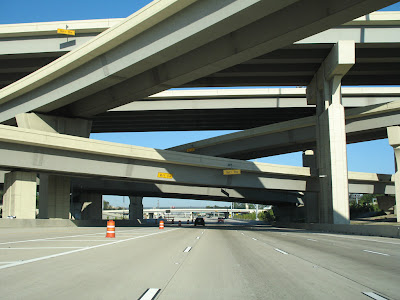 The IRWA Award it received has distinguished the overall project. In addition four different sections have been recognized with Texas Top Highway Projects:

The project encompassesthe reconstruction of approximately 2.65 miles of I-10 from east of Campbell Road to east of Beltway 8 in Houston. Work on the eight to 10-lane divided freeway facility includes the addition of two general purpose lanes and auxiliary lanes; construction of four toll lanes; 14 entrance/exit ramps; 12 bridges; and four grade-separated intersections.

Approximately 2.46 mi. of I-10 from east of Silber Road to east of Campbell Road in Houston will see the reconstruction of 12 entrance/exit ramps, 13 bridges and four grade-separated intersections. The project is adjacent to and directly west of the segment of I-10 listed above, and also includes the addition of two general purpose lanes and auxiliary lanes and the construction of four toll lanes.

If you have ever had the opportunity to travel this stretch of road both before and after (not during) you can easily understand why it was given an award. Simply put, it deserves the recognition.

Tomorrow the countdown will takes us to number 8, the Austin Clean Water Program.