The Confederation Bridge joins the eastern Canadian provinces of Prince Edward Island and New Brunswick, making travel throughout the Maritimes easy and convenient. The curved, 8-mile long bridge is the longest in the world crossing ice-covered water, and a decade after its construction, it endures as one of Canada’s top engineering achievements of the 20th century. It has also been recognized as one of the Top Ten Infrastructures of North America by IRWA. 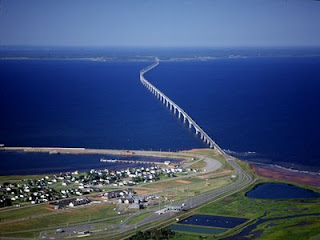 The decision to replace the existing ferry service with a fixed link followed a heated debate throughout the 1980’s. Farmers, fishermen, tourism operators and residents of Prince Edward Island had sharply contrasting opinions about how year-round access to the mainland would affect their way of life and livelihood. Eventually, it was decided that the debate would be settled at the polls. In 1987, the Government of Canada issued a proposal call challenging the private sector to devise an environmentally, technically and financially sound alternative to the ferry system that existed at the time between Prince Edward Island and New Brunswick. The federal Department of Public Works and Government Services selected its favorite bridge design out of several proposals from the private sector, and on January 18, 1988, Premier Joseph Ghiz asked Prince Edward Islanders to make the final decision in a plebiscite. At the polls, 59.4 percent of Islanders voted “Yes” to a fixed link.

After an extensive process, Strait Crossing Development Inc., was named as the developer charged with designing, building, financing and operating the Confederation Bridge.

After four years of construction, using crews of more than five thousand local workers, the Confederation Bridge opened to traffic in May 1997, at a total construction cost of one billion dollars.

Design
At 8 miles, the Confederation Bridge is the world’s longest bridge over ice-covered water. It has won dozens of international engineering awards since its construction, and was designed to last for a century.

Because of its phenomenal length, the cantilevered bridge uses a multi-span concrete box girder structure. The design was produced by a consortium headed by a joint venture of J. Mueller International and Stantec (formerly known as SLG Consulting).

Engineers designed the bridge with graceful curves to ensure drivers remain attentive, and to reduce the potential for accidents that experts believe happen more often on straight highways or bridges. The highest curve at the navigation span reaches 196.85 feet above water, allowing large sea vessels, including some cruise ships, to navigate under the bridge between its piers, which stand 820.21 feet apart.

Construction
The majority of the construction took place ashore at staging facilities in Bayfield, New Brunswick and Borden-Carleton, Prince Edward Island. The components were then assembled in place over the 114.83-feet-deep water. The Confederation Bridge consists of three parts: the 0.8078 mile-long West Approach Bridge leaving Jourimain Island, over 14 piers; the 0.3728-mile-long East Approach Bridge leaving Borden-Carleton, over seven piers; and the 6.835-mile-long Main Bridge which joins the approach bridges, resting on 44 piers. 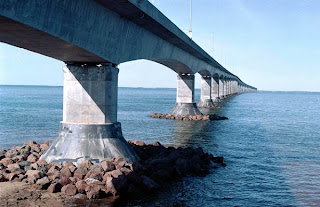 Construction began on October 7, 1993. Crews at the staging facility in New Brunswick created the approach bridges using pre-cast concrete in steel forms, while the main bridge components – including pier bases, shafts, main girders, and drop-in girders – were produced on the opposite side of the Northumberland Strait, at the staging facility in PEI.

Once the pre-cast components were complete in July 1995, the forms were transported by water to the bridge site, and assembled in place by a twin launching truss with a one-of-a-kind traveling gantry crane called the Svanen.

One of the most important structural elements of the bridge is hidden: a construction technique called post-tensioning was used to tie the pier bases, shafts, and girder together into one solid, continuous structure that is designed to last 100 years.

Construction crews reached an important milestone in August 1996, when the P22, or navigation span, was set in place by the crane, marking the halfway point of the bridge. On November 19, 1996, shortly before midnight, the last component of the Confederation Bridge was placed.

Operations And Maintenance
The Confederation Bridge is 36.09 feet wide, and has a 12.3-foot-wide lane for traffic in each direction, with a shoulder on each side. It features a hollow corridor through which a series of cables run, carrying utility services from the mainland to Prince Edward Island.

The bridge was designed with several safety features, including strictly enforced speed limits, a road surface made of long-lasting bituminous mixture that minimizes vehicle spray during wet weather, and more than 7,000 drain ports that allow rainwater and slush to run off the bridge. Twenty-two closed-circuit television cameras and a crew of dedicated personnel provide full surveillance of the bridge 24 hours a day, and traffic signals, emergency alarms and call boxes are supported by an uninterruptible power supply.

The bridge also hosts a weather monitoring station, providing real-time information on wind speed, wind direction, air and road temperature, humidity, dew point, and the rate of precipitation. Bridge control staff use this information around the clock to issue electronic travel advisories, warning drivers of dangerous conditions. Travelers can also log onto a real-time Bridge Cam to view conditions throughout the day and night. 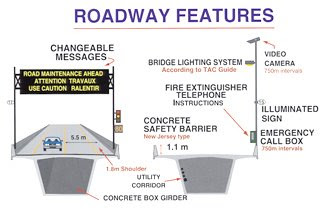 Faster
The Confederation Bridge joins the provinces of Prince Edward Island and New Brunswick, and forms a scenic part of the Trans-Canada Highway. The crossing takes just 10 minutes and there are no wait times, making travel between the Island and mainland fast and simple.

Cheaper
The Confederation Bridge is the most economical way to reach Prince Edward Island, and unlike other transportation options, the bridge is open year-round, 24 hours a day. Tolls are collected upon leaving the Island.

Greener
The Confederation Bridge is the greener connection to festivals and events on Prince Edward Island. Since there are no long line-ups at the toll plaza, cars and trucks do not idle while waiting to cross.

Studies show that collectively, vehicles using the Confederation Bridge consume one-tenth of the fuel a ferry would use, preventing the release of 50,000 tons of carbon dioxide and greenhouse gases every year.

The bridge itself was designed and constructed with the sensitive maritime environment in mind. During the bridge development phase, Strait Crossing worked with marine scientists to identify non-productive fishery areas of the Northumberland Strait. By strategically dumping dredged material in those marine areas as part of a Lobster Habitat Enhancement Program, Strait Crossing helped establish new lobster terrain while enhancing the existing environment for other crustaceans, rock crabs and marine plants.

In cooperation with the Canadian Wildlife Service of Environment Canada, Strait Crossing also constructed nesting platforms for endangered osprey in the Cape Jourimain National Wildlife Area. It is the area’s most extensive osprey management program to date.

Its subsidiary company, Strait Crossing Bridge Limited (SCBL) privately manages, maintains and operates the bridge until 2032, after which time such operations will be transferred to the Government of Canada.

This project has definitely solved problems and improved the quality of life for many Canadians. It has also made a contribution to improving the environment and deserves its number six ranking in IRWA’s Top Ten Infrastructure Projects. Tomorrow, we look at the Second Tacoma Narrows Bridge.
Greg Sitek