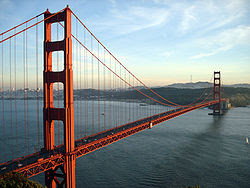 Spectacular is only one of a dozen adjectives you can use to describe the bridge that is the symbol of San Francisco. It’s easy to understand how this masterpiece of engineering, design and construction was selected for IRWA’s Top Ten Infrastructure Projects list.

The first time I saw it was from the window of an airplane that was delivering me to San Francisco so I could get shipped off to Korea for an overseas tour. Since I was on a prop-job airplane – commercial jets were available only on a limited number of routes at the time – the fly-by was slow enough for us to enjoy the scene. Even under the grim circumstances of getting sent overseas, I was awestruck by the majestic crown-like elegance of the bridge spanning the Golden Gate to San Francisco Bay.

As many times as I’ve seen it since then, I am always awestruck and am glad that it’s on the list.

The idea of a bridge spanning the Golden Gate was not new. A former engineering student, James Wilkins made the original proposal that eventually took root in a 1916 San Francisco Bulletin article. San Francisco’s City Engineer estimated the cost at $100 million, impractical for the time, and fielded the question to bridge engineers of whether it could be built for less. One of the responders, Joseph Strauss, was an ambitious but dreamy engineer and poet. At the time, Strauss had completed some 400 drawbridges—most of which were inland—and nothing on the scale of the new project. Strauss’s initial drawings were for a massive cantilever on each side of the strait, connected by a central suspension segment, which Strauss promised could be built for $17 million.

Local authorities agreed to proceed only on the assurance that Strauss alter the design and accept input from several consulting project experts. A suspension-bridge design was considered the most practical, because of recent advances in metallurgy.

Strauss spent more than a decade drumming up support in Northern California. The bridge faced opposition, including litigation, from many sources. The Department of War was concerned that the bridge would interfere with ship traffic. Unions demanded guarantees that local workers would be favored for construction jobs. Southern Pacific Railroad, one of the most powerful business interests in California, opposed the bridge as competition to its ferry fleet and filed a lawsuit against the project, leading to a mass boycott of the ferry service.

In May 1924, Colonel Herbert Deakyne held the second hearing on the Bridge on behalf of the Secretary of War in a request to use Federal land for construction. Deakyne, on behalf of the Secretary of War, approved the transfer of land needed for the bridge structure and leading roads to the “Bridging the Golden Gate Association” and both San Francisco County and Marin County, pending further bridge plans by Strauss. Another ally was the fledgling automobile industry, which supported the development of roads and bridges to increase demand for automobiles.

The bridge earned its name, Golden Gate Bridge, after a mention of it in 1927 by San Francisco city engineer Michael O’Shaughnessy.

The Golden Gate Bridge and Highway District, authorized by an act of the California Legislature, was incorporated in 1928 as the official entity to design, construct, and finance the Golden Gate Bridge. However, after the Wall Street Crash of 1929, the District was unable to raise the construction funds, so it lobbied for a $35 million bond measure. The bonds were approved in November 1930, by votes in the counties affected by the bridge. The construction budget at the time of approval was $30.1 million. However, the District was unable to sell the bonds until 1932, when Amadeo Giannini, the founder of San Francisco–based Bank of America, agreed on behalf of his bank to buy the entire issue in order to help the local economy.

Construction began on January 5, 1933. The project cost more than $35 million. Although on the pricey side it was still considerably less than the original estimate of $100 million.

Strauss remained head of the project, overseeing day-to-day construction and making some groundbreaking contributions. A graduate of the University of Cincinnati, he had placed a brick from his alma mater’s demolished McMicken Hall in the south anchorage before the concrete was poured. He innovated the use of movable safety netting beneath the construction site, which saved the lives of many otherwise-unprotected steelworkers. Of eleven men killed from falls during construction, ten were killed (when the bridge was near completion) when the net failed under the stress of a scaffold that had fallen. Nineteen others who were saved by the net over the course of construction became proud members of the (informal) Halfway to Hell Club.

The Golden Gate Bridge, completed after more than four years of construction, is a visitor attraction recognized around the world. It opened to vehicular traffic on May 28, 1937 at twelve o’clock noon, ahead of schedule and $1.3 million under budget, when President Franklin D. Roosevelt pressed a telegraph key in the White House announcing the event.

Tomorrow, we will look at number 9 on the list, the I-10 Katy Freeway Expansion.