Kobelco Construction Machinery America recently joined the crew of “Extreme Makeover: Home Edition” for a project in eastern Texas. The company provided a Kobelco SK210 excavator to demolish a home so that a new one could be constructed for a very deserving family.

Most Americans are familiar with the ABC television series “Extreme Makeover: Home Edition.” Each week on the show, a deserving family is selected to undergo a dramatic home “makeover,” which may involve a large addition, remodel, or demolition of the existing house and complete construction of an entirely new home. A team of designers, contractors and several hundred workers have just seven days to completely rebuild an entire property, including landscaping – a project that normally takes up to nine months to complete.

For this project, the Carr family of Mineola, Texas – a small town about 80 miles east of Dallas – was selected for a home 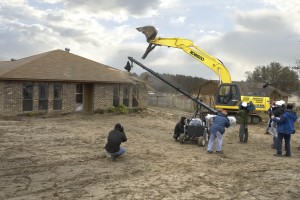 transformation. The Carr’s four adopted children have had to overcome severe physical and mental disabilities while living in a cramped and dangerous home. Compounding the family’s struggles, the father has undergone pancreas and kidney transplants in recent years.

The family’s small, three-bedroom home was at high risk for fire due to a faulty electrical system. The home was not handicap accessible for the children, plus plumbing leaks throughout the house created mold issues.

Kobelco SK210 Excavator to the Rescue

When word reached the local community that the show had selected the Carr home, businesses, corporations and individuals from all over eastern Texas offered to contribute. One of the early volunteers was Eugene Toole, a local demolition contractor. Toole is a customer of Bane Machinery, a Kobelco dealer with four locations in Texas, including the nearby town of Tyler. The staff at Bane Machinery quickly coordinated with the production crew to deliver the much-needed construction equipment to the site. 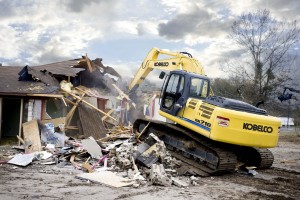 On a rainy Friday, the show’s production crew and an army of more than 3,000 volunteers and donors descended on the Carr home. Once the power lines and water lines were moved, demolition on the home began. With Toole at the controls, the Kobelco 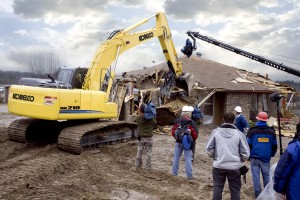 SK210 excavator tore through the shingles, plywood, trusses and studs, reducing everything to a pile of rubble within minutes. Toole then switched to a crawler dozer to help clear the rubble and build the pad for the family’s new 4,800 square foot home.

“Kobelco is proud to be part of such a generous effort for this family. We extend our appreciation to Eugene and Bane Machinery for their help and support,” said Alan Jenkins, territory sales manager. “Improving the lives of the Carr family is a rewarding experience on many levels.”

The Kobelco SK210 excavator will be seen on the episode scheduled to air on the ABC television network on Sunday, May 2, 2010, at 8 p.m. Eastern, 7 p.m. Central. 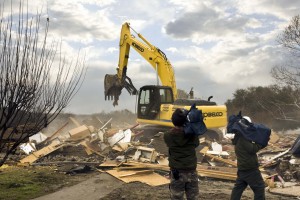