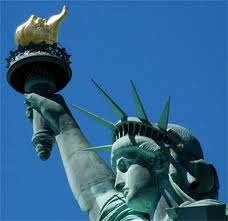 Joseph A. Natoli Construction Corporation proves stronger than Superstorm Sandy and nears completion of recovery efforts. The New Jersey firm has worked at the international symbol of freedom for twenty years.

New Jersey-based contractor Joseph A. Natoli Construction Corporation (Natoli Construction) has completed over three months of extensive repairs, renovations and other post-Superstorm Sandy recovery efforts on Liberty Island. This work is being done on behalf of the National Park Service (NPS), and allows the Statue of Liberty National Monument to reopen on July 4, 2013. The Monument receives more than 3.5 million visitors annually. Full repairs are scheduled to be completed by October 2013.

The super-storm damaged the promenade, grounds, buildings, and much of the infrastructure on Liberty Island. Natoli Construction removed and replaced mechanical, electrical, and plumbing (MEP) systems destroyed by severe flooding. The firm is completing the relocation of all electrical switches and equipment from basement level to a new steel floor, erected 14 feet above ground level to comply with new FEMA regulations and to prevent future damage and loss of power during subsequent storms. It also performed complete overhauls of the island’s administration, concession and maintenance buildings.

“For over twenty years Natoli Construction has performed significant projects at the Statue of Liberty and Ellis Island National Monument,” states Paul Natoli, President and CEO of Joseph A. Natoli Construction Corporation. “Our company is honored to be stewards of this iconic site and we are extremely proud to help the NPS reopen the Monument to visitors from all over the world.”

Prior to the arrival of Superstorm Sandy, Natoli Construction performed a year-long, $30 million project for the NPS to improve visitor experience, accessibility and safety at the Monument. Following completion of these upgrades, the Monument reopened to the public on October 28, 2012. However, it was immediately closed the next day because of the approaching storm, which caused considerable damage to both Liberty and Ellis Islands. The Statue itself was not affected.

About Joseph A. Natoli Construction Corporation

Joseph A. Natoli Construction Corporation is a full-service contractor/construction manager with

broad experience building for private commercial companies, medical and educational institutions, hotels and other projects throughout New Jersey. Founded in 1975, the company has done work for such prestigious clients as the National Park Service, The Statue of Liberty – Ellis Island Foundation, New York Football Giants, Delbarton School and Rutgers, The State University of New Jersey.