In December of 1959, the first production Cat wheel loader was driven off the assembly line at the Caterpillar plant in Aurora, IL – the 944 Wheel Traxcavator.

The 944, fitted with a 2-cubic yard (1.5-m³) bucket and available with either a 105-horsepower (78 kW) gas or diesel engine, was the culmination of a seven-year development effort—and the beginning of Caterpillar’s leadership in the worldwide market for mid-size wheel loaders. Caterpillar’s 50-year dominance in this market segment has hinged, simply, on customers recognizing the inherent value of the Cat Wheel Loader—its fundamental reliability and durability, coupled with exceptionally strong parts and service support.

The release also quoted W. S. Zeigler, domestic sales manager, who summed up Caterpillar’s goal for developing the new wheel-loader line: “These new Traxcavators will enable operators to perform their work quickly and well, and give them safer working conditions.” 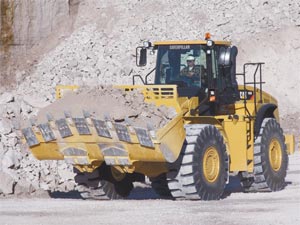 Time changes most everything, but the basic qualities Mr. Zeigler noted about the first Cat wheel loaders have remained constant through 50 years of continual refinement and through the placement of more than 100,000 Cat Medium Wheel Loaders in the hands of customers.

Developing new products in the 1950s was a long, laborious process, necessitating many prototype models and thousands of hours of in-the-dirt testing. Today, of course, the power of computer-aided design allows testing virtual prototypes, and today’s engineers can perform more evaluation in hours than could their 1950s counterparts in months of field-testing.

But the basic philosophy of Caterpillar’s product development process has not changed; when designing the 944, engineers asked customers what features they wanted in wheel loaders—and Caterpillar engineers are still asking that question. The 944 engineers learned, for instance, that wheel-loader users wanted loader arms and hydraulic cylinders positioned forward of the operator’s compartment. Good idea—because the side-mounted loader arms of the day’s competitive designs brushed past the operator’s elbows with every bucket load.

Front-mounted lift arms were included in the 944’s design and became a Caterpillar exclusive. Through the decades, the design of Cat Medium Wheel Loaders has reflected customer input and the best technology to yield efficient, durable, safe machines that operate at low-costs.

The 944’s pre-combustion-chamber diesel engine, for example, gave way in the early 1980s to more efficient direct-injection engines, then to electronically controlled engines, and finally to the Cat ACERT diesels that deliver a combination of fuel 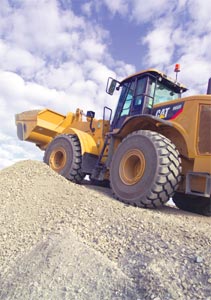 efficiency, emissions control and power density that 1950s engineers would have thought impossible.

Power-shift transmissions, once controlled by mechanical linkage, are now electronically managed and feature Variable Shift Control to match gear-change patterns to the application. Belt-driven cooling fans have given way to fuel-saving on-demand fans; loader linkages have been strengthened and simplified; and the stark operator stations of early loaders are now the ultimate in operator comfort, convenience and safety (even allowing hands-off operation when the optional Aggregate AutoDig system automates the loading process).

W. S. Zeigler’s words are still true of Cat Medium Wheel Loaders; these machines still “enable operators to perform their work quickly and well, and give them safer working conditions.” Today’s machines also still deliver the essential reliability and durability that has been the hallmark of Cat Wheel Loaders from the very start—and today’s machines, building on the persistent refinement of their predecessors, continue to add even greater value for the operator, the owner—and the environment.