February 28 is a special day in the history of the federal highway program and Highway Trust Fund that supports it.  On this day, 53 years ago, President John F. Kennedy (JFK) saw a threat to the nation’s future economic growth and security and grabbed the reins of leadership.

“Our federal pay-as-you-go highway program is in peril,” JFK said in the first sentence of a “Special Message to the Congress on the Federal Highway Program” sent up to Capitol Hill that day.

The problem:  the user based revenue stream going into the Highway Trust Fund was not sufficient to sustain the level of authorizations necessary to keep the highway program running without going into deficit spending.  Kennedy told the Congress $900 million more dollars per year ($7.04B in 2014 dollars) was necessary.

“Our objective,” Kennedy said, “is to finance this program on a pay-as-you-go basis from… user taxes… at rates sufficient to pay the full cost of the program, without charge on general federal revenues… “The pay-as-you-go principle… requires an increase in the revenues from user taxes…”

It is clear, he said, “that a program essential to the nation, and to [the public’s] own welfare, requires that they cooperate in determining how present sources are to yield the additional revenues needed.”

Kennedy offered what he called “A New Plan to Finance the Highway Program.”  He urged Congress to sustain the federal gas tax revenue stream and increase the user fees on trucks—the federal diesel fuel excise increased from 4 cents per gallon to 7 cents; truck weight excise for vehicles over 26,000 lbs. from $1.50 per 1,000 lbs. to $5.00 per; the excises on sale of new tires from 8 cents per tire to 10 cents, the sale of tire inner tubes from 9 cents per to 10 cents, and tread rubber from 3 cents to 10 cents.

On June 29, 1961, the 87th Congress of the United States responded, approving the “Federal Aid Highway Act of 1961,” (Public Law 87-61), generally following the path outlined by the President.

The Highway Trust Fund crisis was averted.  Filling out and construction of the 41,000-mile Interstate Highway System and ongoing improvements to the 848,677 miles of state roads deemed worthy of federal investment due to their importance to the nation’s economy and security continued forward.   No American jobs were lost.

Footnote:   Despite claims to the contrary, the federal gas tax is not “broken” or “outmoded” as a mechanism to raise user revenue for the Highway Trust Fund.  The only problem with the gas tax as a revenue generator is that the rate has been frozen for 20 years and the rate has never been indexed, or adjusted, to keep pace with annual price inflation or to meet identified needs.  It is a fact that if Congress had indexed the 1961 federal gas tax rate of 4 cents per gallon to future annual inflation, the gas tax alone would be generating almost $56B this year for Highway Trust Fund investments.  There would be no 2014 HTF crisis looming October 1 that could shut-off federal investment for any new state transportation department highway, bridge and transit projects during FY 2015.  It is also a fact that today’s 18.4 cents per gallon federal gas tax has 50 percent less purchasing power than the 4 cents per gallon tax had in 1961. 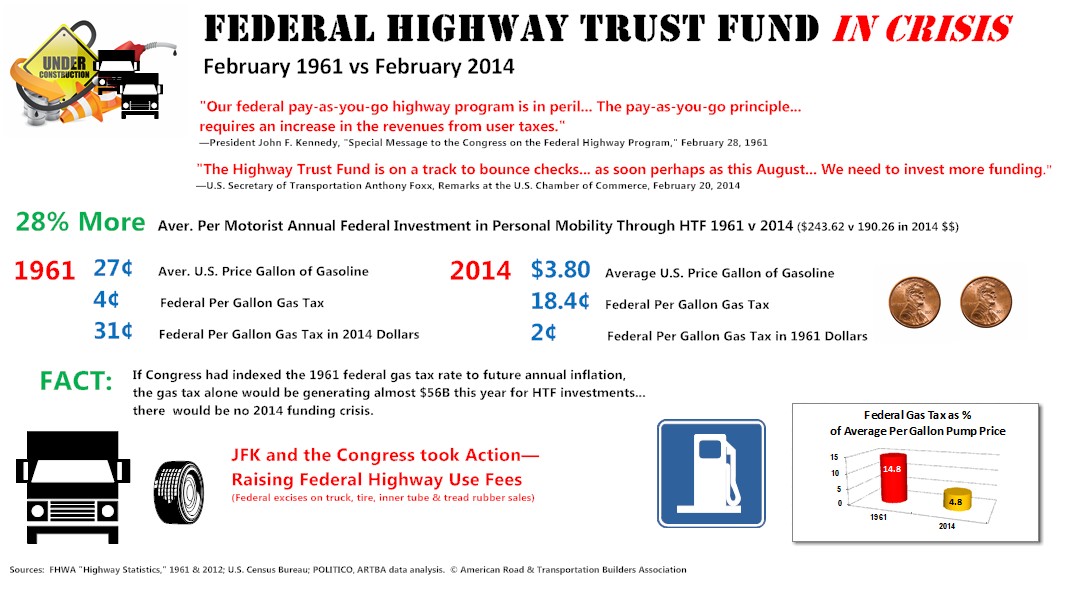