Colorado Governor Bill Ritter (D) announced Thursday that the Colorado Department of Transportation (CDOT) opened contractor bids on the first five transportation projects, nearly $15 million of Colorado’s expected $403 million worth of road projects, to be funded through the American Recovery and Reinvestment Act. Colorado will receive $103 million for transit projects.

“This is a major step forward for Colorado,” Gov. Ritter said. “Construction is expected to begin on these projects in the next month, and that means jobs saved and jobs created for Colorado workers. We continue to move as quickly, efficiently and effectively as possible to ensure the Recovery Act is doing what it is intended to do.”

The apparent low bids for all five projects came in under the price tag CDOT had estimated, with the apparent winners undercutting CDOT’s estimates by up to 30 percent. On Monday, Site-K Construction Zone reported that nationally, projects were coming in as much as 25 percent below project prices.

“It was very positive to see such competitive bidding on our first round of ARRA projects,” said CDOT Executive Director Russ George. “The project bids came in an average of 12 percent lower than expected. If this trend continues, we may be able to accumulate enough funding to add more construction projects to our list.”

The five paving projects and apparent low bidding contractors include:

CDOT expects to finalize contracts within the next few weeks, with work on the projects expected to start in May.

Bids for the sixth project — repairing two bridges on Interstate 76 that cross the Union Pacific railroad tracks and Colorado 224 in Adams County, and the last in the first group of CDOT’s federal stimulus projects — will be opened April 9.

How important is the stimulus funding? For many contractors it’s critical since they derive a high percentage of their work from government contracts.

For nearly 25 years, family-owned and operated Jalisco International Inc., a heavy highway construction company based in Commerce City, CO has been working on roads and bridges in Colorado. More than 90 percent of its business comes from government and public construction contracts. 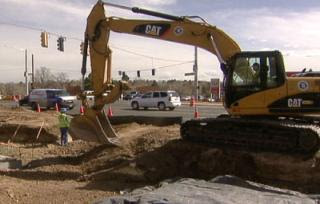 “Those contracts started drying up last summer and since then we laid off about 8 percent of our workforce,” Antonio Ledezma said.

Ledezma’s family owns Jalisco International. Last week, a small crew worked on an expansion project at the intersection of South University Boulevard and East Arapahoe Road in Littleton. They are among the ones that avoided lay offs, but were not spared other affects from the slow economy.

Jalisco International is hoping to hire back some workers if it can win contracts for some of the dozens of infrastructure projects funded by the American Recovery and Reinvestment Act.

Roughly $317 million has been allocated to the Colorado Department of Transportation (CDOT) for such projects and the department and contractors alike are eager to see the money serve its purpose.

“We’ll have 48 projects going to bid this summer as part of the recovery funds and this is going to be huge for contractors because it’s going to get their folks back to work. It’s also good for CDOT, without this money it would be a struggle for CDOT to build and maintain roadways like we need to,” CDOT spokesperson Mindy Crane said.

Due to the recession and the many contractors facing situations similar to Jalisco International, the bidding for the road and bridge projects will likely be fierce. Ledezma predicts the shortage of work will bring new meaning to “low bid contracts.”

“It’s going to be competitive. The state, the cities and counties involved in this are going to get a lot of work for probably the lowest amount of money than at any other time because everybody needs work,” Ledezma said.

It’s work Ledezma hopes his workers will win, if their price is right. Bids for the resurfacing/rehabilitation projects will open up on April 9 and the bid for the bridge replacement project will open April 16.

CDOT estimates the contracting process usually takes one to two months. The six projects now advertised will likely be awarded in May with construction beginning in late May or early June.

For more information about transportation projects visit the Colorado Economic Recovery and Accountability website or the CDOT website.