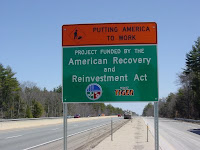 According to the New Hampshire Department of Transportation, the project, pavement rehabilitation of 9.5 miles of heavily-trafficked freeway on NH Route 101 in Epping and Exeter, extends from the east side of the Lamprey River in Epping to just east of Exit 9 in Exeter. It will create and sustain up to 250 direct and indirect jobs, 50 of them new.

It is necessary to preserve and extend the condition of the existing roadway to meet current and future traffic needs. This work includes pavement overlays at varying depths depending upon specific pavement needs, upgrading guardrail, and adjusting drainage and curbing as needed for paving. The project will also resurface several bridges.

Paving work is expected to begin the first week of May and will take place during nighttime hours, between 7pm and 7am. Nighttime lane closures and traffic shifts will be necessary in order to perform the work. During work hours, the speed limit through the work zone will be reduced from 65 to 55 mph. Uniformed officers will help guide motorists through the work zone.

The repaving of NH Route 101, a major east-west corridor in southern New Hampshire connecting Epping to Hampton, which serves as the main artery to New Hampshire’s seacoast as well as its largest city, Manchester, is a project that wouldn’t have started this soon without the federal help, officials said.

As has been the growing trend with recovery projects around the country, Route 101 is being resurfaced for a cost substantially below engineers’ initial estimates due to heightened competition among contractors. While the original project estimate for Route 101 was $8.5 million, the final bid from Pike Industries of Belmont, NH came in at $7.8 million, or 8.6 percent below the state-budgeted amount.

This project is putting hundreds of people to work to rebuild Route 101, which will boost the local economy all along New Hampshire’s seacoast for years to come. And because we’re getting it done under budget, New Hampshire will be able to stretch its federal dollars even further to get more for its taxpayers’ money, ” said Sec. LaHood.

Secretary LaHood said the Obama Administration is committed to getting stimulus funding into the economy as quickly as possible. He noted that President Obama signed the American Recovery and Reinvestment Act (ARRA) into law on February 17, less than one month after taking the oath of office. Less than two weeks later, on March 3, Sec. LaHood joined President Obama and Vice President Biden at the U.S. Department of Transportation in marking the release of the first transportation infrastructure project funds. On Monday, under six weeks after the first announcement, President Obama and Vice President Biden joined Sec. LaHood once again to announce funding for the 2,000th transportation project.

But the roadwork will eventually end. Projects created by the stimulus program must be completed within 18 months. Secretary LaHood said something should be done to retain those jobs.

“Congress needs to pass an authorization bill that will continue the progress that we are seeing here today,” LaHood said.

He called for a new transportation bill that would continue road projects across the country for five more years. The price tag for that would be up to $350 billion. LaHood said the road projects are just one part of the overall plan to stimulate the economy. The goal for his department is to get people back to work quickly.

The Route 101 project could be wrapped up as soon as August, state officials said. LaHood said he hopes that the 50 new jobs created will be transferred to other road projects in the state.

Additional Highway And Bridge Projects In NC Expected To Help Create Or Sustain More Than 6,000 Jobs

North Carolina Governor Bev Perdue announced today an additional 64 highway and bridge projects totaling about $209 million, including $44.5 million worth of projects in the Triangle, that will be funded through the American Recovery and Reinvestment Act (ARRA). The projects identified to date total $679 million, more than 90 percent of the $735 million in recovery money North Carolina has received for highway and bridge improvements.

Triangle projects in the new batch announced Friday include:

These projects will be let to contract over the next 12 months.

The North Carolina Department of Tr
ansportation (NCDOT) had already identified about 70 highway and bridge projects to be let to contract between March and June through recovery funding. Eleven projects totaling $65.1 million were awarded to contract in March.

“North Carolina is leading the nation in efforts to expedite the selection of projects and get them under way as quickly as possible to get our people to work,” Perdue said. “Given our current economy, it is critical that we are using our recovery money to help put people to work and create much-needed economic growth for our communities.”

NCDOT has worked with local planning organizations across the state to determine which projects will be funded, taking into consideration the equity formula set by the North Carolina General Assembly (NCGA). Some areas have chosen to dedicate their share of the money to a single large project instead of multiple projects, and other regions are still in the process of determining which projects will be funded. In addition, the state’s largest metropolitan planning organizations have received direct allocations of recovery money and they are working to identify projects to be paid for through this funding.

Earlier this month, Gov. Perdue was joined by Transportation Secretary Gene Conti and other local officials at a groundbreaking event for a recovery project that will widen U.S. 158 in Camden County. The $6.1 million contract was awarded to RPC Contracting, Inc., of Kitty Hawk.

Gov. Perdue announced in February that she will also pursue discretionary grant money included in the stimulus bill to use for the $300 million replacement of the Yadkin River Bridge on I-85 in Davidson and Rowan counties. Perdue and Transportation Secretary Gene Conti are working with Senator Kay Hagan (D), Representative Mel Watt (D, NC-12) and the rest of North Carolina’s congressional delegation to obtain funding.

NCDOT is continuing to work with its local partners to identify projects to be funded through the remainder of the available money, including public transportation projects funded through the $103 million North Carolina received for transit improvements.