The “Missing Link” of a combined sewer separation program spanning decades and involving four Connecticut communities is now under construction for the Greater New Haven Water Pollution Control Authority (GNHWPCA or the Authority).

Wastewater collection for Trumbull Street is currently provided by a 60-inch brick sanitary sewer built in the 1860s. Unfortunately, the sewer also collects storm water from building roof leaders, runoff from streets and parking lots, and about 120 acres of previously separated storm water from upstream areas. And while the brick sewer is said to be in excellent condition – thanks to the craftsmanship of the original builders — it can’t accommodate today’s combined flows during heavy rain and snowfall.

“Combined flows can increase quickly from a rate of 35 million gallons per day to well over 100 million gallons during a major storm event, exceeding the capacity of the sewer and the treatment plant,” said Mario Ricozzi, P.E., Manager of Design for GNHWPCA.

Due to its complexity, the Authority divided the sewer separation work into two contracts — Phase 1A and Phase 1B.

Phase 1A consists of work on the Trumbull Street Area, the downstream section,  managed by Cardinal Engineering of Meriden,

Phase 1B, which runs right through the urban Yale campus, was commenced first and was completed in June 2011.

C.J. Fucci won both contracts in the public bidding process, and subcontracted the extensive pipe-jacking for both contracts to M & P Pipe Jacking Corporation of Newington, Conn. Luigi DiMonaco, the Authority’s Construction Administrator, is overseeing the project.

Design manager Ricozzi said there were many challenges to completing the missing link. For example, there are a number of municipal and Yale University construction projects under way in the sewer project area. There are numerous utilities, including underground gas lines, water mains and conduits, together with overhead wires, that all have to be relocated from the path of the new storm drain and sewer lines.

Owing to the strategic location of Trumbull Street as the main access road to downtown New Haven and Yale, an intricate traffic detour program had to be worked out by project engineers and several City of New Haven and State Department of Transportation Agencies.

Furthermore, the project team has to protect legacy trees lining the busy thoroughfare. Stately sycamores and other large old trees, some of them up to five-feet in diameter, are to be avoided by construction if at all possible. Roots can’t be cut for fear of destroying trees. To address this environmentally sensitive issue, the design team hired The Care of Trees, a division of the Davey Group, to lead a tree preservation effort. These specialists inventoried, inspected and rated each tree along the route, noted Ricozzi.

“The root systems were located using ground penetrating radar to establish the relative size, location, and depth of roots. After analyzing the data, the team decided to use pipe jacking and push the pipe below the roots to preserve the trees,” Ricozzi explained.

Basically, the current project will redirect all sewage from building sanitary sewer laterals into a new 36-inch RCP sewer. All storm water will be carried by the new 72-inch RCP storm sewer. The existing brick sewer will remain in place, but once this project is completed it will carry only sanitary sewage. 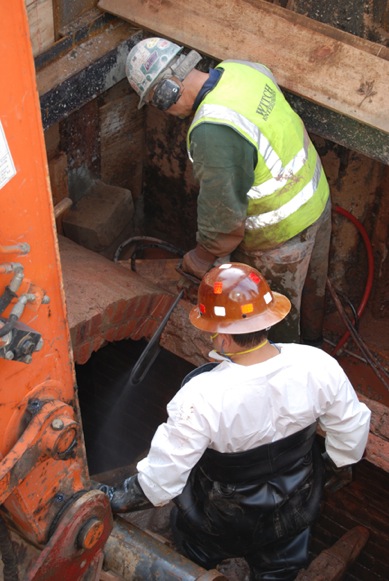 The success of this plan relies on having three parallel sewer pipes installed very close together down Trumbull Street. From curbside, left to right, they are a 36-inch RCP sanitary sewer, a 72-inch RCP storm water sewer, and the existing 60-inch brick sewer. M&P is jacking the 36-inch pipe and the 72-inch pipe side-by-side, with the smaller pipe slightly lower than the larger pipe and only 5 feet between their centerlines. The 72-inch RCP and 60-inch brick sewer are typically separated by between just one and two feet.

In one area near the intersection of Trumbull Street, Temple Street and Whitney Avenue, there was not enough space to install a single 72-inch pipe so instead twin 48-inch pipes were to be installed.

Adding to the uniqueness of this project is the fact that in some places there is only 2-1/2 feet of cover available over the 72-inch pipe. A rare occurrence, according to Gene Zwicharowski, superintendent of C.J. Fucci’s Underground Utility Division:

“The old industry standard was ‘double the diameter of the pipe’ for earth cover,” said the longtime construction veteran.

Zwicharowski said many complex tasks linked to the means and methods employed in construction were left up to the contractor. The contractor’s project engineer, Neil Velleca, P.E., had the prime responsibility for these tasks, which included maintaining sewer flows to existing buildings and monitoring the extremely close, parallel 60-inch brick sewer during construction and designing non ground bearing reaction walls for pipe jacking pits.

Before pipe jacking could begin, however, it was critical that continuous sewer services be provided to the many buildings on Trumbull Street.  All sewer laterals on the south side of the street had to be cut from the path of the jacked pipe and connected to a temporary bypass system. Baker Corp. provided the diesel and electric by-pass pumps for this essential operation.

In situations where there is poor bearing soil or the pit is too shallow to build a typical thrust wall, crews usually build reaction walls in pits to resist the thrust of jacking cylinders against the pipes. These reaction walls transfer horizontal loads to a structural framework. For this project, Fucci workers formed and cast concrete walls in place against a framework they previously fabricated

of steel HP12x63 vertical and battered piles and 8×28 walers.

The general contractor excavated and erected earth support systems for three jacking pits and three receiving pits.  M&P used four, 200-ton Rogers hydraulic jacks to push pipe through the soil. The jacks actually push against a steel ring-shaped shield designed to protect pipe and distribute forces evenly around its circumference. As part of this process, M&P workers enter the pipe to hand-shovel encapsulated soil into a wheeled cart which when full is pulled by cable back out of the pipe into the pit. A backhoe or crane then raises the cart to street level for disposal of the spoil.

According to Tim Tarini, construction coordinator for C.J. Fucci, M&P is jacking about 900 feet of 36-inch RCP sanitary sewer, 1250 feet of 72-inch RCP storm sewer, and 520 feet of twin, 48-inch RCP storm sewer. All RCP pipe is manufactured by Hanson Pipe and Precast, with Dean Logee serving as Hanson’s sales representative for the project. Pipe is being supplied through VIP Supply Inc. of Clinton, Conn.

Tarini said he expects construction for the complex, high-profile sewer separation project to be essentially completed by mid-2013.

When the entire project is operational, it will provide many environmental benefits for the Greater New Haven area. Not only will

the long-awaited missing link for separated storm drainage be in place, but combined sewer overflows to the Mill River will be greatly reduced, rainwater flows to the treatment plant will be cut, local roadway drainage will be improved, and the sanitary sewer will have greater capacity.

This article appeared in the June 2012 issue so New England