On massive industrial park project, the latest scanning technology helps get it right the first time. 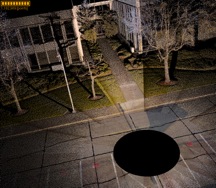 For engineering firms, one of the biggest drawbacks to traditional surveying techniques has long been the need to revisit a project because some feature, some measurement, some element of the initial survey had either been missed or now needs to be expanded upon. Revisiting the site to resolve these issues can be costly, not only in budget dollars but, more importantly, in lost project time. So when Barghausen Consulting Engineers recently undertook a project to do ALTA surveys on a huge industrial site near Seattle, they opted to supplant the standard surveying approach with the use of a Topcon GLS-1500 laser scanner.  Doing so, the company reports, has already proven beneficial on a number of occasions and, by nature of eliminating costly, time-consuming reshoots, has resulted in a significant savings to the project’s survey budget.

Multi-Disciplined Company Barghausen Consulting Engineers, is a Kent, Washington-based firm that specializes in providing engineering support for almost all facets of land development projects, including those for industrial, residential, commercial, and mixed use markets.

“As a company we offer everything from project management to permitting to a broad range of services for the civil engineering sector,” says Trevor Lanktree, one of the company’s project surveyors, “The only thing we really don’t do is any kind of major highway work.  We’ve been in operation for about 31 years now and, in that time, have seen a lot of changes to the way we do our jobs.”

One of those changes includes the use of GPS technology in the survey aspect of the business.  Barghausen had been a long-time proponent of the satellite-based approach to measurement but about five years ago, realized that not all equipment was created equal.  Lanktree compared data from two systems and says that the differences were impressive. The Topcon system offered better accuracy and was unable to get difficult shots like those next to the trees.

“So when we took on this large industrial park project, we knew what we needed and knew where to find it,” says Lanktree.

The project to which Lanktree refers, is a 90-acre industrial site.  Barghausen is conducting a full ALTA (American Land and Title Association) survey as part of a new construction-related boundary-line adjustment.

“The site contains about 50 structures of different use, including manufacturing, office and storage, and it includes everything from 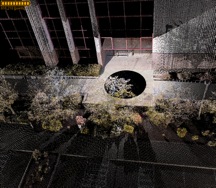 a 100’ plus tall buildings to underground tunnels,” says Lanktree.  “We have known about laser scanning for some time and this seemed the ideal project to give it a try.  In retrospect, we probably should have started with a smaller job, but we jumped in feet first and have been blown away by what we’ve gotten.”

The full scope of the job was, indeed, impressive.  Over the course of six weeks (due to traffic and weather constraints), Lanktree and his team set up in 88 scan positions and shot a total of 110 scans While a traditional survey would probably have netted about 20,000 points, he estimates the GLS-1500 has given them close a billion.

“The laser scanner gathers data at a rate of about 30,000 points per second,” he says. “It is really an impressive piece of equipment Collin initially told us that it has a single point accuracy of about .16 inch up to 500 feet and we were skeptical. But we did some long-range scans in which we set up at the south end of this project and shot all the way through it. In those scans, there is a tall building located more than halfway into the site that was generating what we thought were just random points. But when we got to a time when we could map the building, we found that those ‘random’ points from the distant scan were, in fact, right on the money.”

As mentioned, the overriding benefit derived from an instrument like the GLS-1500 in this application, is its ability to gather information which can be called up, examined, manipulated and measured at any time in the project.  Lanktree says that, because the industrial park project is still in its early stages, they haven’t had that call yet.  But he definitely anticipates it.

“It’s inevitable that the design team will soon start asking for additional data regarding onsite features and when they do, that’s when the savings on this project will just erupt.  Being able to expand the scope of the project by just manipulating data is an invaluable advantage.”

And it is an advantage that is quantifiable, he adds. Based on work done at the industrial park to date, Lanktree estimates that the survey portion of the project has already come in 25% under budget.  That number will certainly rise as requests for data contained in the massive scan come about.

Putting it All Together

When actual scanning of the industrial site was done, data was downloaded to an SD card and brought back to Barghausen’s offices for registration.  In this process, says Lanktree, each of the different scan position’s points is aligned with those from other scan position points.

“When this procedure is done, you are left with a scan of the entire site. At that point, if you could turn all the data on at once (impossible for us due to hardware constraints) you could virtually walk through the industrial park.  So now, if the design team wants to know a specific on any feature—say the height of a wall, the location of piping, anything—we have it for them.  It is that flexibility of data that is so key to the value of the scanner.”

Lanktree says they’ve seen examples of that on other projects, most recently on a job in which the contractor said he wanted to know the grade of a handicap access ramp for ADA compliance.

“So we went out and used the GLS-1500 to scan the ramp, the structure to which was attached and a pretty decent piece of the area surrounding it,” he says.  “Two days later, that contractor called saying he needed to show where concrete on the project ended, so he needed to revise his plans to include a profile showing everything 20 feet each way.  A few days later, he then called back again and asked for a profile that covered 100 feet in either direction.”

Had they done that project with a traditional instrument, says Lanktree, they would have needed to go back out twice to reshoot it. That means incurring the cost of a crew, travel time there and back, setup time, and so on.

“In this case, we simply pulled the file and kept growing the drawing to meet his needs,” he says.  “That’s exactly the kind of scenario we are prepared for in the industrial park job.  We have a wealth of information contained in the data from those 110 scans and it will be a tremendous help for the design team on the project.  It’s a perfect example of why scanning is so well-suited for this type of work.”

This article appeared in the national section of the ACP magazines, June 2012