“The question becomes whether the data indicate an end to a short period of recovery, or whether the recovery was temporarily halted by snow and cold temperatures.” —ABC Chief Economist Anirban Basu. 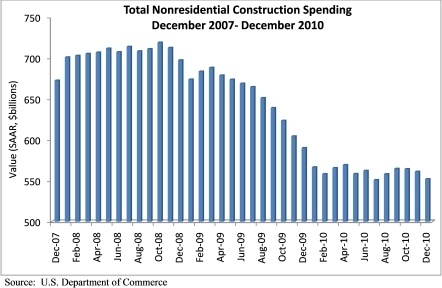 Meanwhile, private nonresidential spending slipped 0.5 percent in December following three straight months of increases, and is down 12.3 percent from the same time one year ago.

“Without a doubt, the nation’s weather played a role in shaping the December construction spending data,” said Associated Builders and Contractors Chief Economist Anirban Basu. “Prior to December, private nonresidential construction spending was rising in America. However, the question becomes whether the data indicate an end to a short period of recovery, or whether the recovery was temporarily halted by snow and cold temperatures.

“There is evidence to suggest that the impact of federal stimulus spending is steadily exiting the construction spending data. For instance, the largest monthly decline among the sixteen nonresidential construction sectors was in conservation and development, a segment closely related to federal spending and investment,” said Basu.

“Public safety-related spending also declined sharply in December, which may reflect sharp cuts in state and local government spending. In other words, the outlook for publicly financed construction is dimming and the December data fit neatly with that outlook,” Basu said.

“The construction segment with arguably the brightest outlook going forward is power. With oil prices above $90 a barrel, there is reason to believe that power will be a bright spot for nonresidential construction spending this decade,” said Basu. “In addition, there remains a large amount of deferred maintenance to be completed within the nation’s power industry, which suggests that 2011 construction spending in that economic segment will expand.”