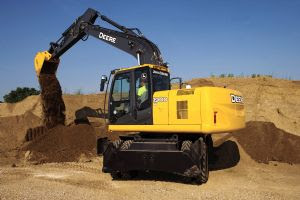 It’s easy for us to forget that our economic condition has an impact on our Canadian neighbors. But, it does, especially in some industries. Construction equipment manufacturers and their dealers are hurting. And for some the immediate future isn’t as good as we might think.

With the economy stalling and construction projects shutting down for want of funds, prospects for heavy equipment manufacturers and their dealers aren’t rosy, states Ian Harvey, a correspondent for Daily Commercial News, a Canadian construction journal.

Most are anxiously waiting to see which way the chips will fall: Will Stimulus Packages announced by governments around the world include enough infrastructure projects to trigger investments in new equipment or will they fall short of expectations with money going to shore up social safety nets and training programs? It’s the trillion-dollar question and so far the news isn’t entirely positive.

“No one has a crystal ball but at first blush, from what I’ve seen in the headlines, there’s not as much infrastructure as I’d have anticipated,” says Craig J. Olson of John Deere’s Construction & Forestry Division in Illinois. “With infrastructure crumbling the way it is in America you could easily spend $100 billion on bridges alone and $100 billion on wind power, airports or the power grid.

He says there are many projects across the continent that have completed engineering studies and environmental assessments and are just waiting on funding.

“Still, despite the economy, we think we will do all right,” he says. “We’ve continued to innovate and we have some new products coming out which will help.”

(Note: Early next week John Deere Construction Equipment will be hosting a press event in Phoenix, AZ for the introduction of several new products.)

The trend is clearly downward as the Associated General Contractors of America (AGC) noted in a December member survey of 236 respondents who reported they had seen or expect a downturn in highway (93 per cent); building (92 per cent); utility (84 per cent); water resources (78 per cent); other public work (91 per cent); and private construction (96 per cent).

Three-quarters had lain off workers in the past 6-12 months as a result of the downturn; the median response was about 30 per cent of the workforce laid off. Worse still, nearly two-thirds expect further layoffs in the next six to 12 months. However, 86 per cent said if their state received extra federal funding and was able to put additional projects out to bid, they would avert layoffs and/or hire additional workers.

Finning, a Vancouver-based heavy equipment dealer also laid off more than 500 employees from a head count of more than 12, 000 globally.

Peter Blake, CEO of heavy equipment auctioneer Ritchie Brothers, says either way heavy metal will still sell. “We’ve been around for a while and through a few of these cycles,” he says. “And we have good growth in good time and do better in bad times.”

The other equipment sector that could swing either way is the rental market. While Hertz, United Rentals and others are all feeling the pinch, there’s some hope that instead of buying or long term leasing equipment, contractors will rent on an as needed basis.

(Note: The American Rental Association (ARA) will be having its annual convention and The Rental Show next week in Atlanta, GA. It will be interesting to see how the attendees feel about the economy, the Stimulus Package and the future of the industry.)

“There are a lot of companies in distress trying to sell equipment but I’m not sure there are willing buyers,” says Ken Simonson, chief economist for AGC.

However, he says if the Stimulus Package does inspire an increase in construction activity, he suspects rental companies may be the first beneficiaries.

“That would be my guess,” says Simonson. “If they do win contracts they’ll either dust off the machinery they have parked, rent or buy used before they spend on some new fancy stuff which is probably going to impact the dealers and manufacturers. Then there’s also the question of whether they can thaw the credit market enough so that those looking to buy or lease can get some help.”

One of the common comments that came from many attendees at the recent World of Concrete show in Las Vegas was that they were ready to buy but there was a noticeable shortage of financing immediately available. Maybe that’s because there were too many golden, how about platinum, parachutes drifting across the banking world’s skies.