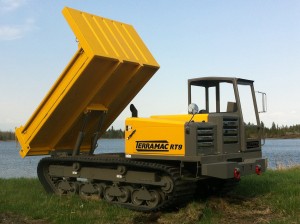 The CE certified Terramac RT9 model has an 18,000 pound carrying capacity and is equipped with a 230 hp Cummins diesel engine in both open cab and closed cab options. The unit has rollover protective structure (ROPS) as well as falling object protective structure (FOPS) components. Ground pressure when fully loaded is only 4.9 psi. The RT9’s easy front and rear bolt-on attachments can accommodate a variety of needs in the drilling and general construction industries.

Original Equipment Manufacturers (OEMs) as well as contractors can easily mount their own machines – cranes, drills, water tanks, and more – on Terramac crawler carriers. “We created the RT9 with customization as a top priority,” said Mike Crimaldi, president of Rig Source and one of the creators of the Terramac line. “The ability to mount a variety of machines is the RT9’s core differentiator and strength. Versatility was one of the features that Expo attendees rated as most important to them.”

The Terramac’s RT9 is powered by a 230 hp Cummins diesel engine. The engine’s reputation for power and reliability was seen as one more point in the RT9’s favor according to Matt Slater, Rig Source’s director of sales.

“Another well-received feature of the new carrier is the ease of maintenance that was built into the design of the RT9,” said Slater. “For example, cylinder mounts and front and rear attachment plates are all bolt-on for easy replacement. The pivot shaft blocks are also bolted on, rather than welded on.  We included cleanouts on the frame to simplify clearing mud and water from the frame rails as well. And those are just a few examples.”

The size of the display model was popular with the industry professionals in attendance. The Terramac RT9 has a 17 foot 7 inch overall length and is 8 feet 5 inches wide with a 9 foot 3 inch height and 20-inch minimum ground clearance. The unit’s travel speed is 4.7 to 7 mph. It has a 10-foot turning radius.

“I think a lot of our customers will really appreciate that these machines are manufactured in North America,” added Crimaldi. “Terramac’s goal is to deliver machines in a shorter lead-time than manufacturers in Asia.”

Asked about his plans for the Terramac RT9, Crimaldi responded that the formal launch of the Terramac line is planned for September at MINExpo in Las Vegas. “When we realized that the first two units would roll off the assembly line in time for the Expo in Timmins, we decided to give the market a look at the Terramac a few months early,” he said. “We will begin taking orders for the RT9 right away. Sales and manufacturing won’t wait for the formal launch. Customers that want a Terramac can order one now. Rentals are also available.”

Rig Source, the exclusive distributor of the new carrier, does extensive business overseas, and Crimaldi noted that the Terramac would be available for those customers as well. “We ship drill rigs all over the world,” he noted, “and we plan to do the same with the Terramac.”