Caterpillar showed eight machines and two new engines. I mentioned the 904H Wheel loader earlier in the week. The new Caterpillar 904H compact wheel loader comes standard with 52-net-horsepower and an operating weight of 9,900 pounds. It replaces the popular 904B.

Other machines shown at the World of Concrete include three D-Series mini hydraulic excavators. The 307D is a direct replacement for the 307C. The 308D CR, a compact radius machine designed to work in tight spaces, replaces the 308C CR. A new model, the 308D CR SB, combines the compact radius design with a swing boom for increased versatility.

The D-Series mini excavators retain the best features of the C-Series models while incorporating many improvements that increase productivity and reduce operating costs. The new mini excavators outperform their predecessors with 22 percent higher bucket forces and 10 percent higher stick forces. Lift capacity has been increased with the addition of a larger counterweight. A 15 percent increase in traction forces improves dozing and turning performance. Collectively, these enhancements make the D-Series models quick, powerful and efficient so work can be completed faster and more economically.

The new telehandlers incorporate load sensing hydraulics for superior lifting and digging forces and for the ability to operate all three boom functions simultaneously and proportionally. Smoother, logical control of the boom and work tool enables the operator to do more, more efficiently and more accurately. The new telehandlers also feature Z-bar linkage and greater breakout force for stronger digging performance compared to the previous models. 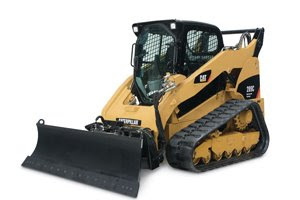 The new Caterpillar E-Series Backhoe Loaders—the 416E, 420E and 430E—replace the D-Series models. The 420E and 430E are the high performance machines in the new series. Both machines are offered in integrated toolcarrier configurations for applications that benefit from parallel-lift loader linkage and the versatility of quick work tool changes. 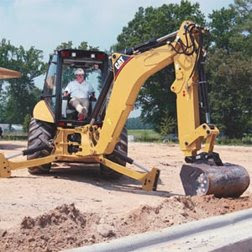 The 420E features a 14 percent increase in backhoe stick breakout force and is about 10 percent more productive than the previous model. The 430E features increased lifting and breakout forces. Swing forces are also increased. On the loader end, truck-loading performance is improved through pump torque limiter changes and improved balance of power distributed to the drive train and hydraulics.

Additional options include auxiliary crank pulleys, battery cables, bases and clutches making an IOPU an even more compact and versatile option for dealers and OEMS. Available in multiple engine ratings, the Industrial Open Power Units will be available for delivery in the first quarter of 2009.

I’ll give you more information on the other products that were introduced at the show as I get the information. If you have any questions, comments or suggestions, please use the comment section or contact me by e-mail. I look forward to hearing from you.