By now everyone has heard that the stimulus bill has passed the house without Republican support. The question is will it provide enough stimulation to “jump start” our failing economy.

It’s the hottest topic in the news and rightfully so because it should be the second serious attempt at getting the economy turned in a better direction. The first attempt last year – the Wall Street Bailout – hasn’t had much of an impact on stimulating the general economy although many believe that it provided some nice parachute packages for some top ranking executives.

There are legitimate concerns about the real value the stimulus package will really have. When you look at the allocation of funds it is difficult to see where the three or four million jobs will come from. A number of the infrastructure projects are in the multi-million dollar range but aren’t labor intensive. As you scroll down and look at the proposed spending – this is not the final “final” version of the bill as it has yet to be voted on by the Senate. Remember while you add the dollars up in your head that this is your money being spent.

Aid to poor and unemployed

•$40 billion to provide extended unemployment benefits through Dec. 31, and increase them by $25 a week; $20 billion to increase food-stamp benefits by 14%; $3 billion in temporary welfare payments.

•$21 billion to provide a 60% subsidy of health care insurance premiums for the unemployed under the COBRA program; $87 billion to help states with Medicaid; $19 billion to modernize health information technology systems; $10 billion for health research and construction of National Institutes of Health facilities.

•$5 billion in aid to states to use as they please to defray budget cuts.

•$4 billion in grants to state and local law enforcement to hire officers and purchase equipment.

•About $70 billion to spare about 24 million taxpayers from being hit with the alternative minimum tax in 2009. The change would save a family of four an average of $2,300.

•$3.7 billion to repeal a requirement that an $8,000 first-time home buyer tax credit be paid back over time for homes purchased from Jan. 1 to Aug. 31, unless the home is sold within three years.

•$5 billion to extend a provision allowing businesses buying equipment such as computers to speed up depreciation through 2009.

The total equals $396 billion allocated for spending. That’s a lot of money. But does it mean a lot of jobs?

To meet the needs of vocational truck customers looking for a lighter-weight and more nimble truck chassis, the International PayStar 5900 Set-Back Axle will now be available with 10-inch frame rails. 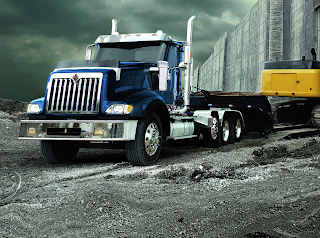 The smaller, lighter frame rail option will provide a distinct advantage for vocational tractor customers looking to take advantage of standardized trailer heights in straight dump, dump trailer and combination truck-trailer applications. In addition, for states with highly sensitive weight restrictions, the 10.25-inch frame rails could reduce total vehicle weight by as much as 90 pounds, providing customers with additional payload capacity, with a direct impact on the bottom line. 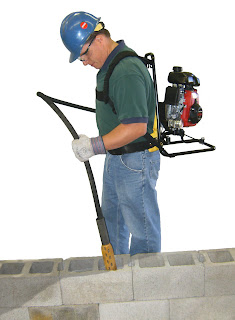 Stone Construction Equipment, Inc., has added a handheld vibrating power screed line to its concrete finishing offering – the Stone Screed Bull. Choose from two models – the heavy-duty professional contractor’s model, the VSB80, which handles boards to 16 feet yet weighs in at only 32 pounds. The lighter weight, rental-ready model, the VSB70 runs 12 feet boards with ease and weighs only 25 pounds. Both deliver optimum performance in 2 inch to 9 inch slumps. 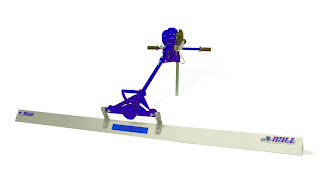 The power unit and the boards are perfectly matched for optimum screeding, allowing these screeds to easily operate in most slumps. No need for complicated eccentric adjustments to handle longer boards or stiffer slumps. The board uniformly carries and transmits the vibrations generated through the entire length of the board to precisely consolidate the concrete whether wet screeding or using forms.

The two models are both powered by 4-cycle Honda GX25 engines. Additional features include:

The patented screed boards are available in lengths from 4 feet to 16 feet. Two-foot extensions can be added to each end of the boards to extend to make custom lengths. Extension straps are also available to connect two power units and boards together to cover larger pours with the same efficiency.The handheld Screed Bull models join two other heavy-duty power screeds in Stone’s Right Built concrete finishing equipment lines.