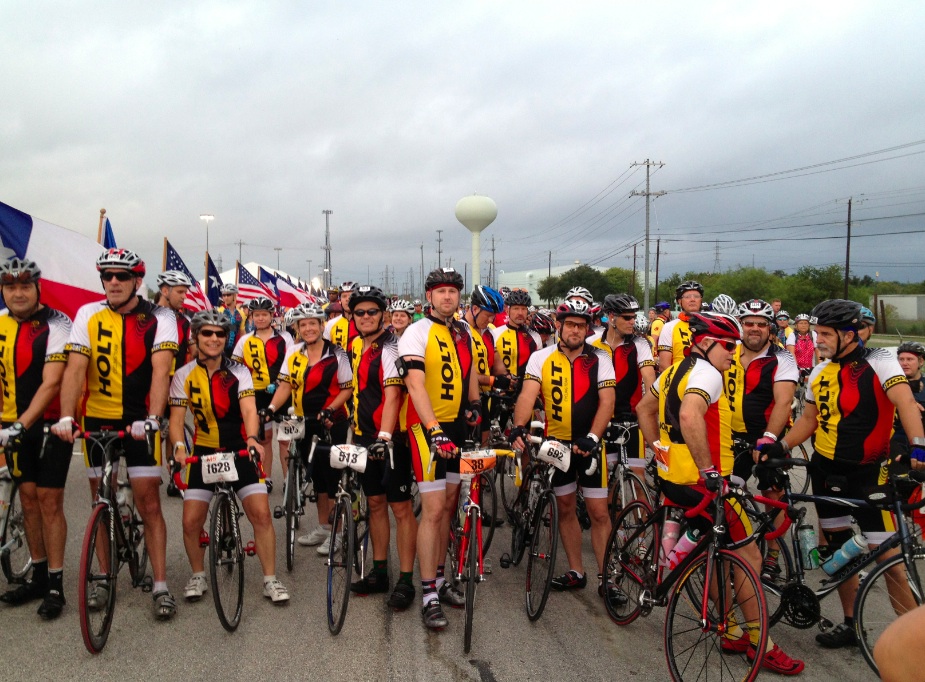 HOLT CAT® (www.holtcat.com), the Caterpillar® dealer for South, Central, North and East Texas showed its support for Multiple Sclerosis victims by participating in Bike MS: Valero 2012 Alamo Ride to the River onOctober 13-14, 2012. Members of the company have participated in this event for over 10 years.

The event entailed a 157-mile bike ride going from San Antonio to New Braunfels and back over the course of the weekend. HOLT’s 40 team members took on the challenge, coming together from numerous locations across Texas as well as one rider from Australia.

Together, these HOLT team members have raised $68,148.60 for Multiple Sclerosis as of October 17, 2012.  This amount is 90% of their team goal of $75,000 for the 2012 ride. They will be working to achieve the balance of their goal within the few remaining weeks of 2012.  This represents the highest amount of funds raised behind the title sponsor, Valero, and the highest in average fundraising per rider of all teams that participated.  TEAM HOLT CAT also has over 10 riders in the Top 100 fundraisers for the event, Club 100.

Team Captain Aaron Martinez stated, “We have fellow employees and friends and family who struggle with MS. This is what drives us to spend time training for the ride and raising funds to fight this debilitating disease. We have raised a record amount this year and will continue to push to meet our goal.”

If you are interested in donating with Team HOLT CAT in their fight against MS, please see more information here.

HOLT CAT sells, rents and services Caterpillar machines, engines, generator sets and trucks in a 118-county Texas territory spanning from the Red River to the Rio Grande.  HOLT offers total machine and engine rebuild capabilities, sells used equipment around the world and fabricates its own line of land clearing equipment and HOLT Spray King® water tankers. HOLT is the dealer for Link-Belt Cranes in the Eastern half of Texas as well as the El Paso area. They are the dealer for AGCO/Challenger and Claas farm equipment for the Eastern half of Texas and portions of Arkansas and Missouri. For more information visit: http://www.holtcat.com/