Terex Roadbuilding recently hosted two high-profile visitors at its Oklahoma City manufacturing facility in August. Terex Chairman and Chief Executive Officer, Ron DeFeo, made a visit to Oklahoma City to meet with team members and see first-hand the improvements made to the company’s manufacturing facility and customer support programs. Senator Jim Inhofe, (R-Oklahoma) and ranking member on the United States Senate Environment and Public Works Committee, also visited the facility to see the operations and discuss the future of highway project funding.

DeFeo conveyed to team members the strong commitment Terex has to the Oklahoma City facility. “We are investing money in Oklahoma City,” DeFeo said. “That’s why we brought more equipment production here,” referring to the recent transfer of paving and crushing equipment manufacturing from Cedar Rapids, Iowa, to Oklahoma City. 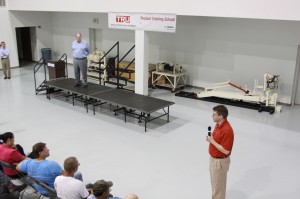 growing and investing in the Oklahoma City facility, which is home to the production of asphalt, concrete and crushing equipment. “This location meets all the criteria Terex wants in a manufacturing facility,” DeFeo said. He cited specifically Oklahoma City’s modern facility with room for expansion, central location for the United States market, and talented and dedicated workforce.

DeFeo’s enthusiasm for the future of Roadbuilding’s business was tempered only by the failure of Congress to pass a long-term comprehensive surface transportation bill. “Our future and more specifically this facility’s future depends on passage of a multi-year highway bill,” he said. He also urged Terex Roadbuilding team members to contact their members of Congress regarding this critical legislation.

On August 24, 2010, Terex hosted Senator Jim Inhofe at its Oklahoma City facility. In a meeting held between company 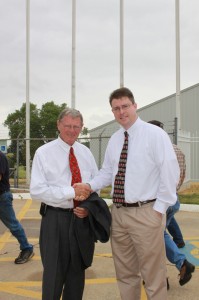 “We have seen our opportunities grow substantially outside of the United States, while the domestic market continues to languish without a comprehensive, multi-year highway bill,” Anderson told Inhofe. “The Stimulus provided a shot in the arm for our customers, which is good, but the manufacturers saw little economic benefit tied directly to the legislation.”

As Chairman of the Environment and Public Works Committee in 2005, Inhofe authored the SAFETEA-LU (Safe Accountable Flexible Efficient Transportation Equity Act: A Legacy for Users) Legislation, which expired on Sept. 30, 2009. The Senator has led efforts for reauthorization of the Highway Bill and for a long-term extension while the new bill is written.

“Even as the number-one-ranked conservative in the Senate, I’ve worked closely with Senator (Barbara) Boxer, (D) California, in a bi-partisan way to get highway funding,” Inhofe explained. “Congress has a responsibility to the American people for infrastructure development, construction and maintenance.”

Later, Senator Inhofe addressed a room full of Terex team members about his record in the Senate and his work to promote

infrastructure spending. He shared concerns that roughly a mere 4 percent of Stimulus spending went to transportation-related projects, and he acknowledged just how important reauthorizing the Highway Bill is to manufacturers like Terex. “If you don’t have a highway bill, you are in serious trouble,” he said.

Inhofe left the team on a note of optimism. “I’m going to do everything that I can to get a (multi-year) highway bill,” he said.