From the Texas Contractor Austin Bureau

bonds. John Barton, TxDOT assistant executive director of engineering operations, reports the agency had hoped to let approximately $4 billion in contracts annually. The projected volume does not include projects under Commercial Development Agreements (CDAs), which would be “above and beyond” the estimated totals.

CDAs Adding to the Pot

Observers have noted a change in highway lettings in recent months, with more CDAs being awarded in local lettings than in the statewide letting. Barton said work is being done not only under CDAs, but also for pass-through toll projects. Barton reported that the changes reflect new tools given to the agency by the Legislature, with the intention of bringing in more revenues for transportation projects, with local communities paying “a significant part” of the costs.

“We’re trying to do as much as we can to make our limited dollars go even further,” Barton said.

Approximately $650 million will be from CDAs over the next two years out of approximately $4 billion in funding for TxDOT, he reported. That represents 15 to 16 percent of the program, and will drop in percentage terms in future years because the Legislature has not provided authority for future operations. Most of the CDA work represents three agreements in the Dallas area. The majority of that work has contracted, Barton said, with “not a lot waiting to be executed.”

“Overall, it’s a small part of our program,” he added. However, leveraging $1.3 billion from three CDAs has allowed $7 billion of work to be done. Use of CDAs is “yet another option” for the department in attempting to meet the state’s transportation needs by performing construction work in different ways, Barton said. Many of the consortiums involve accessing financing, bond and consulting services that could be problematic for individual contractors to obtain.

Those consortiums “have come to Texas from other parts of the world to bid,” Barton added. “We are seeing them reaching out, so that there is quite a bit of diversity… and we see Texas companies participate.”

Barton also said he doesn’t believe the increased use of CDAs has hurt smaller contractors. Those projects typically are put together by a consortium, which acts as “more of a contract manager,” while “the vast majority of the actual construction” is done by contractors serving as subcontractors to the consortium.

TxDOT underwent “sunset” review in the 2009 Legislature, and is scheduled for another, although more limited, review in the 2011 session. Under the sunset process, lawmakers decide whether an agency should be continued, modified or abolished. 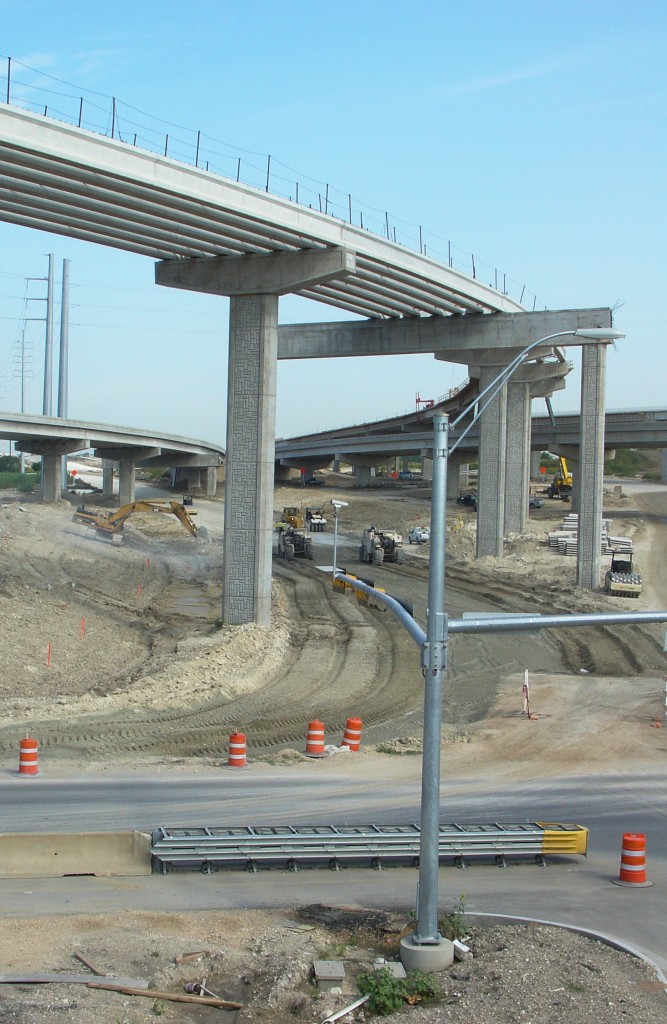 Partisan wrangling in the House of Representatives resulted in the TxDOT sunset legislation stalling in the regular session, but a special session in July provided for continuation of the agency until the next regular session. Barton said he doesn’t believe the additional sunset review will affect the department’s construction or maintenance programs, which he expects will continue to move forward. “The process should be beneficial in increasing the efficiency of TxDOT,” he added.

Barton reported he is confident the legislative debate in 2011 will include conversations regarding the agency’s funding, including how to bring in additional revenue resources. “Those conversations likely will focus on increases in motor fuel or sales taxes as a source of funds for TxDOT programs,” he said. “The discussions should help call more public attention to the agency’s needs and the urgency of upgrading and maintaining the state’s transportation infrastructure.”

Barton said that as a result of the sunset process, the department already has become “more open and transparent to companies and the public. We’ve worked hard on that. The department expects to continue making changes and improvement.”

Barton said the question of how the recently created Texas Department of Motor Vehicles will affect TxDOT’s funding remains unanswered at present.

Barton reported TxDOT was disappointed in the requirement to return $742 million in highway funds to the federal government, saying the rescission affected $103 million in reimbursement for fiscal year 2010. However, the requirement was not a surprise, he said: “We had planned for it.” The remaining $639 million of the rescission involved planning authority, which means some construction projects planned by the department won’t happen. According to Barton, “we won’t be able to do [them] because we don’t have the planning authority.”

TxDOT did receive a $700 million allocation of federal stimulus funds and is using proceeds from the so-called “Proposition 14” transportation bonds to help finance projects over the biennium. Barton said some regional toll revenues from the Dallas district for the Highway 121 project also will become available.

Meanwhile, Barton said, “we know our transportation needs are great.” The department has worked with the private sector, academic interests and legislators to determine what the needs will be by 2030 and how to go about meeting those needs, he reported. The consensus appears to be that Texas will need $14 billion per year in improvements to meet those needs and to keep road congestion from getting worse.

Congress has been considering a new transportation bill, and state legislative leaders also are looking at the issue, he noted. “The needs are quantified and are real,” Barton said, “but our ability to meet them is limited. We know we don’t have the ability to meet them.”

But Barton believes there will be “real opportunities” to start meeting those needs with support from the public and lawmakers. “I’m sure something positive will come out of the 2011 session,” he said. State and federal officials have been working on proposals that would raise motor fuel taxes, but action on the measures doesn’t appear imminent. The Texas State Legislature will not meet in regular session in 2010.

A report published earlier this year by Cambridge Systematics concludes that Texas will be $256 billion short of meeting its transportation needs if current funding formulas remain unchanged.

At a meeting in El Paso in November, Sen. John Carona, R-Dallas, warned that Texans may have to pay more when they fill up their vehicles’ gas tanks if they want new highways. Carona chairs the Senate Committee on Transportation and Homeland Security, and for the past several legislative sessions has advocated changing the state’s motor fuel tax structure to bring in additional income. Carona noted that the 20-cents-per-gallon tax has been the same since 1991, while the need for highways, and the cost of providing them, has been climbing.

“We are in the critical position in this state where we are growing and will need more roads. But we have no money to build them and no more debt that we can issue,” Carona commented. Under the current tax structure, Texas motorists pay 20 cents to the state and 18.4 cents to the federal government for every gallon of motor fuel they use. Of that 20 cents, 15 cents goes to highway construction and 5 cents goes to help fund public schools.

TxDOT Executive Director Amadeo Saenz reported motorists aren’t filling up their more fuel-efficient vehicles as often as they did previously, and hybrid vehicles also are reducing the amount of fuel taxes collected. If current trends continue, and if the Legislature decides not to increase motor fuel taxes, TxDOT may soon have sufficient funds to maintain only existing roads, according to Saenz.

Sen. Eliot Shapleigh, D-El Paso, a member of the Senate committee, has suggested cities and counties be given authority to levy a temporary local gasoline tax to be used for specific transportation projects. Rep. Joe Pickett, D-El Paso, who chairs the House Transportation Committee, reported he believes there is bipartisan support for increasing the tax.

“With all the work going on in North Texas, we are the envy of the nation,” said Mark Tomlinson. “With three CDAs (Commercial Development Agreements) starting up at the same time in the Dallas/Fort Worth area later in 2010, the main challenges are going to be suppliers, equipment and workers.” The North Texas projects have been organized by the North Central Texas Council of Governments (NCTCOG), The North Texas Tollway Authority (NTTA), and Dallas Area Rapid Transit (DART) in cooperation with TxDOT.

The North Tarrant Express will be built with two CDAs. The first will develop 13 miles along I-820 and SH 121/SH 183 from I-35W to SH 121. The CDA for Segments 2-4 includes developing master plans for the remainder of the corridors along SH 183 from SH 121 to SH 161, I-820 east from SH 121/SH 183 south to Randol Mill Road, and along I-35W from I-30 to SH 170 in Tarrant and Dallas counties. The two CDAs, with an estimated cost of $5 billion for the entire 36-mile corridor, were awarded to NTE Mobility Partners, with Cintra, Concesiones de Infraestructuras de Transporte, S.A. and Meridiam Infrastructure SICAR as equity members.

The reconstruction in North Dallas of 13 miles of Interstate Highway I-635 (LBJ) from just west of I-35E to just east of United States Highway (US) 75 and south on I-35E from I-635 to Loop 12 was awarded to the LBJ Infrastructure Group, with Cintra, Concesiones de Infraestructuras de Transporte, S.A as the equity owner.

The estimated $1.02 billion DFW Connector, also known as the Grapevine Funnel project, will expand the congested area of State Highways 121 and 114 north of DFW Airport. This CDA was awarded to NorthGate Constructors JV, with Kiewit Texas Construction L.P. and Zachry Construction Corporation as Equity Owners.

The Central Texas Regional Mobility Authority awarded two projects in December, with the low bids for both coming in well below the engineer’s estimate. The first phase of the 6.2-mile Manor Expressway/ US 290 East is the largest transportation project in Central Texas to be funded by the federal stimulus bill. The 183A Northern Extension is being constructed more than seven years ahead of schedule and will extend the existing 183A toll road an additional five miles to the city of Leander.

Another ARRA-funded project is scheduled to be awarded this month by the Alamo Regional Mobility Authority (Alamo RMA) after receiving direction from the Federal Highway Administration (FHWA) to proceed with a Categorical Exclusion and construct the US 281 Super Street project. The Alamo RMA is also moving forward on an Environmental Impact Statement for another ARRA project to construct four non-toll direct connectors between US 281 and Loop 1604 on the north side of San Antonio. The Alamo RMA has received $140 Million from the Federal Stimulus program for this project. For the long term the Alamo RMA is studying improvements to IH-35 from downtown San Antonio to the Bexar/Guadalupe County Line, about 16 miles to the northeast.

The Harris County Toll Road Authority plans to open bids in early 2010 for contracts to widen the Sam Houston Tollway South Belt between US 59 south and State Highway 288.

The North East Texas Regional Mobility Authority (NET RMA) will soon be awarding a contract for their Toll 49 Segment 3B project through a Design/Build CDA to one of four firms on their short list. Toll 49, a proposed corridor in Northeast Texas connecting Tyler, Longview and Marshall, is the NET RMA’s top-priority project. Other NET RMA priority projects in various stages of planning or construction include US 59 Spur north of Marshall; the George Richey Road Expansion in Longview; State Highway 149 widening south of I-20; the Texarkana West Loop; Loop 571 in Henderson; and I-20 Express Lanes from Terrell to the Texas/Louisiana border in conjunction with a proposed passenger rail line serving the same distance.

The Grayson County Regional Mobility Authority (www.co.grayson.tx.us/gcrma.htm), along with the Paris District of TxDOT, hopes to begin working with a consulting firm this month on plans for the Grayson County Tollway, which would serve as a northeast-to-southwest bypass of Sherman and Denison.

As TxDOT funds have felt the economic pinch over the past couple of years, RMAs have brought different funding into the picture as they promise to accelerate new road construction in our growing metropolitan areas.