Texas’ extensive system of roads, highways and bridges provides the state’s residents, visitors and businesses with a high level of mobility. This transportation system forms the backbone that supports the state’s economy. Texas’ surface transportation system enables the state’s residents and visitors to travel to work and school, visit family and friends, and frequent tourist and recreation attractions while providing its businesses with reliable access to customers, materials, suppliers and employees.

As Texas looks to retain its businesses, maintain its level of economic competitiveness and achieve further economic growth, the state will need to maintain and modernize its roads, highways and bridges by improving the physical condition of its transportation network and enhancing the system’s ability to provide efficient and reliable mobility for motorists and businesses.  Making needed improvements to Texas’ roads, highways and bridges could also provide a significant boost to the state’s economy by creating jobs in the short term and stimulating long term economic growth as a result of enhanced mobility and access.

With a current unemployment rate of 5.1 percent and with the state’s population continuing to grow, Texas must improve its system of roads, highways and bridges to foster economic growth and keep businesses in the state. In addition to economic growth, transportation improvements are needed to ensure safe, reliable mobility and quality of life for all Texans.  Meeting Texas’ need to modernize and maintain its system of roads, highways and bridges will require a significant boost in local, state and federal funding.

Signed into law in July 2012, MAP-21(Moving Ahead for Progress in the 21st Century Act), has improved several procedures that in the past had delayed projects, MAP-21 does not address long-term funding challenges facing the federal surface transportation program.

The impact of inadequate federal surface transportation revenues could be felt as early as August, when the balance in the Highway Account of the federal Highway Trust Fund is expected to drop below $1 billion, which will trigger delays in the federal reimbursement to states for road, highway and bridge projects.  States are expected to respond to this delay in federal reimbursement for road, highway and bridge repairs and improvements by delaying or postponing numerous projects.

As a further result, nationwide federal funding for highways will be cut by almost 100 percent from the current investment level for the fiscal year starting on October 1, 2014 (FY 2015) unless Congress provides additional transportation revenues.  This is due to a cash shortfall in the Highway Trust Fund as projected by the Congressional Budget Office. 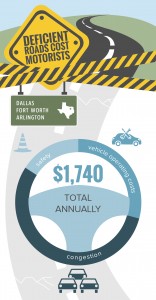 The level of funding and the provisions of the federal surface transportation program have a significant impact on highway and bridge conditions, roadway safety, transit service, quality of life and economic development opportunities in Texas.

Population and economic growth in Texas have resulted in increased demands on the state’s major roads and highways, leading to increased wear and tear on the transportation system.

A lack of adequate state and local funding has resulted in sixteen percent of major locally and state-maintained urban roads and highways in Texas having pavement surfaces in poor condition, providing a rough ride and costing motorist in the form of additional vehicle operating costs. 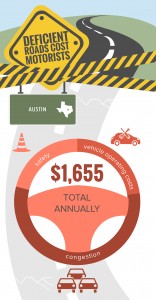 Nineteen percent of locally and state-maintained bridges in Texas show significant deterioration or do not meet current design standards often because of narrow lanes, inadequate clearances or poor alignment. This includes all bridges that are 20 feet or more in length.

Texas’ traffic fatality rate is significantly higher than the national average.  Improving safety features on Texas’ roads and highways would likely result in a decrease in the state’s traffic fatalities and serious crashes. It is estimated that roadway features are likely a contributing factor in approximately one-third of all fatal and serious traffic crashes.

Increasing levels of traffic congestion cause significant delays in Texas, particularly in its larger urban areas, choking commuting and commerce. Traffic congestion robs commuters of time and money and imposes increased costs on businesses, shippers and manufacturers, which are often passed along to the consumer. 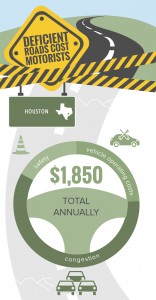 The efficiency of Texas’ transportation system, particularly its highways, is critical to the health of the state’s economy.  Businesses are increasingly reliant on an efficient and dependable transportation system to move products and services. A key component in business efficiency and success is the level and ease of access to customers, markets, materials and workers.

The federal government is a critical source of funding for Texas’ roads, highways and bridges and provides a significant return to Texas in road and bridge funding based on the revenue 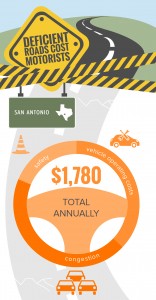 generated in the state by the federal motor fuel tax.