America’s rural heartland is home to nearly 50 million people, and its natural resources provide the energy, food and fiber that support the nation’s economy and way of life. But, a new report finds that the nation’s rural transportation system, which is critical to the nation’s booming agriculture, energy and tourism sectors, is in need of modernization to address deficient roads and bridges, high crash rates and inadequate connectivity and capacity. The report, “Rural Connections: Challenges and Opportunities in America’s Heartland,” was released today by TRIP, a national non-profit transportation research group based in Washington, D.C. It defines Rural America as counties that lack an urban area of at least 50,000 in population or lack a large commuting flow to an urban county. 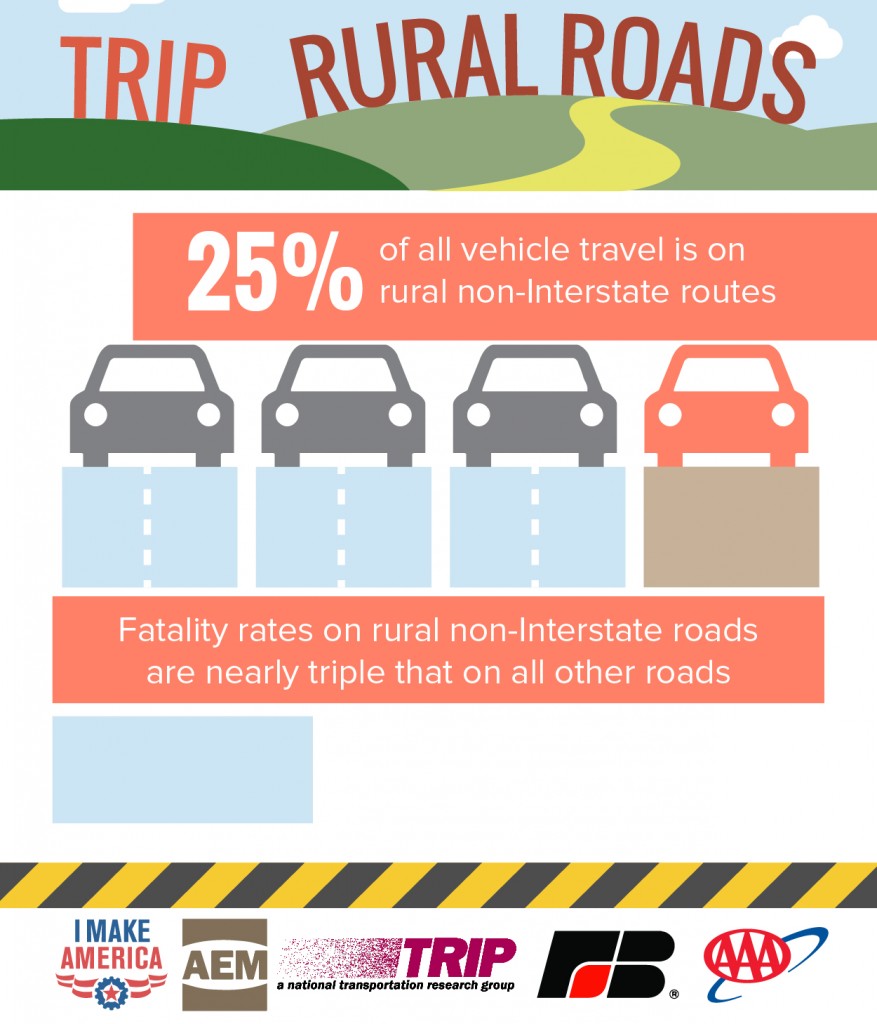 The TRIP report finds that traffic crashes and fatalities on rural roads are disproportionately high, occurring at a rate nearly three times higher than all other roads. In2012, non-Interstate rural roads had a traffic fatality rate of 2.21 deaths for every 100 million vehicle miles of travel, compared to a fatality rate on all other roads of 0.78 deaths per 100 million vehicle miles of travel. Rural traffic fatality rates remain stubbornly high, despite a substantial decrease in the number of overall fatalities.

“More than 46 million Americans live in rural and less densely populated areas of the country where their primary mode of transportation is a personal vehicle,” stated Kathleen Bower, AAA Vice President, Public Affairs. “Motorists expect and deserve safe, well maintained roads and bridges no matter if they are traveling on the Interstates or rural roads. Congress must act quickly to provide a sustainable solution for the federal Highway Trust Fund to ensure that states can continue to make necessary infrastructure investments that will benefit all travelers.” 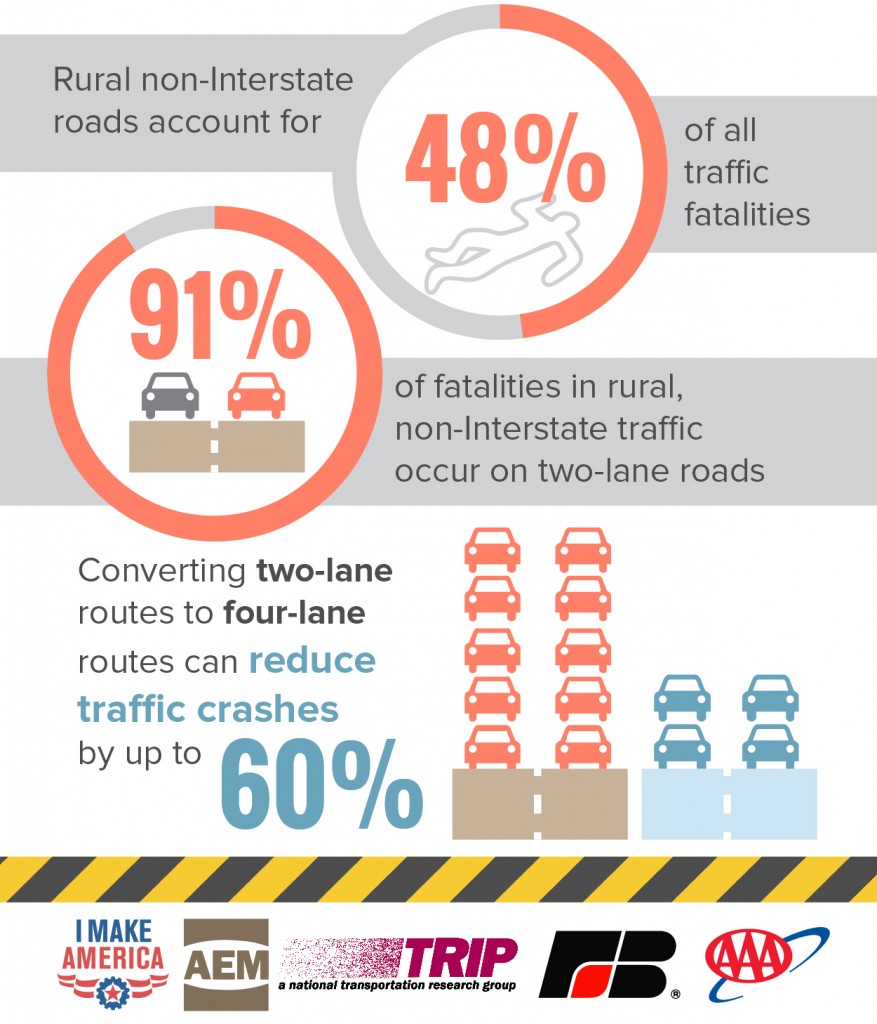 “America’s rural transportation system is an integral component to the success and quality of life for U.S. farmers and ranchers,” said Bob Stallman, president of the American Farm Bureau Federation. “Adequate roads and bridges are necessary to deliver our agricultural bounty to markets at home and abroad. As we see additional growth and opportunities in rural America, we must work together to take advantage of those opportunities and to ensure that infrastructure supports and enhances our rural communities.” 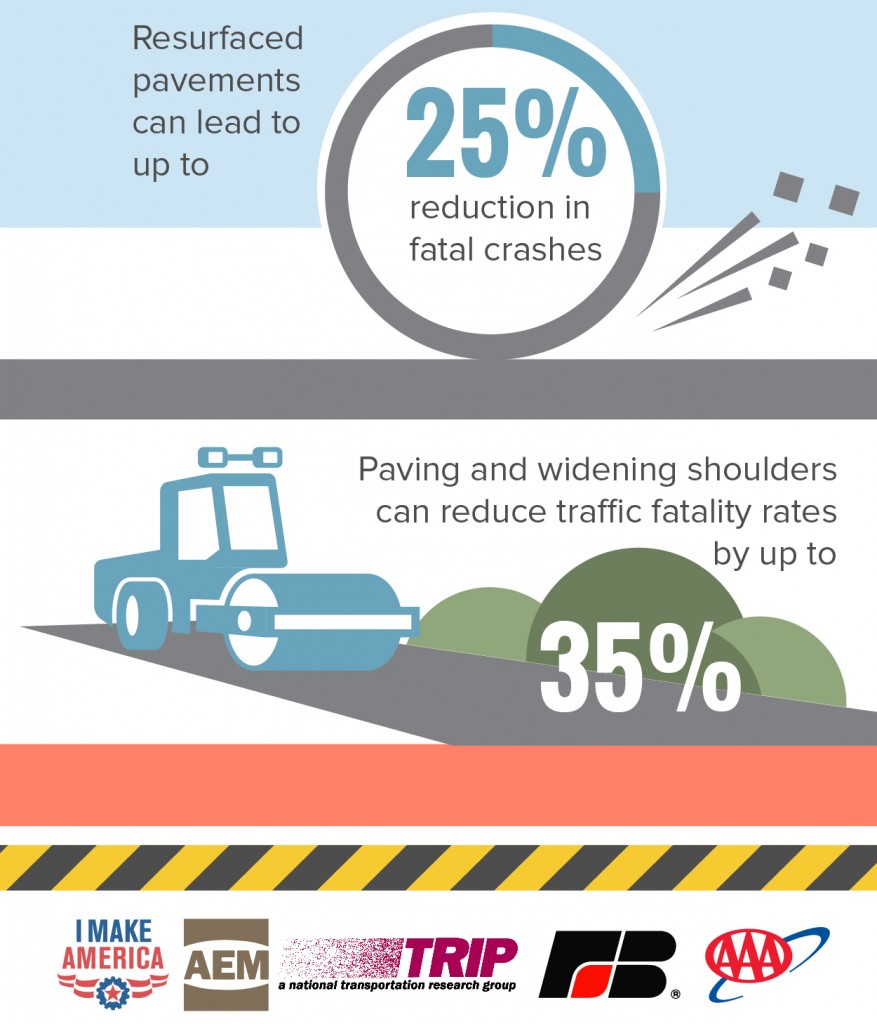 The report also finds that the development of major new oil and gas fields in numerous areas as well as increased agricultural production are placing significantly increased traffic loads by large trucks on non-Interstate rural roads, which often have not been constructed to carry such high load volumes. The average travel per-lane mile by large trucks on major, non-arterial rural roads in the U.S. has increased by 16 percent from 2000 to 2012.

The federal surface transportation program is a critical source of funding for rural roads. But a lack of adequate funding of the federal program may result in a significant cut in federal funding for the country’s roads, highways and bridges. The impact of inadequate federal surface transportation revenues could be felt as early as this summer, when the balance in the Highway Account of the federal Highway Trust Fund is expected to drop below $1 billion, which will trigger delays in the federal reimbursement to states for road, highway and bridge projects, which would likely result in states delaying numerous projects.

“So many of our industry’s manufacturing facilities and their workers are located in rural America, where they depend on safe and efficient roads for their livelihoods,” said Rick Patek, group president of Astec Industries and 2014 chairman of the Association of Equipment Manufacturers (AEM). “As Congress weighs how to extend the Highway Trust Fund, they would be well-advised to read this report and consider the effects of their actions on rural roads.” 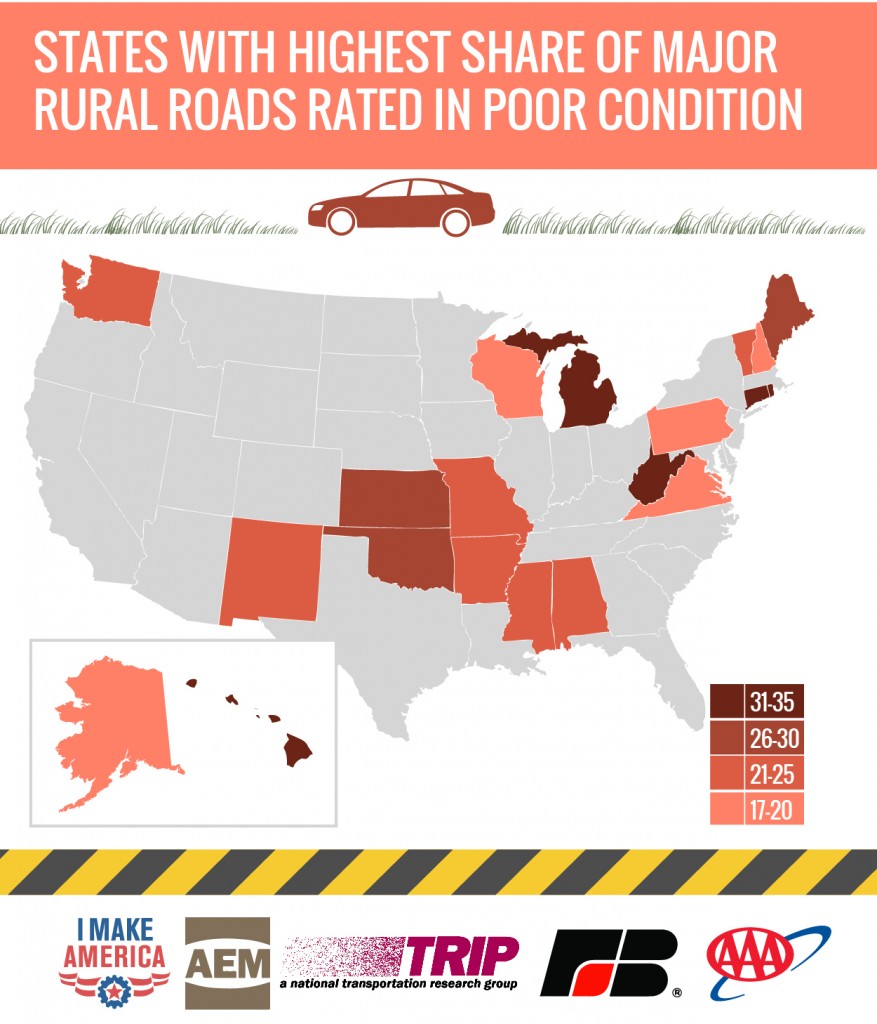 Nationwide federal funding for highways is expected to be cut by almost 100 percent from the current investment level for the fiscal year starting October 1, 2014 (FY 2015) unless Congress provides additional transportation revenues. This is due to a cash shortfall in the Highway Trust Fund as projected by the Congressional Budget Office.

The TRIP report finds that the U.S. needs to adopt transportation policies that will improve rural transportation connectivity, safety and conditions to provide the nation’s small communities and rural areas with safe and efficient access to support quality of life and enhance economic productivity. To accomplish this, the report recommends modernizing and extending key routes to accommodate personal and commercial travel, implementing needed roadway safety improvements, improving public transit access to rural areas, and adequately funding the preservation and maintenance of rural transportation assets. 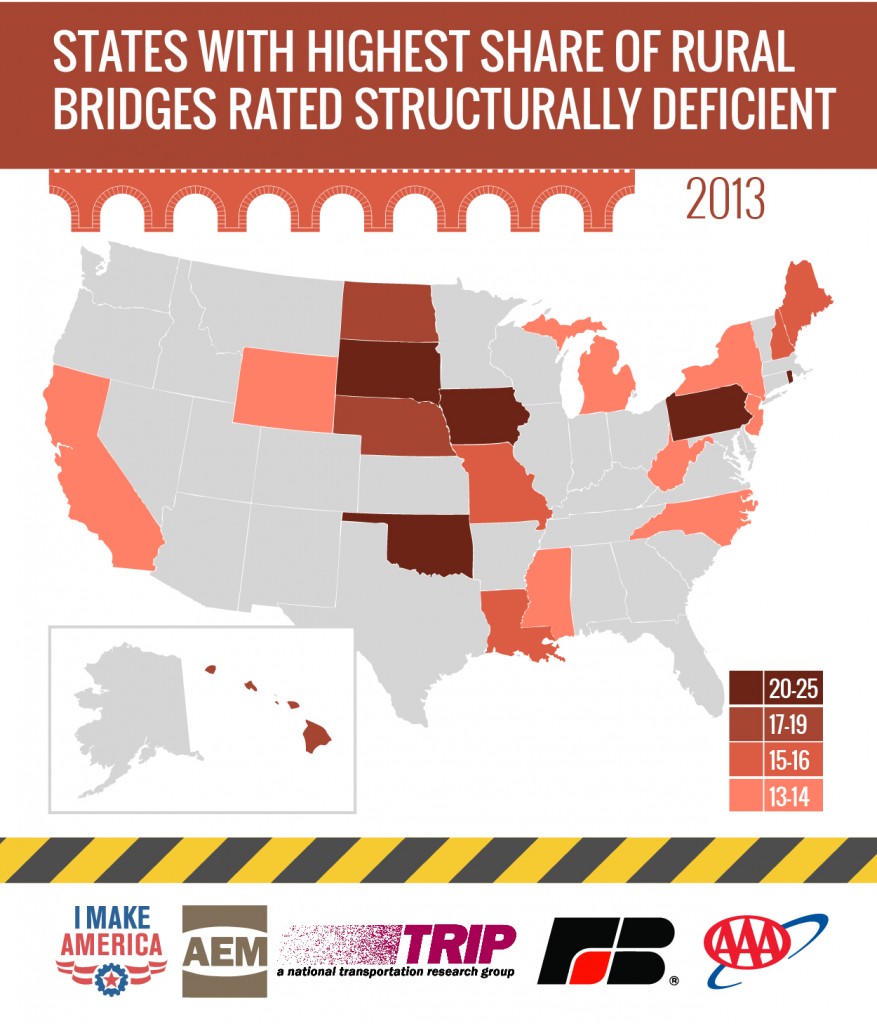 “The safety and quality of life in America’s small communities and rural areas and the health of the nation’s economy ride on our rural transportation system,” said Will Wilkins, executive director of TRIP. “This backbone of the heartland allows mobility and connectivity for millions of rural Americans. The nation’s rural roads provide crucial links from farm to market, move manufactured and energy products, and provide access to countless tourist and recreational destinations. But, with long-term federal transportation legislation stuck in political gridlock in Washington, America’s rural communities and economies could face even higher unemployment and decline. Funding the modernization of our rural transportation system will create jobs and help ensure long-term economic development and quality of life in rural America.”

Rural Roads Report Appendix A | 07/10/2014 Urban Areas with Populations Over 50,000 with No Direct Access to Interstates