North Carolina’s current level of transportation funding will not be enough to make needed improvements to the state’s transportation system to accommodate current and future levels of population, travel and economic growth. This is according to a new report by TRIP, a Washington, DC based national transportation organization. Over the next decade, the North Carolina Department of Transportation (NCDOT) will have funds available for only 17 percent of needed transportation projects.

The TRIP report, “Keeping North Carolina Mobile: Progress and Challenges in Providing an Efficient, Safe and Well-Maintained Transportation System,” examines road and bridge conditions, travel trends, economic development, highway safety and transportation funding. Since 2000, the state’s population has grown 26 percent and is projected to increase another 20 percent by 2035. Vehicle miles of travel (VMT) in North Carolina increased 29 percent from 2000 to 2016 — the ninth highest rate of growth nationally. And, from just 2013 to 2016, VMT in North Carolina has increased by 10 percent. VMT in North Carolina is projected to increase another 25 percent by 2030.

Eighteen percent of North Carolina’s major locally and state-maintained urban roads and highways have pavements in poor condition and 26 percent are rated in mediocre condition. Twenty-two 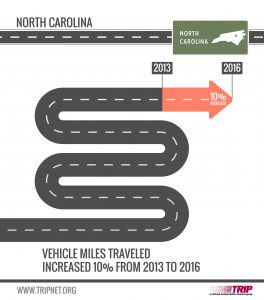 percent of the state’s major urban roads are rated in fair condition and the remaining 34 percent are rated in good condition. Long-term repair costs increase significantly when road and bridge maintenance is deferred, as road and bridge deterioration accelerates later in the service life of a transportation facility and requires more costly repairs. Every $1 of deferred maintenance on roads and bridges costs an additional $4 to $5 in needed future repairs.

Ten percent of North Carolina’s bridges are structurally deficient, meaning there is significant deterioration to the major components of the bridge.

“North Carolina has consistently topped the charts as one of the most competitive states for business. That has not happened by accident,” said Lew Ebert, president and CEO of the North Carolina Chamber. “Our state’s leaders have been busy investing in our transportation network to meet the current and growing demands of a dynamic state economy. However, to retain current investments and attract new jobs, investments and expansions, North Carolina leaders must continue to find ways to diversify our revenue streams in order to fund the network for the future.”

Progress and Challenges in Providing an Efficient, Safe and Well-Maintained Transportation System

An efficient, safe and well-maintained transportation system is critical to a region’s economic growth and quality of life. North Carolina has taken positive steps in increasing the level and effectiveness of its transportation investment, but must go further to ensure that the Tar Heel State gains the benefit of a modern 21st Century transportation system. 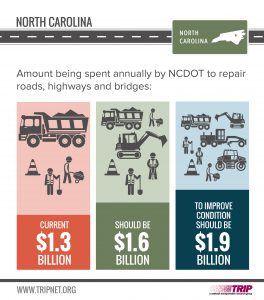 North Carolina’s transportation system provides economic and social benefits by affording individuals access to employment, housing, healthcare, education, goods and services, recreation, entertainment, family, and social activities. It also provides businesses with access to suppliers, markets and employees, all critical to a business’ level of productivity and ability to expand. Reduced accessibility and mobility – as a result of traffic congestion, a lack of adequate capacity, or deteriorated roads, highways, bridges and transit facilities – diminishes a region’s quality of life by reducing economic productivity and limiting opportunities for economic, health or social transactions and activities. 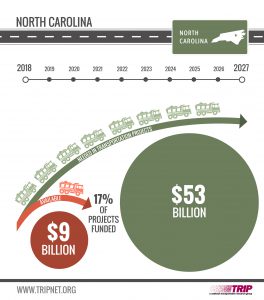 While 2015 legislation provided a modest increase in state transportation funding and legislation approved in 2013 improved project selection criteria to insure that the most needed projects are funded, the state faces significant challenges in providing a safe, well-maintained transportation system in North Carolina.

A lack of adequate state and local funding has resulted in 44 percent of locally and state-maintained urban roads in North Carolina having pavement surfaces in poor or mediocre condition, providing a rough ride and costing motorist in the form of additional vehicle operating costs.

Increasing levels of traffic congestion cause significant delays in North Carolina, particularly in the state’s larger urban areas, choking commuting and commerce. Traffic congestion robs commuters of time and money and imposes increased costs on businesses, shippers and manufacturers, which are often passed along to the consumer.

One in ten locally and state-maintained bridges in North Carolina show significant deterioration and are in need of repair. This includes all bridges that are 20 feet or more in length.

The efficiency of North Carolina’s transportation system, particularly its highways, is critical to the state’s economy. Businesses are increasingly reliant on an efficient and reliable transportation system to move products and services. A key component in business efficiency and success is the level and ease of access to customers, markets, materials and workers. 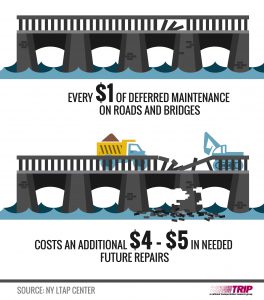