…TO IMPROVE CONDITIONS, RELIEVE CONGESTION AND REDUCE COSTS TO MOTORISTS OF DRIVING ON CONGESTED, DEFICIENT ROADS

While increased transportation funding provided by Michigan’s 2015 road funding package has allowed many projects to proceed throughout the state, additional investment is needed to complete numerous projects that would improve Michigan’s road and bridge conditions, relieve traffic congestion, and enhance traffic safety and efficiency. This isaccording to a new report from TRIP, a national transportation research nonprofit based in Washington, DC. 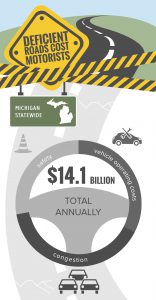 Passage of the 2015 road funding package will increase state funding for local roads and bridges, state roads and bridges, and transit from $2.2 billion in 2015 to nearly $3.7 billion in 2023. The additional transportation funding has allowed the state to move forward with numerous projects that otherwise may have remained unfunded, though many projects across the state will not move forward without additional transportation funding. The TRIP report includes a list of projects across the state that are either underway or will be underway or completed no later than 2023, and a list of projects that currently lack adequate funding to proceed.

“The TRIP data confirms what we’ve been saying for some time: Michigan’s roads and bridges are crumbling because of decades of under investment,” said Michigan Department of Transportation Chief Operating Officer and Chief Engineer Tony Kratofil. “Ensuring safe and efficient travel is our top priority, and these findings demonstrate the challenges we face fulfilling our mission.”

Statewide, 11 percent (1,175 of 11,180) of bridges are structurally deficient, meaning there is significant deterioration to the major components of the bridge. Forty-three percent of Michigan’s bridges (4,815 of 11,180) were built in 1969 or earlier.  Bridges 50 years or older often require significant rehabilitation or replacement. 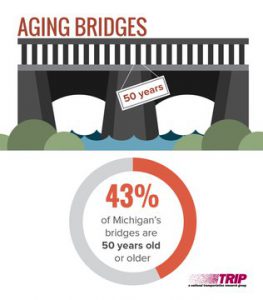 Improving safety features on Michigan’s roads and highways would likely result in a decrease in the number of traffic fatalities and serious crashes. A total of 4,905 people were killed in Michigan in traffic crashes from 2013 to 2017, an average of 981 fatalities per year. Traffic crashes in which roadway design was likely a contributing factor cost Michigan drivers $3.9 billion annually in the form of lost household and workplace productivity, insurance and other financial costs.

The efficiency and condition of Michigan’s transportation system, particularly its highways, is critical to the health of the state’s economy.  Annually, $1 trillion in goods are shipped to, from and within sites in Michigan, relying heavily on the state’s network of roads and bridges. Increasingly, companies are looking at the quality of a region’s transportation system when deciding where to re-locate or expand. Regions with congested or poorly maintained roads may see businesses relocate to areas with a smoother, more efficient and more modern transportation system.

“While the recent influx of funding has allowed Michigan to make strides in improving its transportation system, more work still needs to be done to provide the state’s residents, businesses and visitors with a smooth, safe and efficient transportation system,” said Will Wilkins, TRIP’s executive director. “Michigan will need to continue to make transportation investment a top priority.”

A decade after suffering a significant economic downturn, Michigan is recovering, with its population and economy growing and vehicle travel increasing in response to the growth.  But the state’s rate of recovery could be slowed if Michigan is not able to provide a modern, well-maintained transportation system. The pace of economic growth, which will be greatly impacted by the reliability and condition of the state’s transportation system, continues to have a significant impact on quality of life in the Great Lakes State. 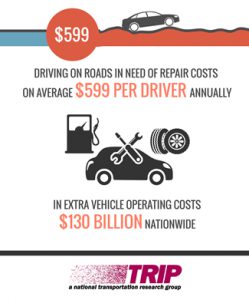 In late 2015, Michigan’s governor signed into law a transportation funding package that relies on a combination of increased user fees, registration fees and general funds. While this increased funding will allow the state and local governments to move forward with numerous projects to repair and improve portions of the state’s transportation system, the funding is not sufficient to fully address the significant deterioration of the system, or to allow the state to provide many of the transportation improvements needed to support economic growth.

THE COST TO MICHIGAN MOTORISTS OF DEFICIENT ROADS 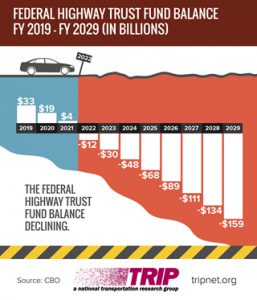 Driving on Michigan’s transportation system costs the state’s motorists a total of $14.1 billion every year in the form of additional vehicle operating costs (VOC), congestion-related delays and traffic crashes. 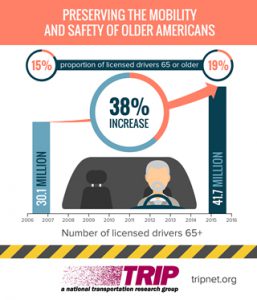 Additional transportation funding provided by the state legislature in 2015 will allow MDOT to complete numerous needed projects throughout the state. While the additional dollars have been helpful, many needed projects still remain unfunded.

In late 2015, Michigan’s governor signed into law a road funding package that relies on a combination of increased user fees, such as gas taxes and registration fees, and allocations from the General Fund. 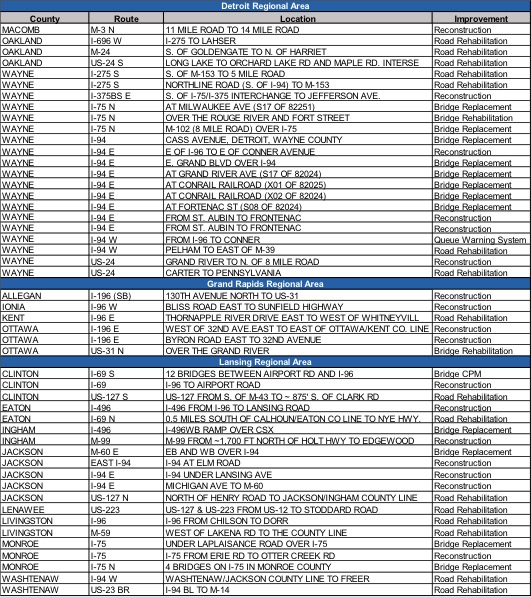 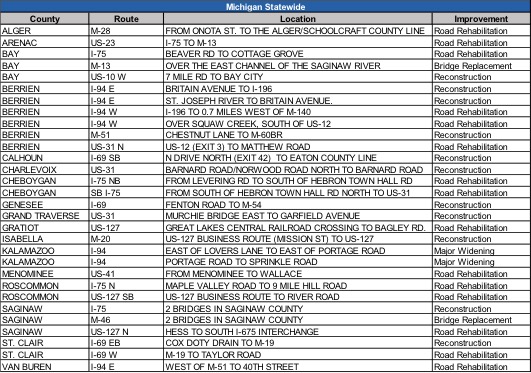 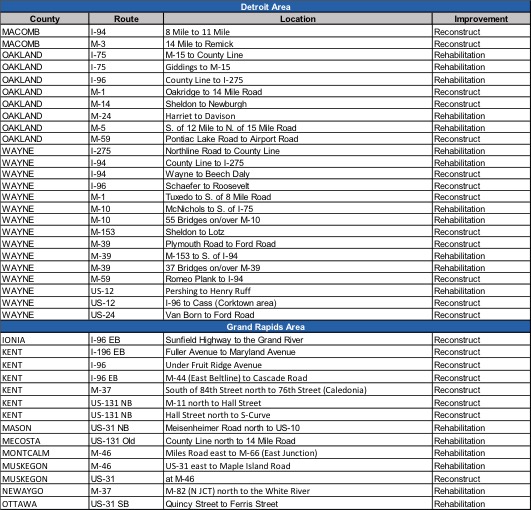 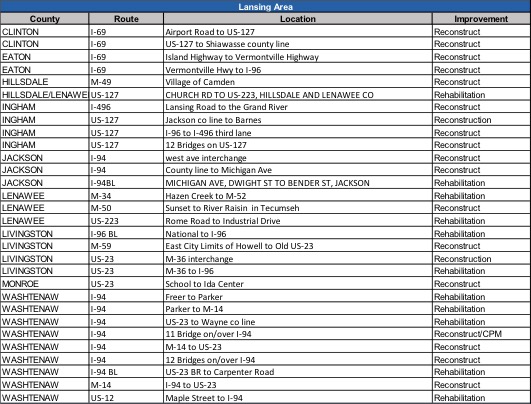 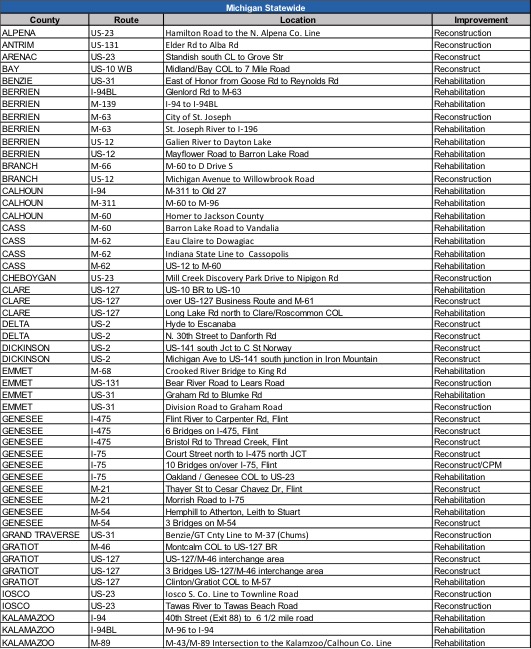 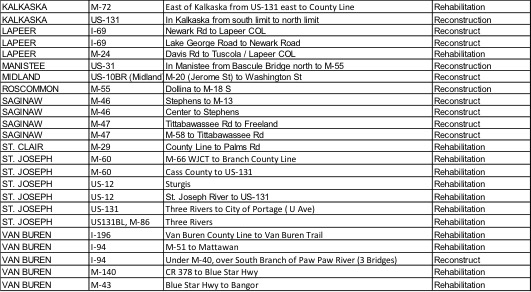 The share of Michigan’s major roads with pavements in poor condition has increased due to a lack of adequate state and local funding, providing a rough ride and costing motorists in the form of additional vehicle operating costs.

One-in-nine locally and state-maintained bridges in Michigan show significant deterioration and are rated structurally deficient. This includes all bridges that are 20 feet or more in length.

Increasing levels of traffic congestion cause significant delays in Michigan, particularly in larger urban areas, choking commuting and commerce. Traffic congestion robs commuters of time and money and imposes increased costs on businesses, shippers and manufacturers, which are often passed along to the consumer. 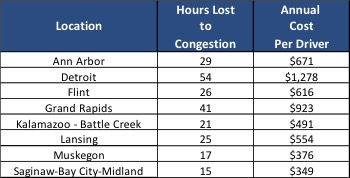 Improving safety features on Michigan’s roads and highways would likely result in a decrease in the number of traffic fatalities and serious crashes. 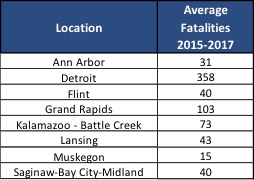 The current federal surface transportation program, which expires in 2020, falls far short of providing the level of funding needed to meet the nation’s highway and transit needs. Boosting federal surface transportation spending will require that Congress provide a long-term and sustainable source of funding to support the federal Highway Trust Fund.

The efficiency of Michigan’s transportation system, particularly its highways, is critical to the state’s economy.  A key component in business efficiency and success is the level and ease of access to customers, markets, materials and workers.  The design, construction and maintenance of infrastructure in Michigan is a significant source of employment in the state.

As Michigan works to continue its economic recovery and build a thriving, growing and dynamic state, it will be critical that the state is able to address its most significant transportation issues by providing a well-maintained 21st century network of roads, highways, bridges and transit that can accommodate the mobility demands of a modern society.

Michigan will need to modernize its surface transportation system by improving the physical condition of its transportation network and enhancing the system’s ability to provide efficient, safe and reliable mobility for residents, visitors and businesses.  Making needed improvements to the state’s roads, highways, bridges and transit systems could provide a significant boost to the economy by creating jobs in the short term and stimulating long-term economic growth as a result of enhanced mobility and access.

While the funding increase provided in 2015 will be helpful, Michigan  still faces significant challenges in improving the condition of its  roads and bridges and numerous projects to improve the condition and expand the capacity of Michigan’s roads, highways, bridges and transit systems will not be able to proceed without a substantial boost in state or local transportation funding.  If Michigan is unable to complete needed transportation projects it will hamper the state’s ability to improve the condition and efficiency of its transportation system or enhance economic development opportunities and quality of life.