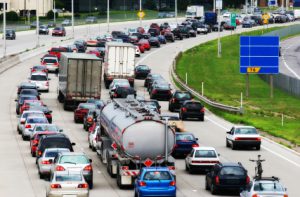 More than 300 Connecticut bridges (20 feet or longer), carrying 4.3 million vehicles daily, are structurally deficient, according to a new report recently released by 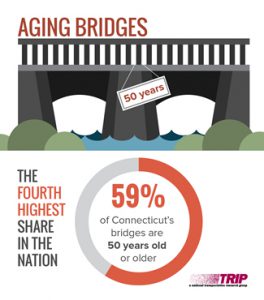 TRIP, a Washington, DC based national transportation research group. A bridge is structurally deficient if there is significant deterioration of the bridge deck, supports or other major components.

The TRIP report, “Preserving Connecticut’s Bridges: The Condition and Funding Needs of Connecticut’s Aging Bridge System,” finds that 308 of Connecticut’s 4,254 bridges are structurally deficient. Structurally deficient bridges may be posted for lower weight limits or closed if their condition warrants such action. Deteriorated bridges can have a significant impact on daily life. Restrictions on vehicle weight may cause many vehicles – especially emergency vehicles, commercial trucks, school buses and farm equipment – to use alternate routes to avoid weight-restricted bridges. Redirected trips also lengthen travel time, waste fuel and reduce the efficiency of the local economy.

The chart below details the five most heavily traveled structurally deficient bridges (carrying at least 500 vehicles per day) in each Connecticut county. A list of up to 25 of the most heavily traveled structurally deficient bridges in each county is included in the report’s appendix. The appendix includes the individual ratings for each bridge’s deck, superstructure , nd substructure. 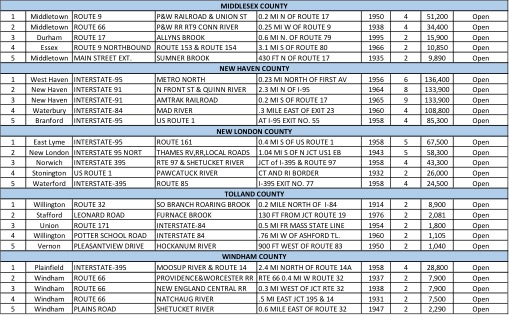 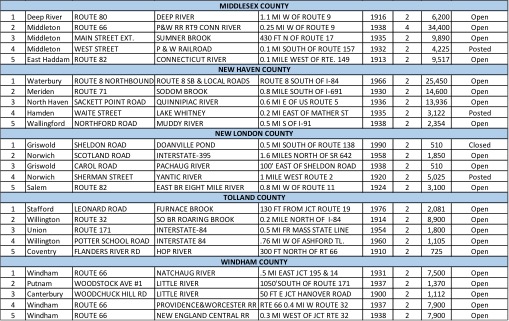 “Our outdated, outmoded and potentially dangerous bridges and other structures desperately need robust federal investment,” said Senator Richard Blumenthal (D-CT). “The time for talk is over. Action is needed now.” 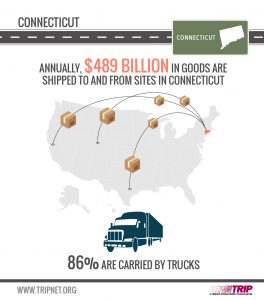 “In our ongoing efforts to advocate for the safety of everyone who uses our roadways, AAA encourages lawmakers to act in the best interest of commuters across Connecticut by providing and protecting the funds necessary to repair, maintain or replace our bridges as needed,” says Amy Parmenter, spokesperson for AAA in Greater Hartford. “The idea of our bridges being structurally deficient is not intended to frighten people. It’s intended to underscore the importance of investing in our infrastructure before it’s too late.”

A significant number of Connecticut’s bridges were built from the 1950s through the 1970s and have surpassed or are approaching 50 years old, which is typically the intended design life for bridges built during this era. Fifty-nine percent of the state’s bridges are 50 years or older, the fourth highest share in the U.S. The average age of all of Connecticut’s bridges is 53 years, while the average age of the state’s more than 300 structurally deficient bridges is 69 years. The cost of repairing and preserving bridges increases as they age and as they reach the end of their intended design life. The actual prioritization for repair or replacement of deficient bridges is at the discretion of state or local transportation agencies.

“Connecticut’s bridges are a critical component of the state’s transportation system, providing crucial connections for personal mobility, economic growth and quality of life,” said Will Wilkins, TRIP’s executive director. “Without increased and reliable transportation funding, numerous projects to improve and preserve Connecticut’s aging bridges will not move forward, hampering the state’s ability to efficiently and safety move people and goods.”