America’s Rural Roads Are Deteriorated And Insufficient To Support Economic Growth And Mobility Demands. Rural Traffic Fatalities Are Three Times Higher Than All Other Roads.

America’s rural heartland is home to approximately 50 million people and its natural resources provide the primary source of the energy, food and fiber that supports the nation’s economy and way of life. But, according to a new report, the roads and bridges that serve and connect the nation’s rural areas face a number of significant challenges, including inadequate capacity to handle the growing levels of traffic and commerce, limited connectivity, the inability to accommodate growing freight travel, deteriorated road and bridge conditions, a lack of desirable safety features, and a traffic fatality rate far higher than all other roads and highways. The report, “Rural Connections: Challenges and Opportunities in America’s Heartland,” was released today by TRIP, a national non-profit transportation research group based in Washington, D.C. It defines Rural America as all places and people living outside the primary daily commuting zones of cities with 50,000 people or more. 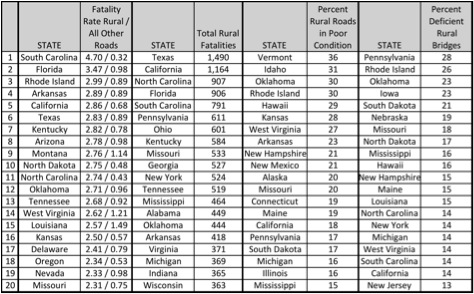 “The safety and quality of life in America’s small communities and rural areas and the health of the nation’s economy ride on our rural transportation system.  This backbone of the heartland allows mobility and connectivity for millions of rural Americans and provides crucial links from farm to market, moves manufactured and energy products, and provides access to countless tourist and recreational destinations,” said Will Wilkins, executive director of TRIP.  “But, with long-term federal transportation legislation stuck in political gridlock in Washington, America’s rural communities and economies could face even higher unemployment and decline.  Funding the modernization of our rural transportation system will create jobs and help ensure long-term economic development and quality of life in rural America.”

“Congress must not delay in passing a robust, multi-year highway and transit bill in order to address the transportation challenges faced in rural America and the nation as a whole. The reauthorization of SAFETEA-LU is a key opportunity to move U.S. infrastructure into the 21st century, bolster economic recovery efforts, and improve the quality of life in every corner of our nation,” said John Horsley, executive director of the American Association of State Highway and Transportation Officials (AASHTO).

America must adopt transportation policies that will improve rural transportation connectivity, safety and conditions to provide the nation’s small communities and rural areas with the level of safe and efficient access that will support quality of life and enhance economic productivity. This can be done, in part, by modernizing and extending key routes to accommodate personal and commercial travel, improving public transit access to rural areas, implementing needed roadway safety improvements, improving emergency response times, and adequately funding state and local transportation programs to insure sufficient preservation and maintenance of rural transportation assets.

America’s rural heartland plays a vital role as home to a significant share of the nation’s population, many of its natural resources and the primary source of the energy, food and fiber that supports America’s economy and way of life.  The strength of the nation’s rural economy relies greatly on the quality of its transportation system, particularly its roadways, which link rural America with the rest of the U.S. and to markets in other nations. The economy of rural America, which supports the quality of life for the approximately 50 million Americans living in small communities and rural areas, rides on the quality and connectivity of the rural transportation system. But roads, highways and bridges in the nation’s heartland face a number of significant challenges:  they carry growing levels of traffic and commerce, lack adequate capacity, fail to provide needed levels of connectivity to many communities, are not built to adequate standards to accommodate growing freight travel in many corridors, have significant deficiencies, lack many desirable safety features, and experience serious traffic crashes at a rate far higher than all other roads and highways.  This report looks at the condition, use and safety of the nation’s rural transportation system, particularly its roads, highways and bridges, and identifies needed improvements to America’s rural transportation system.

The following are the most critical findings of the report.Rural America plays a vital role in the U.S. as home to a significant share of the nation’s population, natural resources and as the primary source of the energy, food and fiber which drives the U.S. economy.

The quality of life in America’s small communities and rural areas and the health of the nation’s rural economy, based largely on the production of energy, food and fiber, is highly reliant on the quality of the nation’s transportation system, particularly its roads, highways and bridges, which provide the first and last link in the supply chain from farm to market.

Increases in domestic energy extraction and the production of renewable energy are increasing the demand on the nation’s rural highway system.

Growing demand for rural mobility, combined with the failure to significantly expand the nation’s rural transportation system, particularly its network of modern highways, has resulted in a lack of adequate connectivity, which is impeding the potential for economic growth in many rural areas.

Traffic fatalities on the nation’s rural roads occur at a rate more than three times higher than all other roads. A disproportionate share of fatalities take place on rural roads compared to the amount of traffic they carry.

Numerous roadway safety improvements can be made to reduce serious crashes and traffic fatalities.  These improvements are designed largely to keep vehicles from leaving the correct lane and to reduce the consequences of a vehicle leaving the roadway.

The nation’s rural roads, highways and bridges have significant deficiencies.

America must adopt transportation policies that will improve rural transportation connectivity, safety and conditions to provide the nation’s small communities and rural areas with the a level of safe and efficient access that will support quality of life and enhance economic productivity.

The following recommendations by TRIP for an improved rural transportation system are also based partially on findings and recommendations made recently by the American Association of State Highway and Transportation Officials (AASHTO),the National Highway Cooperative Research Program (NCHRP), the Council of State Governments (CSG) and the Ports-to-Plains Alliance

Improve the condition of rural roads, highways and bridges

All data used in this report is the most current available.  Sources of information for this report include:  The Federal Highway Administration, the National Highway Traffic Safety Administration, the National Cooperative Highway Research Program, the American Association of State Highway and Transportation Officials, the United States Department of Agriculture, the Council of State Governments and the U.S. Census Bureau.