Roads and bridges that are deteriorated, congested or lack some desirable safety features cost Wisconsin motorists a total of $6.8 billion statewide annually –up to $2,321 per driver in the state’s largest urban areas – due to higher vehicle operating costs, traffic crashes and congestion-related delays. Increased investment in transportation improvements at the local, state and federal levels could relieve traffic congestion, improve road, bridge, and transit conditions, boost safety, and support long-term economic growth in Wisconsin, according to a new report recently released by TRIP, a Washington, DC based national transportation research group.

The TRIP report, “Wisconsin Transportation by the Numbers: Meeting the State’s Need for Safe, Smooth and Efficient Mobility,”finds that throughout Wisconsin, one-half of major locally and state-maintained roads are in poor or mediocre condition and nine percent of locally and state-maintained bridges are structurally deficient. The report also finds that Wisconsin’s major urban roads are becoming increasingly congested, causing significant delays and choking commuting and commerce.

Driving on roads in Wisconsin costs the state’s drivers $6.8 billion per year in the form of extra vehicle operating costs (VOC) as a result of driving on roads in need of repair, lost time and fuel due to congestion-related delays, and the cost of traffic crashes in which roadway features likely were a contributing factor. The TRIP report calculates the cost to motorists of insufficient roads in the Eau Claire, Green Bay-Appleton-Oshkosh, Madison, Milwaukee, and Wausau areas.  A breakdown of the costs per motorist in each area, along with a statewide total, is below.

The TRIP report finds that 31 percent of Wisconsin’s major locally and state-maintained roads are in poor condition and 19 percent are in mediocre condition. Seventeen percent are rated in fair condition and the remaining 33 percent are in good condition.  Driving on rough roads costs the state’s drivers $3.1 billion annually in extra vehicle operating costs, or an average of $747 per driver, including accelerated vehicle depreciation, additional repair costs, and increased fuel consumption and tire wear.

“Until state elected officials are able to agree on long-term, sustainable transportation funding, Wisconsin will be unable to meet mounting needs on our local roads and state highways,” said Daniel J. Fedderly, executive director of the Wisconsin County Highway Association.  “The current funding system causes us to be reactive, responding from one crisis to the next.  We would much rather be working proactively on a shared sense of vision that can move our communities and state forward, and represent our citizens across Wisconsin.”

Traffic congestion in Wisconsin’s major urban areas is worsening, causing up to 41 annual hours of delay for some motorists and costing the state’s drivers a total of $1.9 billion each year in lost time and wasted fuel. 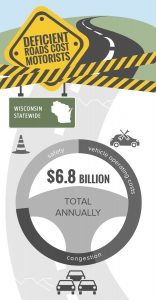 Nine percent of Wisconsin’ bridges are structurally deficient, with significant deterioration to the bridge deck, supports or other major components.

Traffic crashes in Wisconsin claimed the lives of more than 2,800 between 2012 and 2016. Wisconsin’s overall traffic fatality rate of 0.95 fatalities per 100 million vehicle miles of travel is lower than the national average of 1.18.  The fatality rate on Wisconsin’s non-interstate rural roads is nearly two and a half times that on all other roads in the state (1.43 fatalities per 100 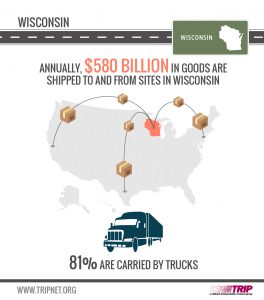 The efficiency and condition of Wisconsin’s transportation system, particularly its highways, is critical to the health of the state’s economy.  Annually, $580 billion in goods are shipped to and from sites in Wisconsin, mostly by trucks, relying heavily on the state’s network of roads and bridges. Increasingly, companies are looking at the quality of a region’s transportation system when deciding where to relocate or expand. Regions with congested or poorly maintained roads may see businesses relocate to areas with a smoother, more efficient and more modern transportation system. The design, construction, and maintenance of transportation infrastructure in Wisconsin support more than 64,000 full-time jobs across all sectors of the state economy.