The Department’s Federal Railroad Administration received 132 applications from 32 states totaling $8.8 billion, more than three times the $2.4 billion available. During the first round of awards in the fall of 2009, applicants submitted more than $55 billion in project proposals for the initial $8 billion from the American Recovery and Reinvestment Act.

“Demand for high-speed rail dollars is intense and it demonstrates just how important this historic initiative is,” said Secretary LaHood. “States understand that high-speed rail represents a unique opportunity to create jobs, revitalize our manufacturing base, spur economic development and provide people with an environmentally friendly transportation option.”

More than 30 rail manufacturers and suppliers, both domestic and foreign, have agreed to establish or expand their bases of operations in the United States if they are hired to build America’s next generation high-speed lines, a commitment the Obama Administration secured to help ensure new jobs are created here at home. 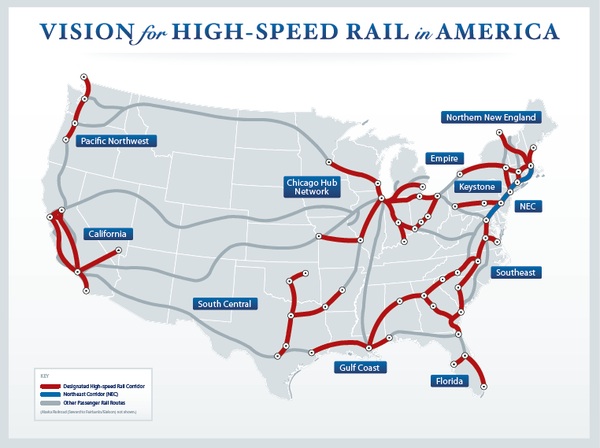 Some award examples include:

California received more than $901 million, including $715 million for the construction of new high-speed rail lines in the Central Valley. The state has made significant investments in passenger rail that have led to remarkable ridership growth;

Florida received $800 million for the Tampa to Orlando high-speed rail corridor. The state’s long-term vision is for a high-speed rail line that connects Tampa, Orlando, Miami and other communities;

Iowa received $230 million to create a new intercity passenger rail service between Iowa City and Chicago through the Quad Cities. When completed, the service will form an integral part of the existing efforts to develop the Chicago Hub intercity rail system in the Midwest; and

Michigan received $161 million for a high-speed rail corridor connecting Detroit and Chicago, the two largest cities in the Midwest. The long-term vision for this corridor includes doubling the number of daily round trips between Detroit and Chicago.

The money is being awarded for a range of activities, such as construction of track and stations, purchase of new passenger equipment, and planning studies to develop new high-speed rail service.

A complete project list can be viewed at http://www.fra.dot.gov/rpd/passenger/2243.shtml

There is also more information on Secretary LaHood’s blog site where you can read more about today’s high-speed rail grant announcements at fastlane.dot.gov