Note: This article appeared in the July 2009 issue of New England Construction, an ACP publication.

Photos Courtesy of the Vermont Agency of Transportation

The recent placement of a thin asphalt overlay on Route 114 in Vermont’s Northeast Kingdom underscores a dramatic change taking place in the way the Agency of Transportation (VTrans) protects its 3200-mile state highway network.

About 13 miles of two-lane Route 114 were overlaid with a ¾- to 1-inch-thick preventative (aka preventive) maintenance course of SBR polymer-modified Superpave mix. This was accomplished in Norton, Averill and Canaan, three towns bordering Quebec, Canada that are as far north and east as one can travel in Vermont and which experience temperature extremes and significant snow accumulations. The work was broken into two contracts. One contract, performed in fall 2008 by Pike Industries, involved 6.3 miles of road located entirely within Canaan. The other contract, also won by Pike Industries, was performed in spring 2009 and covered approximately 6.9 miles within the three towns.

The SBR polymer-modified mix was produced at Pike’s Waterford, Vermont batch plant. The contractor applied a tack coat on the existing

pavement at the rate of .08 gallons per square yard before placing the thin overlay mix, using a CAT 1000B paving machine in 2008 and a CAT 1055D in 2009,  both of which were equipped with Carlson IV screeds. For compaction, Pike’s crew employed a HYPAC 778 breakdown roller, a CAT 334 secondary roller and a HYPAC 766 finish roller. All rollers were equipped with vibratory capability if needed.

Thin Vs. Mill And Fill

Two aspects of these contracts signal the changing VTrans philosophy. First, the contract documents called for bids on two alternate preventative maintenance techniques, a relatively recent but growing practice.  And second, neither of the alternates was the time-honored “mill and fill” operations whereby a specified depth of existing pavement, usually 2 inches or more, is removed and replaced with an equal depth of hot mix asphalt (HMA).

Instead of requiring bids for mill and fill, a staple practice for many years, VTrans called for bids on two thin treatments. Alternate A was a standard VTrans 4.75mm (3/16-inch stone) Superpave mix using performance-graded PG 64-34 asphalt binder, with a specified placement depth between ¾ inch and one inch. A performance-graded asphalt binder of 64-34 must perform satisfactorily under anticipated traffic throughout a range of plus 64 to minus 34 degrees Centigrade (plus 147 degrees and minus 29 degrees Fahrenheit).

Alternate B called for a 6.3mm (1/4-inch stone) special provision SBR polymer-modified Superpave mix using PG 58-34 binder, also with a specified placement depth of between ¾-inch and one inch. The PG 58-34 binder grade is the designation prior to adding the polymer, since the modifier actually expands the effective temperature range of the binder.

Pike Industries, the only bidder for the project, proposed its lowest price for Alternate B, the SBR modified Superpave. Its bid of $1,251,889 amounted to $198,397 per mile of road.

Choices Up, Bid Prices Down

A few months later, in May 2009, Pike won the second Route 114 contract, beating out All States Asphalt. This time, both companies were required to bid on two alternates. Alternate A called for a VTrans special provision Paver-Placed Surface Treatment Type C (aka Novachip) using PG 58-34 binder, with a 5/8- to ¾-inch specified placement depth. Alternate B was the same as Alternate B of the 2008 bidding, the SBR-modified Superpave mix. The lowest bid for both companies was for Alternate B, and the companies’ bids were very close for both alternates. Pike left only 3.25 percent on the table.

Why the substantial decrease in cost for the same treatment on the same road a few months later?

“Approximately three years ago, we began introducing bid alternates for preventive maintenance jobs, and we began seeing an influx of specialty contractors new to this area in the bidding process,” said Fowler. The competition, alone, has generated some cost savings, and the alternate surface treatments themselves are proving to be more cost efficient than mill and fill operations, he said.

Fowler pointed out that the fundamental pavement management philosophy of VTrans is to “keep good roads good,” and one budget-saving way to do that is to employ new thinner mixes that provide equal performance but are less expensive based on annualized life cycle cost.  This is

calculated by dividing the cost of a project by the anticipated service life in years. For example, if one type of treatment bid on a project costs $2 million and has a service life expectancy of five years, yielding an annualized cost of $400,000, while an alternate initially costs $3 million but will extend the pavement life by eight years, the alternate’s annualized life-cycle cost of $375,000 is more cost-efficient.

Thin preventive maintenance treatments fall under the general mantle of pavement preservation. According to the Federal Highway Administration (FHWA), an effective pavement preservation program addresses pavements while they are still in good condition, before the onset of serious damage. The cumulative effect of aging, weather and abrasion is postponed, and the pavement can continue to provide a safe, smooth and cost-effective service to the taxpayer. This proactive and systematic preservation treatment postpones costly rehabilitation and reconstruction. In other words, it keeps good roads good.

Fowler said he has become thoroughly acquainted with various surface maintenance treatments through his attendance at meetings sponsored by the Northeast Pavement Preservation Partnership (NEPPP). Comprised of transportation officials, contractors, consultants, materials suppliers and members of academia, NEPPP promotes the benefits of pavement preservation and encourages members to share their research, design and construction methods. It was established with help from the National Center for Pavement Preservation (NCPP) in conjunction with the American Association of State Highway and Transportation Officials (AASHTO) and the FHWA.

Attending these meetings has enabled him to network with others involved in pavement preservation, and their shared experiences have proven to be an invaluable educational tool, said Fowler. He noted that such networking led to the use of New York Department of Transportation specifications for polymer-modified thin lift overlays, tailored to Vermont conditions, which comprised the Alternate B successfully bid on by Pike Industries for the Route 114 preventive maintenance project.

Polymer modification of asphalt binders and emulsions is being seen increasingly in the industry, in particular for thin lift preventive maintenance overlays such as used on Route 114, according to Fred Mello, a representative for Rub-R-Road. Mello provided SBR (Styrene Butadiene Rubber) latex manufactured by BASF Corporation to Pike Industries plus the mechanism for introducing the latex into the producer’s Barber Greene 4-ton batch plant in Waterford, Vermont.

Consisting of a pump, metering and injection system, this relatively compact unit fits on a pallet and is easily transported from plant to plant. Mello said that in the plant, the SBR latex, which itself is modified with warm-mix technology, was injected into the asphalt binder exactly ten seconds after the binder came into contact with the heated aggregate. That timing is crucial to the success of the process, he said. And warm-mix technology allows the mix to be created and laid down at conventional temperatures. Without the technology, the polymer-modified binder would be so viscous the mix would have to be made and placed at 20 to 40 degrees Fahrenheit above conventional temperatures.

That viscosity is a key reason the binder is so effective in the field, he added.

“Thin mixes are not structurally capable of resisting loads in extreme temperatures,” he said. “But adding the SBR latex makes the mix stiffer in summer and more flexible in winter, and better able to absorb stresses imposed on the pavement,” Mello said. 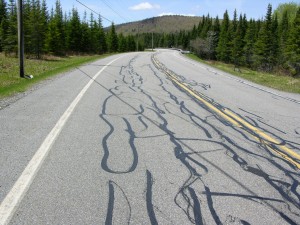 View of Route 114 which has been extensively crack-sealed in preparation for the thin asphalt overlay.

Flexibility in cold weather is especially important in Vermont’s Northeast Kingdom, where winter temperatures can be Arctic-like. As a case in point, the lowest temperature ever recorded in New England occurred in the Kingdom’s Essex County, in the Town of Bloomfield, about 15 miles south of Canaan. It was December 30, 1933, and the temperature registered 50 degrees below zero.