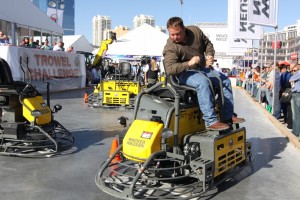 Wacker Neuson’s World of Concrete booth will once again be a show destination for concrete finishers.  The third annual Wacker Neuson Trowel ChallengeTM competition will take place during the World of Concrete, January 18-21, 2011, Las Vegas.  The grand prize, a customized Wacker Neuson CRT 48-35VX ride-on trowel powered by a special Vanguard BIG BLOCK V-twin engine will be awarded to the fastest finisher.

Held in Wacker Neuson’s outdoor exhibit, (#O30247, silver lot) the ride-on challenge tests the operator’s entire range of skills as the participant maneuvers around an obstacle course that weaves throughout a 2,400 square foot slab.  The 2010 winner, Lee Hadenfeldt, H&H Concrete and Construction, Doniphan, NE, finished with a two-run combined winning time of 68:16.

Preliminary trowel challenge competitions will be held at the World of Concrete during show hours on Tuesday through Thursday, January 18-20, 2011.  The top 10 times from the preliminaries will advance to the finals at Thursday January 21 at 3:00 p.m. and compete for the grand prize.  All registered World of Concrete contractor attendees are eligible to compete on a first-come, first-serve basis.

The 2011 ride-on concrete trowel grand prize has been donated as a joint venture between Briggs & Stratton Commercial Power and Wacker Neuson. Contractors in select U.S. cities can see this special edition trowel as it follows a tour route to World on Concrete.  The ride-on trowel will be on display at dealer open houses until it reaches Las Vegas in January.

Wacker Neuson will offer free exhibits-only admission information to World of Concrete during the dealer events. Additionally, one lucky contractor per event will be registered as a semifinalist for win a free WOC package including airfare and hotel stay in Las Vegas during the show.