Housing starts, once again, came in below expectations, with overall starts falling 6.5 percent in May to a 1.001 million unit pace. Single-family starts fell 5.9 percent, while multifamily starts tumbled 7.6 percent

“If I don’t get some shelter Oh yeah, I’m gonna fade away” Rolling Stones 1969

While conditions are not quite as dire as they were when the Rolling Stones released “Gimme Shelter” back in 1969, hopes that this year would mark the break-out year for new home construction are rapidly fading away. The spring selling season is, once again, proving to be a bust, as new home sales and housing starts have failed to rally in the most important selling and building season of the year. Overall, starts fell 6.5 percent in May, as both single-family and multifamily starts declined during the month. Starts fell in every part of the country except the South, where they posted a fairly healthy 7.3 percent gain.

The Economy Needs a Lift from Housing

The increase in homebuilding in the South, where lots are more widely available, was one of the few bits of good news in this month’s report. Housing starts tumbled 25.2 percent in the Northeast, fell 16.5 percent in the Midwest and declined 16.3 percent in the West, where buildable lots are particularly scarce. While declines in multifamily starts account for much of the drop, single-family construction also fell in all three regions, with particularly large declines in the West, where they fell 22.2 percent and the Midwest, where single-family starts fell 9.6 percentThe economy certainly could use a lift from the housing sector. Housing starts have improved modestly over the past few years, but the recovery has been much slower than in previous business cycles. In fact, most of the improvement has come from the apartment sector, which provides less of a boost to employment and aggregate economic activity. As disappointing as the data have been, housing starts through the first five months of this year are running slightly ahead of their year-ago pace, with overall starts up 6.6 percent and single-family starts up 2.5 percent. That is not the increase we were hoping for, but is a little better than the general perception, particularly given the harsh weather at the start of the year.

Housing Needs a Lift from the Economy

While the NAHB/Wells Fargo Home Builders’ Market Index posted a solid 4-point gain in June, we do not expect conditions to materially improve that quickly. Housing permits fell 6.4 percent in May and, while all of May’s drop was in multifamily units, both single-family and multifamily permits are running slightly below the current level of starts. New home demand will need to get more of a boost from stronger economic growth. The number of quality jobs added so far in this recovery has been more supportive of apartment demand than single-family homes. 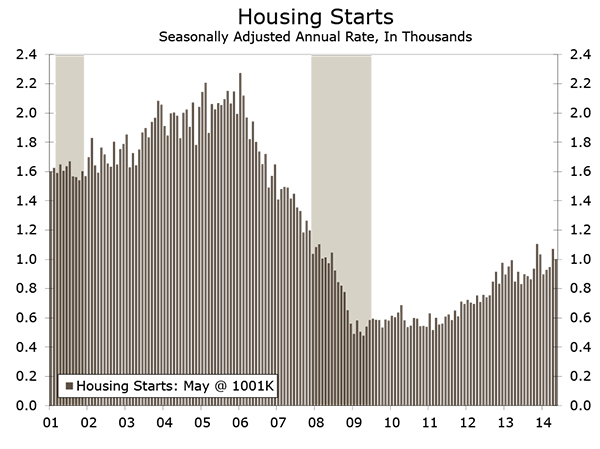 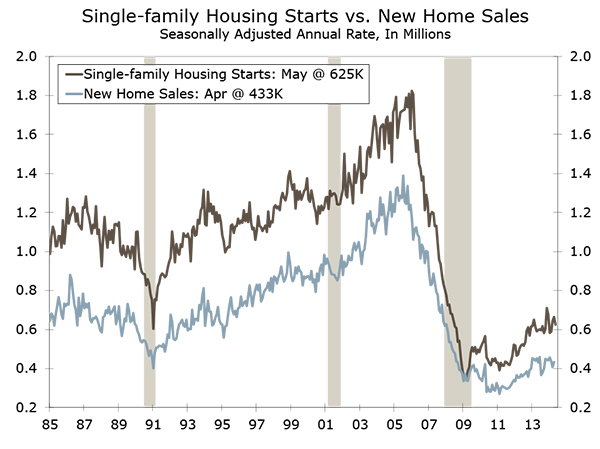 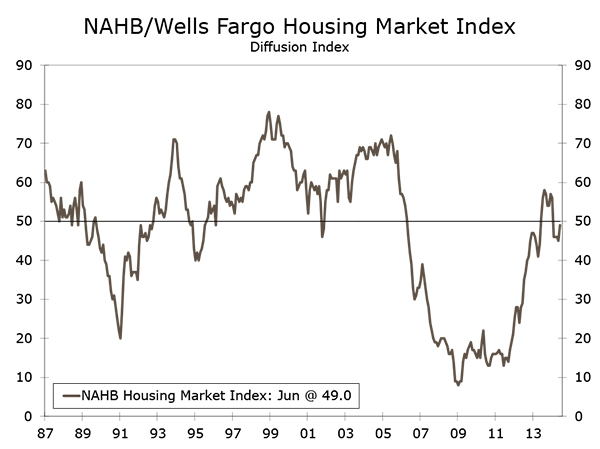