New Jersey payroll employment slipped by 17,500 jobs in March while February’s gain was revised down to 10,900 jobs. The unemployment rate still dropped to 4.2 percent in March, matching its pre-recession low.

Similar to the U.S. jobs report, March was a disappointing month for nonfarm payrolls in New Jersey, but the unemployment rate continued to drop. Nonfarm payrolls declined by 17,500 jobs during the month, with losses fairly broad based across the private sector. The largest cuts were in leisure & hospitality, professional & business services and trade, transportation & utilities. Some of the softness may have been temporary or weather-related, as the state was hit by a large winter storm during the March survey week. Most of the state’s major employment sectors added to payrolls over the past year, although construction hiring appears to have pulled back at bit, which bears watching.

New Jersey’s household employment data was less impacted by the weather and was much more positive. Notably, the state’s unemployment rate fell 0.2 percentage points to 4.2 percent which matched its pre-recession low. Civilian employment rose by 9,800 workers, while the labor force declined slightly. As a result, the number of unemployed declined. New Jersey’s unemployment rate is the lowest since May 2007. The state’s labor force participation rate is 2.7 percentage points lower, however.

Benchmark revisions reveal that New Jersey payroll employment had actually surpassed its previous cycle high in September 2016, contrasting with previously published data. Now that the state has passed this milestone, we looked at how New Jersey’s employment base has changed over the past decade. Manufacturing employed 80,000 fewer workers in 2016 than in 2006, while government payrolls were down by 35,000 jobs. The combination of fallout from the housing bust and automation erased thousands of jobs in the finance, information and construction industries. A decade ago, New Jersey housed back office operations of financial firms in New York City— jobs vulnerable to automation and streamlining. Similarly, most of the decline in the information industry was in telecommunications and print publishing—sectors also impacted by changing technology.

New Jersey’s employment base is now more diverse, making it less exposed to industry-specific declines than a decade ago. The bottom chart illustrates that declines in government, manufacturing, construction, finance and information jobs were offset by gains in a broad spectrum of industries. Ambulatory health care, which includes outpatient care and doctors’ offices, saw the largest increase over the decade, followed by professional services, education and food services. Although it took New Jersey more than two years longer than the nation to rebuild its job base after the Great Recession, the diversification of the Garden State’s industrial base should make the state a little less cyclical than it has been in the past. 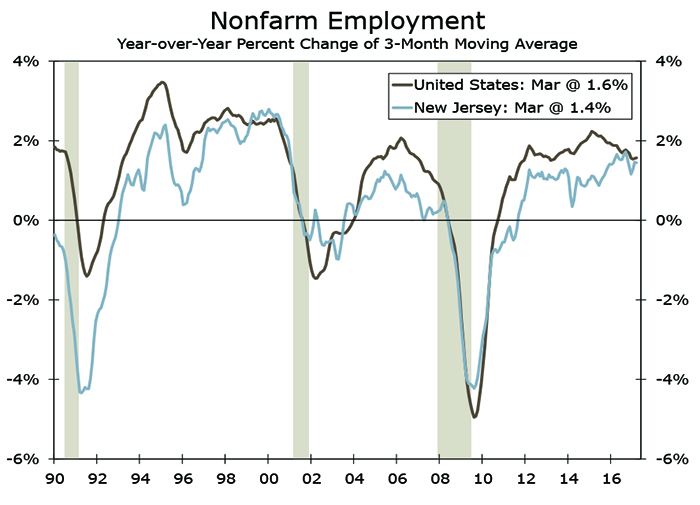 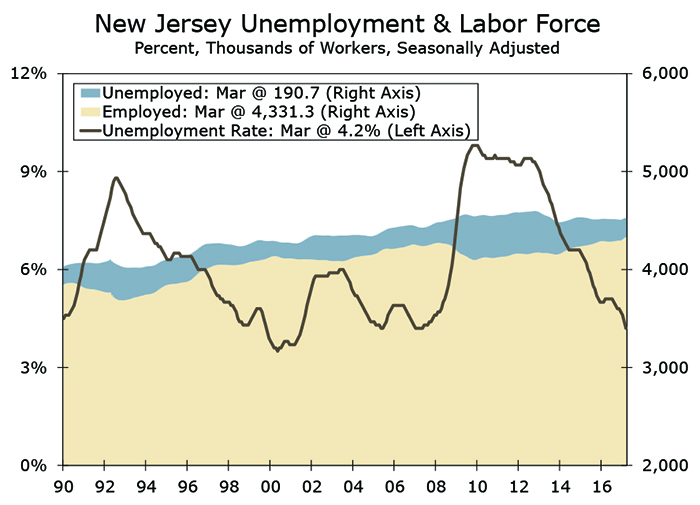 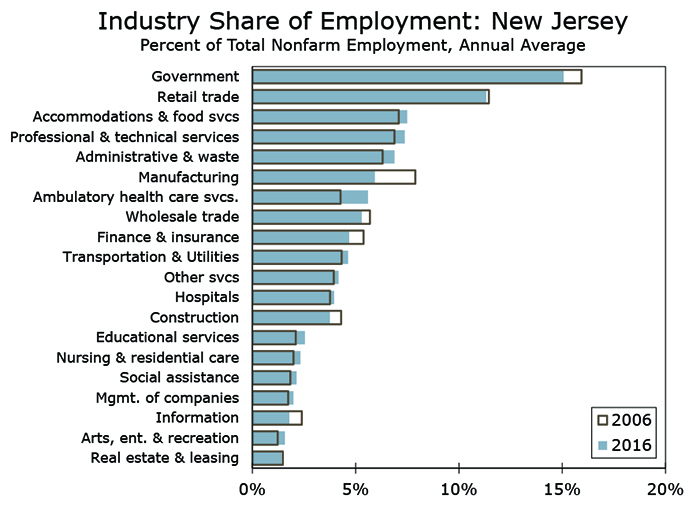