In fact, residential construction spending in May reached the highest level since October 2008. While some of the improvement in residential is due to accommodative monetary policy, there are clear signs a genuine recovery in the sector is underway. 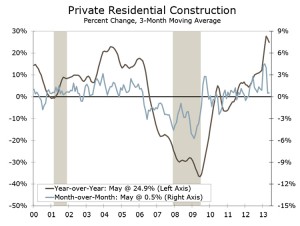 Single-family outlays have now posted a positive reading since June 2011, and price increases in existing and new homes continue to fuel new home construction. That said, improvement in builder sentiment continues to reaffirm the strength in the sector.

According to the NAHB/Wells Fargo housing market index, more builders saw conditions as “good” than “poor” in June, which was the first time above this threshold since April 2006. Moreover, sales activity continues to be robust and the share of distressed transactions are continuing to decline. While some of the strength in prices will likely wane as more inventory comes on line and investor activity in hard-hit markets has peaked, we look for residential investment to contribute to headline economic growth. Multifamily and home improvements also showed improvement on the month.

Regarding private nonresidential, manufacturing outlays accounted for much of the pullback on the headline. Within manufacturing, the decline was fairly broad-based, but computer, electronics and electrical, which make up about 10 percent of total manufacturing fell 39 percent on the month. On a year-ago basis, this component is down nearly 60 percent. On the other hand, chemical manufacturing which is the largest component of manufacturing construction increased 2.1 percent and is up 50.5 percent over the past year. However, the boost in this sector was not enough to offset weakness in other manufacturing components. 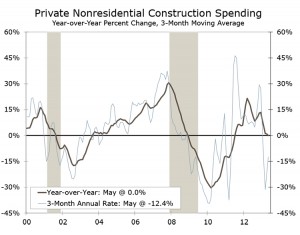 Public outlays also improved in May with state and local construction spending helping to boost the headline. As expected, we continue to see very little impact from sequestration.

Looking Ahead: Nonresidential Improvement Will Be Modest

We expect residential to continue to improve in the coming quarters. However, nonresidential outlays could show weakness as one of the key leading indicators dipped below a critical threshold. Architectural billings for commercial/industrial projects declined to a reading of 47.5 in May, while institutional remained above breakeven. This foreboding sign suggests that any increase in nonresidential will be modest. 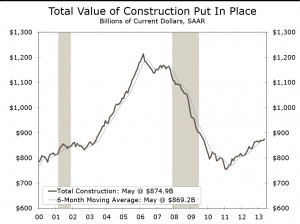