In our view, September is the month we begin to see the first signs of the impending normalization of Federal Reserve policy on interest rates. The result is likely a gradual flattening of the yield curve.

Upward Migration in the Short End of the Curve

The September 17th FOMC policy announcement will likely be the key signal to markets that the first fed funds rate hike is on the horizon. For starters, the Fed will release an updated set of economic projections that will shed light on the Committee’s view of both the pace of labor market improvement and its outlook for inflation, either of which may provide a clue to a clearer policy normalization timeline. We expect a change in the language of the FOMC’s statement to reflect the stronger labor market conditions, but more importantly, we expect the Fed will no longer signal that rates will remain low for “a considerable period of time” following the end of the asset purchase program. We believe this shift in language will be enough of a signal for markets to begin gradually pricing in higher short-term rates. Thus, our expectation is that short-term rates will continue to migrate higher later this month and through the end of the year as the first fed funds rate hike in June of 2015 approaches (top graph).

The Longer End of the Curve Should Remain Anchored

The steepness of the Treasury curve continues to come down (middle graph). Specifically, the spread between the 30-year bond and the 2-year note has now come down to its lowest level since December 2012. The story at the longer end of the yield curve remains one of stronger demand for longer duration Treasuries. Between ongoing geopolitical risks, purchases from foreign central banks and new capital requirements, demand for 10-year and 30-year Treasuries remains robust, putting downward pressure on yields for these bonds. Going forward, we expect that demand for longer-duration Treasuries will continue to weigh on the longer end of the curve. When robust demand at the long end of the curve is combined with the effects later this month of gradual pricing in of normalization in Fed policy, we expect to see a further flattening of the yield curve over the next several months (bottom graph).

This week marks the publication of our 2016 economic and interest rate outlooks (next page). We have left our 2015 rates forecast largely unchanged from last month, with the Fed increasing the fed funds target rate by 25 bps each quarter beginning in June 2015. Our expectation is that the yield on the 10-year Treasury will end 2015 at 2.89 percent. In 2016, we expect that the Fed will begin to increase the pace at which they raise the target rate. We expect 50 bps moves in the fed funds target rate throughout 2016 given our top-line GDP forecast north of 3 percent and an unemployment rate around 5.4 percent. 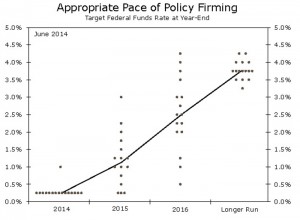 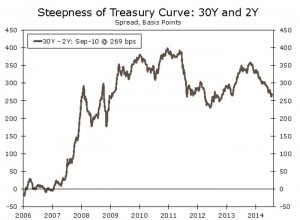 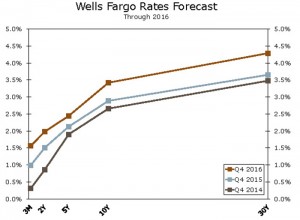 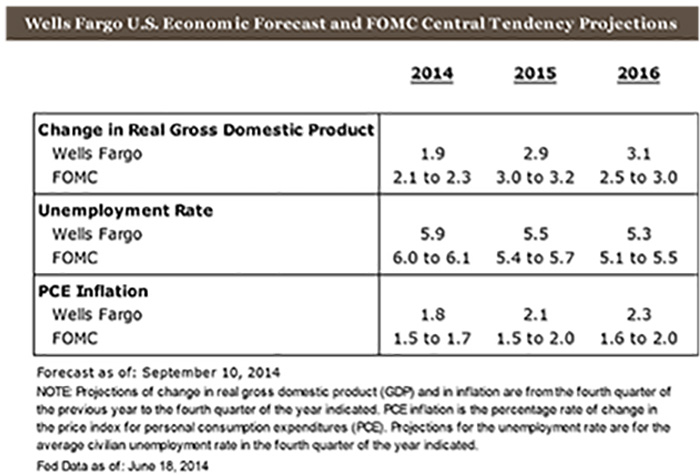