Construction spending rose 0.6 percent in July, which shows consistent improvement. While private residential and nonresidential spending increased on the month, public outlays were down 0.3 percent. Third Quarter Off to a Good Start

Construction outlays rose 0.6 percent in July to a $900.8 billion annualized pace. Previous months’ data were also solidly upwardly revised. Further confirming upward momentum in the housing market, private residential spending was up 0.6 percent and has posted positive gains since October 2012. Digging into the details of private residential, gains were broad-based with single-family, multifamily and home improvement all increasing on 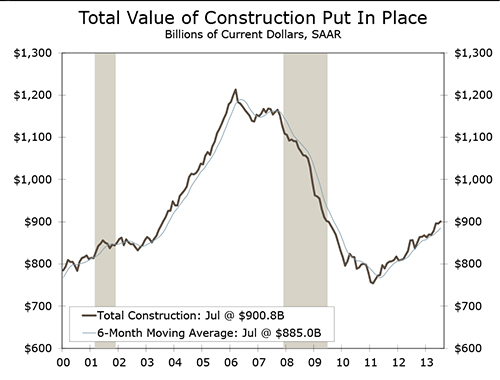 Gains in private residential spending continue to reaffirm strength in the housing market. Builder sentiment remains solid and has shown consistent increases over the past four months. The level is now the highest since late 2005, with more builders seeing conditions as “good” than “poor”. That said, other monthly housing market indicators appear to be at odds with construction spending and sentiment. Single-family housing starts and permits both declined in July, and new home sales plunged on the month. We suspect that recent weakness in 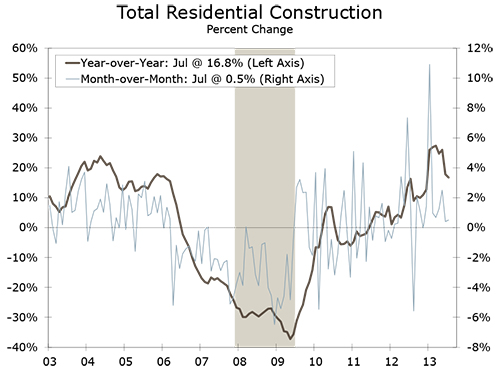 starts and new home sales activity is only temporary and not the beginning of a trend. Indeed, while some of the slowdown on the month can be blamed by the rapid increase in mortgage rates, we suspect that extremely damp weather in the South attributed to some of the weakness in new home sales activity. With the housing recovery continuing to be driven by fundamentals, we expect further gains in single-family outlays in the coming months.

Multifamily spending has also seen a string of positive gains. The apartment vacancy rate is now at its lowest level in more than a decade at 4.3 percent, and demand remains fairly robust across the country. Deliveries are expected to pick up in the coming quarters and activity should remain solid. 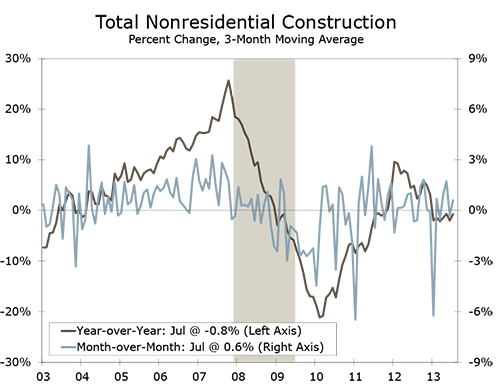 Private nonresidential outlays have been somewhat of a moving target in recent quarters with revisions quite sizeable. At last, July’s revision to previous months’ data suggest structures will contribute a little more to real GDP growth in the second quarter, all things equal. The July report also suggests that the third quarter is off to a good start. Lodging, commercial and power were some of the largest contributors to the headline. Looking ahead, architectural billings, which typically lead construction spending by about a year, posted its third monthly increase in July.