March registered a weak gain in jobs and prior months were revised downward. This indicates that weather did have an impact and reinforces our view that first quarter GDP will come in around just one percent.

Job Growth Falls Back to Earth

Job growth slowed in March, as nonfarm payrolls increased 126,000. Over the past three months, employment gains have now averaged 197,000—a more modest pace than over the second half of 2014. This is more consistent with our expectations of 0.9 percent growth in the first quarter compared to the previously reported January and February average of 276,000.

Job gains were still recorded in a broad set of sectors, including professional & business services, education & health services, finance, leisure & hospitality and retail, but the pace of gains was more modest (top graph). Mining sector employment fell again in March, down 11,000. Manufacturing payrolls edged down by 1,000, with the workweek ticking down, suggesting some modest impact from the stronger dollar.

The unemployment rate and employment-population ratio held steady at 5.5 percent and 59.3 percent, respectively, even as the labor force participation rate edged down to 62.7 percent.

Hours Worked Edge Down But Still Supportive of Growth

The average workweek fell back to 34.5 hours, but the drop was largely concentrated in the goods-producing sector and the transportation and leisure & hospitality sectors. These industries have greater exposure to the impact of the port shutdown and related supply chain bottlenecks, as well as weather, the dollar and the drop in oil prices. On a three-month average annualized basis, total hours worked have risen at a 2.2 percent rate, down 0.2 percent in March (middle graph). So, while overall economic growth will continue, the first quarter will likely be the weakest quarter this year.

One piece of the report that came in better than expected was average hourly earnings, which rose 0.3 percent in March. The gain puts the year-ago rate back at 2.1 percent, roughly in line with the pace of wage growth over the past year. In the past few months, some large companies have made headlines with plans to increase wages for their lowest-paid workers. Given that many of these companies are in the retail and hospitality industries, which pay the lowest average hourly wages among major industries, the effect on overall wages is likely to be muted and lagged. That said, it is another indication of the labor market tightening. In addition, not only are large businesses raising wages, but small businesses have been planning to increase wages at a rate that would suggest an acceleration in average hourly earnings (bottom chart). With job gains continuing to run well ahead of labor force growth, we expect tightening in the labor market to continue and for wage growth to pick up over the course of the year. 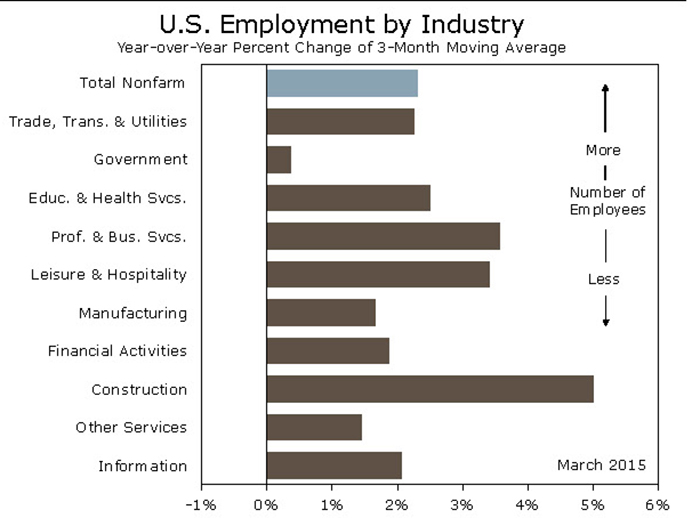 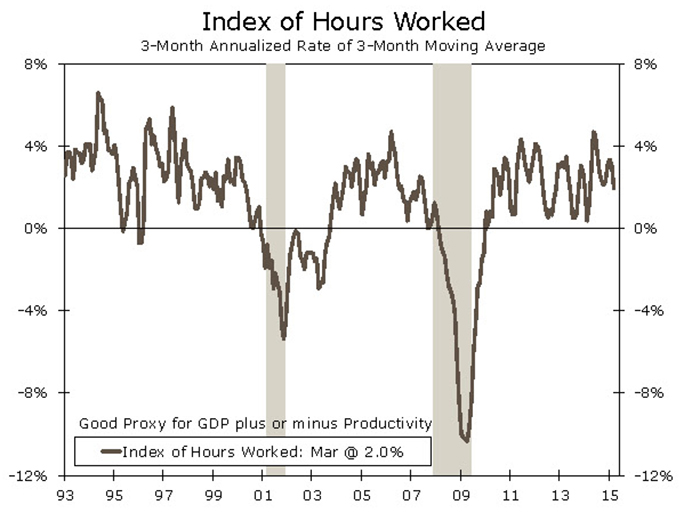 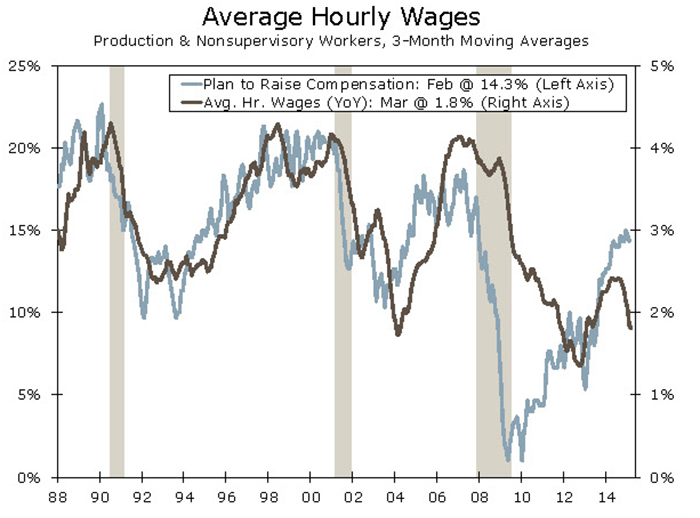