Housing starts rose 6.3 percent in September, pulling the annual pace of new home construction back above the 1 million mark. Permits also increased during the month and are now running roughly even with starts. Housing Construction Remains on the Road to Recovery

September’s housing starts and building permits data came in roughly in line with expectations. Starts rose 6.3 percent, with multifamily starts bouncing back 16.7 percent and single-family starts rising 1.1 percent. With the rebound, overall housing starts have risen back above the critical million-unit mark for the second time in the past three months and have averaged a 1.024 million-unit pace over this period. On a year-over-year basis, housing starts look even stronger, with overall starts up 17.8 percent from last September. The year-ago numbers, however, were exceptionally weak, having given way after demand dried up following the Spring 2013 ‘Taper Tantrum” run-up in mortgage rates.

Year-to-date (YTD) sales provide a better approximation of the strength of the housing market. Overall starts have totaled 761,000 units through the first nine months of this year, which is 9.5 percent higher than the same period last year. If we were to hold that pace through the end of the year, that would translate into 978,000 starts for 2014. Our forecast is slightly higher than that, calling for 990,000 starts. Multifamily units accounted for most of the increase, with YTD starts up 22 percent. Apartment construction likely accounts for most of that gain, as the bulk of the increase in multifamily starts has been in projects with 5 units or more. Starts of single-family homes are also running slightly ahead of their year-ago pace, with YTD single-family starts up 3.8 percent from 2013.

Building permits rose slightly more than expected, rising 1.5 percent. Multifamily units accounted for all of that gain. There appears to be a rush to get new apartment projects started while financing is flowing relatively easily. Indeed, many of the most active apartment markets are beginning to look a little boom-like. Apartment vacancy rates remain low, but have likely bottomed for the cycle. We still expect the level of multifamily starts to remain strong, however, as increased condominium and townhome construction offsets any cutback in apartment starts.

Permits for new single-family homes fell 0.5 percent in September and have now fallen by about that magnitude for three straight months. While the declines have all been relatively modest, single-family permits are now running slightly below starts, suggesting that starts may decline slightly in the coming months. The drop is not all that surprising. New home inventories have picked up slightly in recent months and sales momentum appears to be slowing. The Wells Fargo/NAHB Home Builders Index fell 5 points in October, with buyer traffic showing a modest drop. Builders are still upbeat about future sales, however, and the recent drop in mortgage rates and moderation in home prices should help reverse the recent slide in housing affordability. 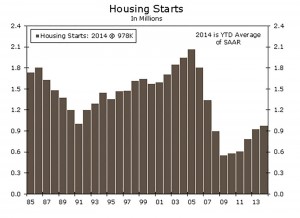 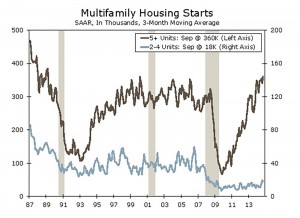 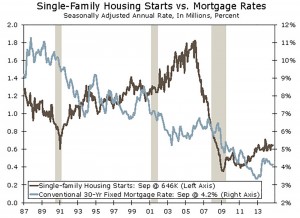