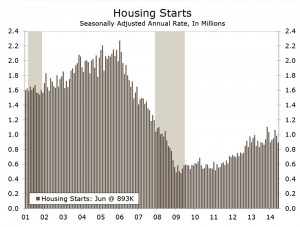 Housing starts came in much weaker than our below-consensus forecast, and activity for May was revised down as well. While residential construction activity has clearly been disappointing, we believe the latest numbers overstate the extent of the weakness.

Housing starts rose in every region of the country except the critically important South, where they plunged 29.6 percent. The drop in the South seems odd given the region’s strong economic performance. Job and income growth have generally been robust in the South. Population growth has also increased, particularly in the region’s major markets such as Texas, Florida, Atlanta, Nashville and the Carolinas. The NAHB Homebuilders’ Survey did not detect any weakness in the South during the past few months, posting a 5-point rise in June and tacking on another 1-point rise in July. The decline in housing starts in the South is also out of proportion relative to permits, which have declined in recent months but were nearly 23.5 percent higher than starts in June. The large gap between permits and starts suggests that something is odd in the June housing starts data for the South, and that we should see a rebound in July. 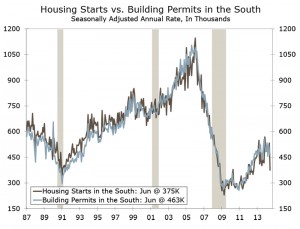 Even with June’s disappointing figures, overall housing starts and single-family housing starts through the first six months of 2014 are running slightly ahead of their year-ago pace. That is a sore consolation considering the disappointing housing activity in 2013. This year’s numbers, however, were held back by the harsh winter weather. The rebound from that period may have wreaked havoc with the seasonally-adjusted data. The greater problem for housing moving forward is lackluster demand for new single-family homes and shortages of lots, materials and labor in many of the strongest markets. The apartment market also appears close to topping out, with vacancy rates beginning to inch up and a multitude of projects on track to be completed in coming years. Permits for new multifamily projects fell 14.9 percent in June, following a 15.6-point plunge in May. 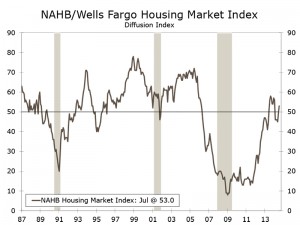 While it is hard to ignore June’s weak housing starts data, homebuilders do appear to be a bit more optimistic. The NAHB survey came in stronger than expected in July and builders reported both stronger current and future sales and increased buyer traffic. June’s drop in starts strikes us as odd and we expect a rebound in coming months.