Housing starts rose 5.9 percent in July to an 896,000-unit pace, with all of the gain coming from multifamily units. Single-family starts fell 2.2 percent and were likely held back by rainy weather in the South.

Wells FargoHousing Is Likely Stronger than the Latest Figures Suggest

Housing starts posted a modestly disappointing 5.9 percent rise in July, as starts of multifamily units (mostly apartments) jumped 26.0 percent and starts of single-family homes fell 2.2 percent. The weakness in single-family starts is somewhat surprising in light of the recent upbeat reports from the nation’s major homebuilders. The Wells Fargo/NAHB Homebuilders Index rose 3 points to 59 in August, which is the highest it has been since 2005. We suspect that continued rainy weather in the South, which accounts for more than half of the nation’s new single-family homes each year, is behind the disappointing number. Single-family starts fell 4.6 percent in the South during July. Single-family starts also fell sharply in the West, dropping 9.8 percent, but rose in the Northeast and Midwest. 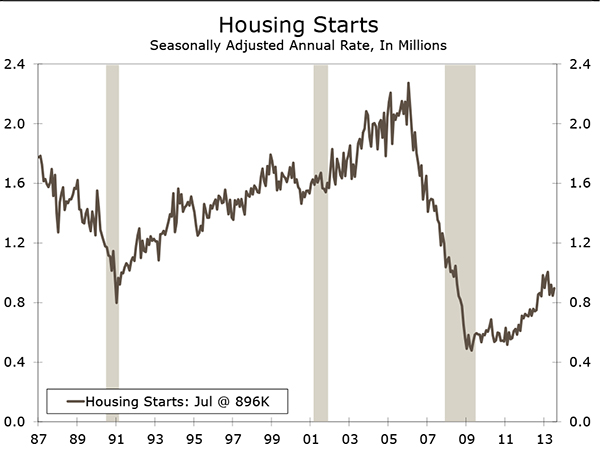 The wet weather also meant that fewer single-family homes were completed in the South during July. The South saw single-family completions fall 7.4 percent in July and was the only region where completions fell that month. Completions in that region also fell slightly in June. On a national basis, completions of single-family homes rose 5.9 percent in July, and through the first seven months of this year are running 22.8 percent ahead of their year-ago pace. The slowdown in completions in the nation’s largest housing market may also influence new home sales over the next couple of months. Inventories of new homes have been exceptionally lean over the past few years and with few homes to choose from, some buyers may hold off purchasing a new home. 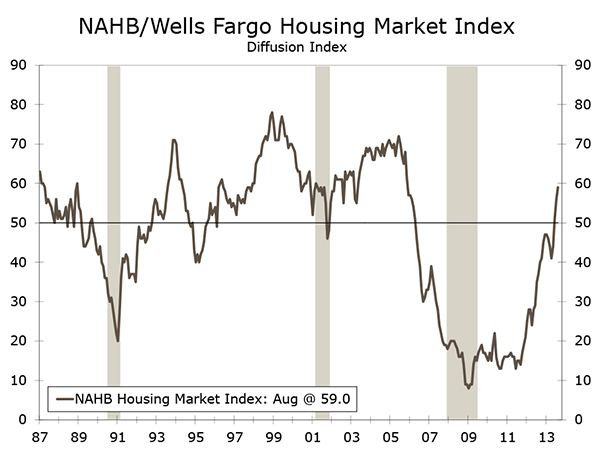 Wet weather may not be the only explanation behind the drought in starts. Builders are reporting difficulty securing materials and labor to build new homes, which has resulted in rising backlogs, particularly in the West and South. Permits for new single-family homes, which tend to be less dependent on the weather, fell 1.9 percent in July. Even with the drop, single-family permits are still running slightly ahead of starts, suggesting that we should see some catch-up in construction activity later this year. 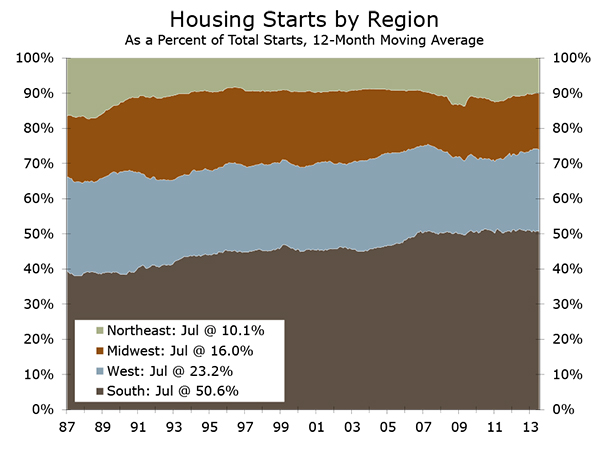 In contrast to the slow recovery in single-family homes, apartment construction remains red-hot. Multifamily starts jumped in July to a 305,000-unit pace. The largest percentage gains were once again in the Northeast and Midwest, while the largest absolute gain was in the West. By contrast, multifamily starts in the South fell nearly 15 percent during the month, despite strong demand in most of the region’s major apartment markets. The weakness in both single and multifamily starts in the South is likely a bit of a head fake and may set the stage for surprising robust gains later this year, when the seasonal adjustment process tends to expect building activity to slow. Such an outcome seems all that more likely given that both builder sentiment and apartment demand have continued to strengthen in the region.